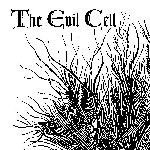 THE EVIL CELL: S/T
Self financed release. Evil Cell is the “”baby”” of speed metal guitar player Eric Sperr. (Do you already get the idea of how this one sounds?) The music is solid. Interesting cover version of the Led Zeppelin classic “”Immigrant Song””.

The Evil Cell embodies a range of styles. For example, opener “”Just Out of Reach”” starts with a Santana-like riff before venturing into Atheist-esque old school death metal.
Elsewhere, is strongly influenced by industrial, while a cover of Led Zeppelin’s “”Immigrant Song”” adds a rock flavour to the mix. But all this is mere background noise for the true focus of the demo, namely Eric Sperr’s considerable guitar playing skills, with leads and virtuoso guitar playing. Surprisingly, there are a few moments of self-deprecatory humour. The drumming is low key, probably so as to not detract from his guitar playing. Individually, most of these songs are pretty good.

Be the first to review “THE EVIL CELL: S/T [Self financed release. speed metal guitar player] £0 cd free for orders of £10” Cancel reply