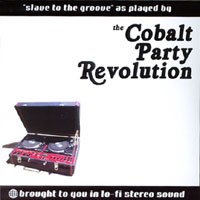 1 Hiphop Don’t Stop
2 Underneath Ladders
3 Whiteboy (just like me)
4 Nothin’ll do but the best
5 CPR Crew
6 Keep Your Receipt
7 Hit the Deck
8 Down with the Scratch
9 Axel F in the Key of G
10 Learning to Drive
11 Discowhore
12 Slave to the Groove
13 You might not like us
14 Bluesand Moonman
15 Who’d of guessed?
16 Revolution’s End
17 Listen (outro)
18 <message>
This is the Cobalt Party Revolution’s first independent release. It was recorded and released by the band in true DIY fashion. We strongly urge you to check out the bands latest album, OK Consumer, which features the latest renditions of “”Keep Your Receipt””, “”Hiphop Don’t Stop”” and “”Slave to the Groove””.

THE FOLLOWING REVIEW COMES COURTESY OF BRAD WILSON, as posted on INDIE MUSIC.COM.

Sometimes to go forward, you have to go back…to school. For The Cobalt Party Revolution, that meant old school in the form of professors Dr. Dre, Public Enemy and A Tribe called Quest.

Although this record and music is packaged in a homemade cover and a non-commercial printed disc, it is still very easy to listen to and captures the spirit of independence that was intended.

CPR are about hip hop rhythms and suburban viewpoints set in a young party atmosphere. This record is a clear voice for today’s radio audience, capturing what’s going on and translating it to very hooky, contagious, memorable songs. Some of the songs on this record have been used in major radio commericals and have set digital download records from a single server.

The song production is minimal with the focus of each track on the lyrics, and a loose casual feel that is fun all the way. The vocals are often sung with distortion on the microphone, but the words are still audible and produced correctly. The key seems to be the hooks. That’s all right, because the songwriting is very good.

There are a lot of songs on this album, mostly short danceable stories about having fun. The Cobalt Party Revolution’s moniker is right on, because on this great collection of tunes, they sound like they have fun and party. With the songs as good as they are, and these are great tunes, they could have used better sonic recording production. When CPR get in a major studio with a budget, they’re gonna produce hit after hit. These songs are too good just to toss out like a quick download. The record was recorded in Cash Till’s bedroom/studio.

Ok, I get the idea, low on dough, but this album of party favorites is still a blast to listen to. Songs such as “”Hiphop Don’t Stop,”” “”Underneath Ladders,”” “”Keep your Receipt,”” “”Slave to the Groove”” and “”Who’d Of Guessed”” are just brilliant party songs, ready to be blasted from your speakers.

The group of rappers do get serious, both lyrically and musically, at points throughout this album, especially on the knock-out and totally mature track, “”Revolutions End.”” I thought this song was outstanding in every way.

CPR sounds like a band that hangs out together. When you listen to this record, it’s like being along for the ride in Fair Haven, Michigan. These guys are honest in their approach to writing lyrics in that they are telling the listener what they see in their day to day lives. They take the time to switch it up from track to track, their rap has flow, and they have good subject matter in their lyrics. They tell a story.

Many heroes come from everyday people, stepping up when they are needed most. The Cobalt Revolution is just that, unlikely heros for tomorrow’s hit record makers, stepping up to the challenge by making a great record with songs that speak for their generation. Keep up the good work. This is an excellent record.