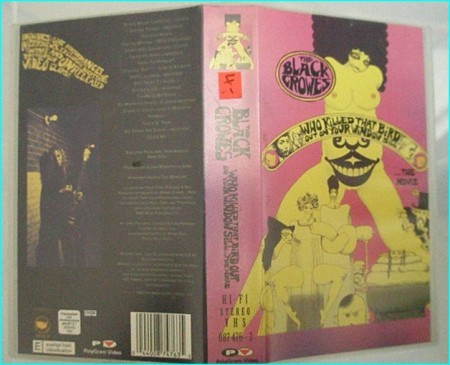 The Black Crowes: Who killed that bird out on your window VHS 1992. Classic rockumentary & 18 great songs

This vintage VHS Tape in Great Shape and Works Fine!! Cover Slipcase & video have no ware. Shipping Fast!!..Buy with Confidence!!

5.0 out of 5 stars Classic rockumentary,
This is definitely one of the greatest rock films ever made (of course, being a Black Crowes fan doesn’t hurt in the appreciation of it, either!)
Its a shame that more people didn’t see this film when first released, but nows the chance to do some required catching up if you’ve been out of the loop for the past fourteen years. This VHS captures the Robinson Brothers at the peak of their game, with some of the most classic “Chris’isms” (as fans affectionately call Chris Robinsons infamous rants) ever captured on film. An especial highlight: The Moscow concert sequence, which contains some of the most superb editing of a rock show I’ve ever seen. The bands energy is contagious and leaps off the screen! The film certainly turned THIS casual fan into a bona-fide Amorican fanatic (and no, thats not a spelling error…if you don’t know what an Amorican is, all the more reason why you NEED to see Who Killed That Bird Out On Your Windowsill).

If you’ve ever wondered what “the fuss” is all about and why the fans are so loyal to this band, check out this film and you’ll know why.

5.0 out of 5 stars Two words,KICK ASS!,
This video was released in 92′ following their tour that year for The Southern Harmony And Musical Companion album,and it is a must have for any Crowes fan. Unfortunately,its no longer in print, but for those of you that appreciate great music, where theres a will theres a way. Just get a copy somehow. Included are such video favorites as She Talks To Angels,Remedy, Thorn In My Pride,and Hard to Handle as well as never before seen clips of Jealous Guy(recorded in Atlanta),Stare It Cold(from Moscow),and You’re Wrong from MTV Unplugged. The tracks Jealous Guy and You’re Wrong have never been released in any other form,including the box set thats available now ,that includes the first 4 records and 10 more unreleased songs. The live performance footage is all top notch and the sound quality of the recordings are at a high level as well.It has been recorded in hi-fi vhs mode and Dolby nr was used as well to reduce tape hiss when you’re crankin ‘ it the way it should be played. There is also a good amount of back scene footage from video shoots and touring that lets you get a good feel for the band and life on the road. It even includes footage before the show in Omaha,which is where I caught them at on that tour. At 83 minutes,this video definitely gives you what you’re looking for as a Black Crowes fan,and its a good timeline piece to gauge how they’ve grown musically from then to now. If you’re a rock fan and by some strange occurrence don’t have any Black Crowes albums,go out and pickup Shake Your Moneymaker and go from there.You’ll thank yourself later,and for all you devoted Crowes fans keep lookin’ for Who Killed That Bird Out On Your Windowsill,its worth its weight in gold.

5.0 out of 5 stars Must have!,
As a Black Crowes fan, I don’t have much choice for buying videos. I do love this one. Plenty of behind the scenes stuff. And great music. Filmed at their peak.

5.0 out of 5 stars Must have,
Any Crowes fan must have a copy of this!! Kind of funny seeing the boys back in the day.

5.0 out of 5 stars totally awesome MUST have!,
I first bought this when I could only buy a used VHS. I bought it with my 42 birthday money., It was the best 48 dollars i had ever spent. If your a true crowes fan this is a must. This is their roots. Get this. You’ll be glad you did.

About five minutes into the Black Crowes’ first official home video, singer Chris Robinson lets the viewer in on a little “secret.” Waxing nostalgic about the bands newest oeuvre, The Southern Harmony and Musical Companion, Robinson admits, “This record is a mere image of how we live our lives. We don’t separate music from our lives, this is just how we live everyday.” And about three minutes later, as he comments on how the band deals with being on tour, he drives the point home. “Leon Russell once said that its like a hippie community bona fide.” Amen to that. And so it goes. Whether you like them or not, you have to give the Black Crowes props for spitting in the face of corporate rock and steadfastly believing in their own blind idealism. Not only does the band walk it like they talk it, over the years they have managed to succumb to most of the clichés that go hand in hand with the creative process and the perils often associated with it. By 1992 (the year this piece was released), in its two years as a recording unit, the band had already released two records, Shake Your Moneymaker and later what many have called their career-defining moment, the aforementioned The Southern Harmony and Musical Companion. After playing over 300 dates in support of their debut album, the quintet fired “liability” Jeff Cease (drug guitarist casualty numero uno) and replaced him with the stellar Marc Ford (later to become drug casualty numero dos). And so you come to this video. Who Killed that Bird on Your Window Sill is an often hilarious insight into the superficial inner-workings of this band — one that sees the brothers Robinson doing just about everything you’d expect from them: sneering at everyone, fighting with one another, at odds with radio programmers, but most importantly, creating some of the best American rock music of the early ’90s. The video also invites the casual viewer into the recording studio to catch the Crowes at work on their second record (recorded in a mere eight days). Various montages of tracks like “Black Moon Creeping” and “Sometimes Salvation” are raw and unedited. Theres, of course, a bunch of the obligatory backstage mucky-muck-type footage that you’d expect from such a release, but for the most part, the big winner here is the music itself. A couple of interesting moments come to mind. First theres the bands version of “You’re Wrong” (a primitive, early version of “Sting Me”) and a joyous romp through “Jealous Guy” filmed in Atlanta featuring the legendary Chuck Leavell on keys. Yet still, there are other bone-chilling moments as is the case with a smoldering, quasi-religious rendition of “Stare It Cold” (one of the few live moments on this tape to feature Jeff Cease live in Moscow). As the band plays to about 300-500,000 Russians (depending on who you ask), the producers mix in footage of the bands ferocious reading of “Stare It Cold” with violent snippets of young men and women being beaten to a pulp by the Russian army (in comparison, some of this drama makes Altamont look like Disneyland). It was later revealed that the festival boasted some 15-plus deaths and about 200 rapes. Lastly, this video features a hodgepodge of “official” band clips from their first two records including “Hard to Handle,” “She Talks to Angels,” “Jealous Again,” and “Thorn in My Pride.” A few things here and there are kind of pointless like footage from the Atlanta pot festival which sees the band playing “Sting Me” in front of a huge festival audience; unfortunately, the track itself is “stripped” on (read: its a play back from the album version). A worthy document for any self-respecting Black Crowes fan. One can only hope for perhaps a second and/or third volume one day.

The Black Crowes are an American, blues-oriented hard rock jam band that has sold over 20 million albums. They were hailed by Melody Maker as “”The Most Rock ‘n’ Roll Rock ‘n’ Roll Band in the World””. In 1990, the readers of Rolling Stone named it the ‘Best New American Band’. The band has toured with acts such as Aerosmith, Jimmy Page, Robert Plant, The Rolling Stones, Bob Dylan, The Who, AC/DC, The Grateful Dead, and Neil Young. The Crowes – as fans refer to them – are listed at #92 on VH1 “”100 Greatest Artists of Hard Rock””.

Watch The Black Crowes deliver a pitch-perfect performance of “She Talks to Angels” nearly 30 years after its release and see them play their debut album “Shake Your Money Maker” from start to finish on tour next year.

Posted by The Howard Stern Show on Tuesday, 12 November 2019

Watch The Black Crowes deliver a pitch-perfect performance of “She Talks to Angels” nearly 30 years after its release and see them play their debut album “Shake Your Money Maker” from start to finish on tour 2020.

Be the first to review “The Black Crowes: Who killed that bird out on your window VHS 1992. Classic rockumentary & 18 great songs” Cancel reply 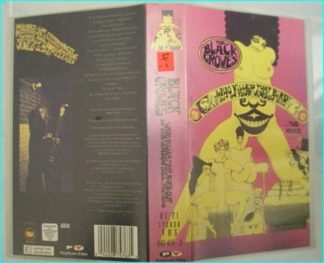 You're viewing: The Black Crowes: Who killed that bird out on your window VHS 1992. Classic rockumentary & 18 great songs € 10.54
Add to basket