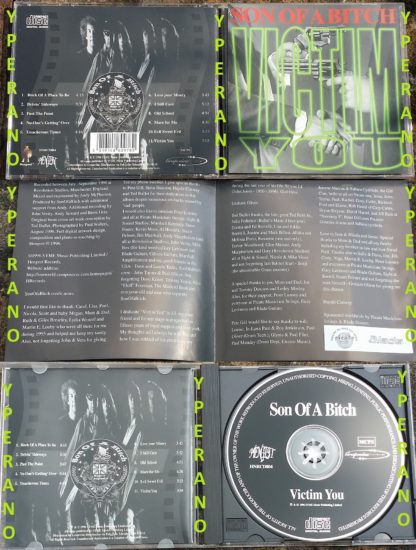 In 1994, Graham Oliver and Steve Dawson, founding members of Saxon (“Oliver/Dawson Saxon”), reunited under the name “Son Of A Bitch” (which had been Saxons own name originally, before they became well known) and released Victim You. Additional recruits to the band were former SAXON and MOTÖRHEAD drummer Pete Gill and American front-man Ted Bullet, previously with THUNDERHEAD. Victim You is like two CDs in one. The band sounds very much like Saxon on a few songs, and then have a sound more reminiscent of late 80s metal.

three of the original founding members of the British heavy metal band Saxon, Graham Oliver, Steve Dawson and Pete Gill, after their departure from Saxon.

Recorded between July-Setember 1996 at Revolution Studios.
Produced by SonOfaBitch with additional support from Andy Maepherson

Son of a Bitch rock hard, as you’d expect from a band containing a member of heavy metal legends Saxon. VICTIM YOU is their 1996 album, containing 15 songs. Guitarist Graham Oliver wasted little time getting back to work following his rather unhappy departure from New Wave of British Heavy Metal legends Saxon. After reuniting with other disgruntled former members Steve Dawson and Paul Quinn to form Son of a Bitch (ironically, the name of their first band back in the mid-’70s), the group released their first album, Victim You, in 1996. As one would expect, the two bands bear more than a few similarities. But Son of a Bitch generally avoids Saxons more traditional metal approach in favor of a gritty hard rock sound, made more distinctive by the gruff, Southern rock-type vocals of singer Ted Bullet — quite similar to Blackfoot’s Rick Medlocke. And though he occasionally commits severe lyrical transgressions like the double — no, more like quadruple-entendre of the absurd “Driving Sideways” — the frontman usually manages to hold his own among such seasoned veterans. Edgy rockers like “Bitch of a Place to Be” and “Treacherous Times” religiously obey the time-honored laws of classic rock through their excellent combination of melody and power; while top-notch headbangers like “Past the Point” (very reminiscent of Dios “Don’t Talk to Strangers” and “Old School” feature nods to more contemporary ’90s stars. Ultimately, Victim You packs few surprises, but its overall high quality material is definitely one of them.

OTHERWISE KNOWN AS OLIVER DAWSON SAXON..
This is the brand new edition of the Nineties SoB album by three former members of Saxon. The name harks back to the original band that existed before Saxon was formed.
The album is classic NWoBHM – great songs, tremendous vocals from Thunderheads Ted Bullet and loads of squealing guitar for good measure.
Is this where Saxon would have gone had Messrs Oliver, Dawson and Gill stayed on board? Maybe…
It is perfectly crafted and gives Byfords current band a run for its money.

5.0 out of 5 stars not only succeeded, but terrific! ,
This album is in my opinion the best of its kind, has long been and remains unique today! is also shameful that hardly anyone knows the disk. For me, high up in the list of favorite albums of all time!

5.0 out of 5 stars succeeded! ,
“Victim You” is the title of the album 1996’er of “Son of a Bitch”. And even if the name of the British band after 15 years still sounds just as silly as founding band, this album certainly deserves attention. The sound of the “Victim You” is almost typical of a band of the NWOBHM (New Wave Of British Heavy Metal). “Son of a Bitch” apparently can not or will not deny their musical heritage. I can only welcome it anyway. And I especially liked the “Victim You” songs like “Bitch Of A Place To Be,” “The Past Time Point,” “Old School” or the ballad “I Still Care.” But the rest of the eleven tracks are definitely worth listening to. My conclusion is: Absolutely recommended.

5.0 out of 5 stars great hard rock from 1996
the 1996 son of a bitch album which featured graham Oliver, Steve Dawson and Pete Gil all former Saxon members, also ted  Bullet from thunderhead did the vocals on this and Hayden Conway was on board already, i was stoked back in 96 when this was coming out when i saw a press release, as i’m a huge Saxon fan since 1981 i thought it was fantastic to have 3 key original members together doing this, this album victim you featured some great heavy rock songs like past the point, bitch of a place to be, old school, i still care and for the most part was a very good HARD ROCK / HEAVY METAL record especially since the mid 90s REAL metal was so dead. This was a real treat back then. This was a straight on 80s sounding album and i still feel bad this band did not continue in this form NOT THE OD SAXON FORM!!!! Son of a bitch was the direction they should have kept going in. I must say this album is much better than the Saxon cds. If you want to check out Graham’s post Saxon wailing THIS IS THE CD TO GET. To sum it up, this is really a great record and if you liked strong arm/denim and leather or power and the glory era Saxon then i think you will really like victim you, this CD is ALMOST as good as early to mid 80s Saxon was. as with all killer old-school rock PLAY THIS LOUD!!!!!! 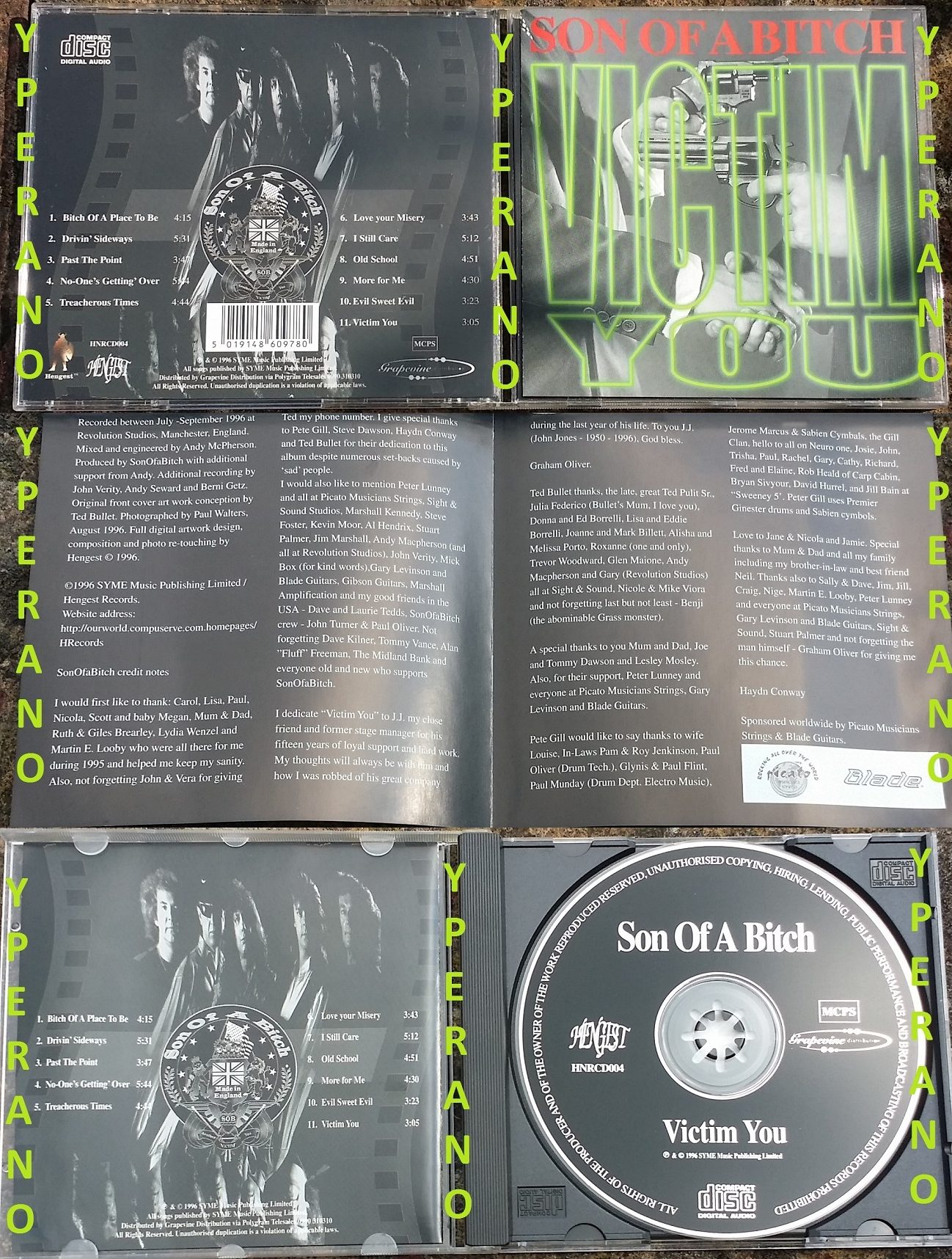