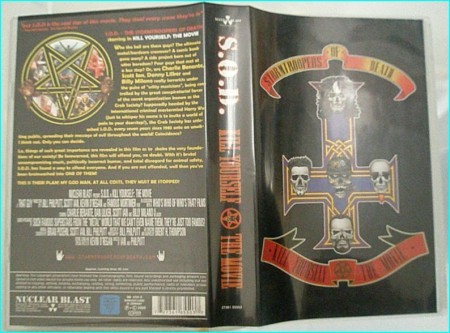 New Yorks masters of mayhem are back with their most ridiculous trick ever! This VHS video captures the highlights of the past year of insanity including live footage, behind the scenes footage, and all around “kick your ass” S.O.D. attitude. S.O.D. is composed of members of Anthrax, Brutal Truth, and M.O.D.
This movie is definitely a must have for any S.O.D fan.

5.0 out of 5 stars They should be up for a Grammy
If I had a voice like Billy Milanos, I would sound just like him. This VHS is a must have for any music lover. If your child likes Nsync or the Backstreet Boys, they will love you forever if you get them this. All of the classic S.O.D. songs are here. There are the classic peace songs such as “F the Middle East” and “Speak English or Die.” The sympathetic love song “Kill Yourself.” There is even the USA for Africa left over song “Aren’t you Hungry?” How that song never ended up on that album is beyond me. And of course, there are the Ballads. You cannot say Monster Ballad without mentioning S.O.D. They are all here: Ballad of Jimi Hendrix, Kurt Cobain (Nirvana), Frank Sinatra, INXS, and even Walter Payton. There is even a secret code to unlock a one hour concert video filmed on their Bigger than the Devil tour…

5.0 out of 5 stars You’re Fired!
This is a must have for any S.O.D fan. In addition to their blistering live show, the backstage goings-on are included: featuring a wasabi eating contest, Milano making fun of Lilker, Scott Ian making fun of Norweigan death metal, Karoke Mercyful Fate, an appearance of Just Shoot Mes ‘Kevin’, and Milanos constant utterings of ‘You’re Fired!’ Get this

5.0 out of 5 stars You’ll laugh so hard, your sides will ache…
This features a live S.O.D. show inter-cut with tons and tons of backstage/interview/candid footage. I love S.O.D.s music and the live concert stuff was great; but the real reason to buy this video is for the hilarious behind-the-scenes stuff. Every time I’ve watched the video I’ve had a big, goofy smile plastered on my face the entire time. The commentary track is laugh-out-loud funny too. Sgt.D says “buy this now!” (and make sure you pay attention to the FBI warning).

was shot during the S.O.D. promotional tour for Bigger Than The Devil in Japan and America, interspersed with footage from various events, such as some 1999 shots from the Dynamo Open Air in the Netherlands. Also appearing: Dimebag Darrell (of Pantera fame), Paul Baloff (of Exodus fame) and Kerry King (of Slayer fame).

The cover parodies that of the Guns N’ Roses album Appetite for Destruction. 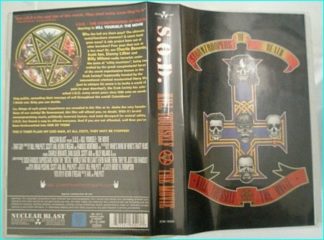