The cleverly titled Sky 2 opened in 1980 with the burbling beat of “Hotta,” relieved by the alternate electric and acoustic lines by the guitarists. It also includes the single “Toccata,” Sky’s reworking of Bach’s “Toccata and Fugue in D Minor.” While history doesn’t tell us how high in the charts Bach’s original made it, Sky’s version rose to a somewhat astonishing No. 5 on Britain’s national pop charts. The album also included Sky’s version of “Vivaldi,” originally penned by Monkman for Curved Air.

5.0 out of 5 stars The Original & Best Classical/Rock Fusion Band,
At a time in the 1970s when punk and post-punk bands were busy deconstructing music England-based Aussie classical guitarist John Williams created what he called a ‘musical home’ for himself and several other top session musicians he had worked with on some of his more experimental albums. SKY consisted of Williams and Kevin Peek on guitars, composer & keyboardist Francis Monkman, bassist and tuba player Herbie Flowers and top session percussionist Tristan Fry. They were all classically trained as this musically complex and technically accomplished 2nd album demonstrates. ‘Hotta’ showcases each band members individual talent with a series of instrumental solos based around a Spanish Jota rhythm (created by taping the ‘rock’ and ‘rhumba’ buttons down on a drum machine). The delicate ‘Dance of the Little Fairies’ revels in its 5/4 time signature. ‘FIFO’ is a four part conceptual piece written by Monkman and is full of complex miniature classical guitar motifs intertwined with long keyboard runs backed by a rock solid rhythm section playing in a variety of off-beat time signatures. Some elements on the album are unadorned classical recitations (Monkman’s ‘Gavotte & Variations’; Williams & Peeks ‘Andante’ and ‘Ballet-Volta’) while others are showcases for individual talents (Frys ‘Tristans Magic Garden’; Flowers ‘Tuba Smarties’ – the only ‘live’ track on the album). ‘Toccata in Dm’ was a UK No6 in the summer of 1980 and the bands only hit single, although it should be remembered that in Britain in the early 80s this albums music was used again and again on everything from local news programmes to documentaries. ‘Vivaldi’ was a re-working of CURVED AIRs old instrumental for whom Monkman played keyboards. Rarely have classical musicians of this calibre conspired to produce serious’ music with a rock feel and gotten away with it. Years later band members left one by one and the formula stopped working but SKY2 remains a testament to fine musicianship – whatever your own musical preferences are. 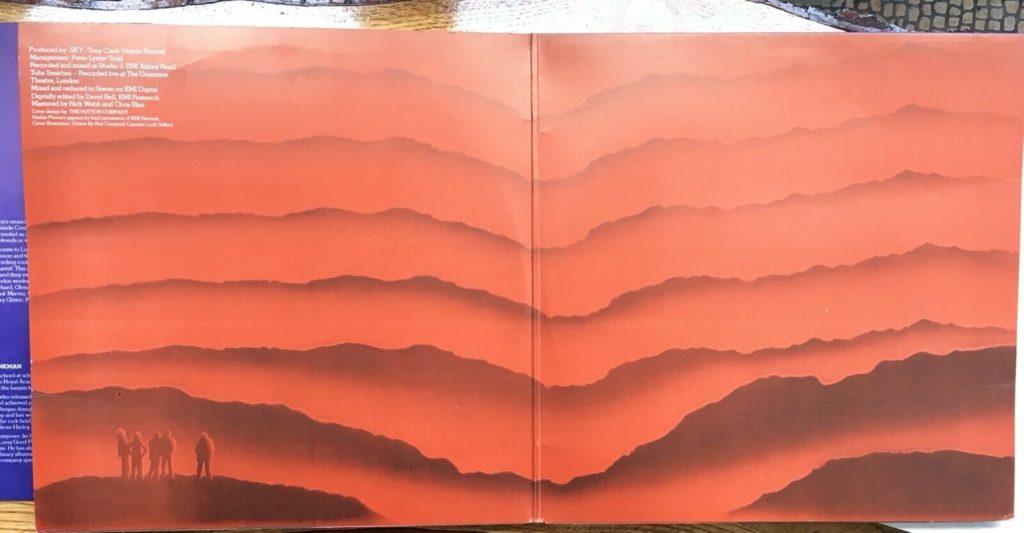 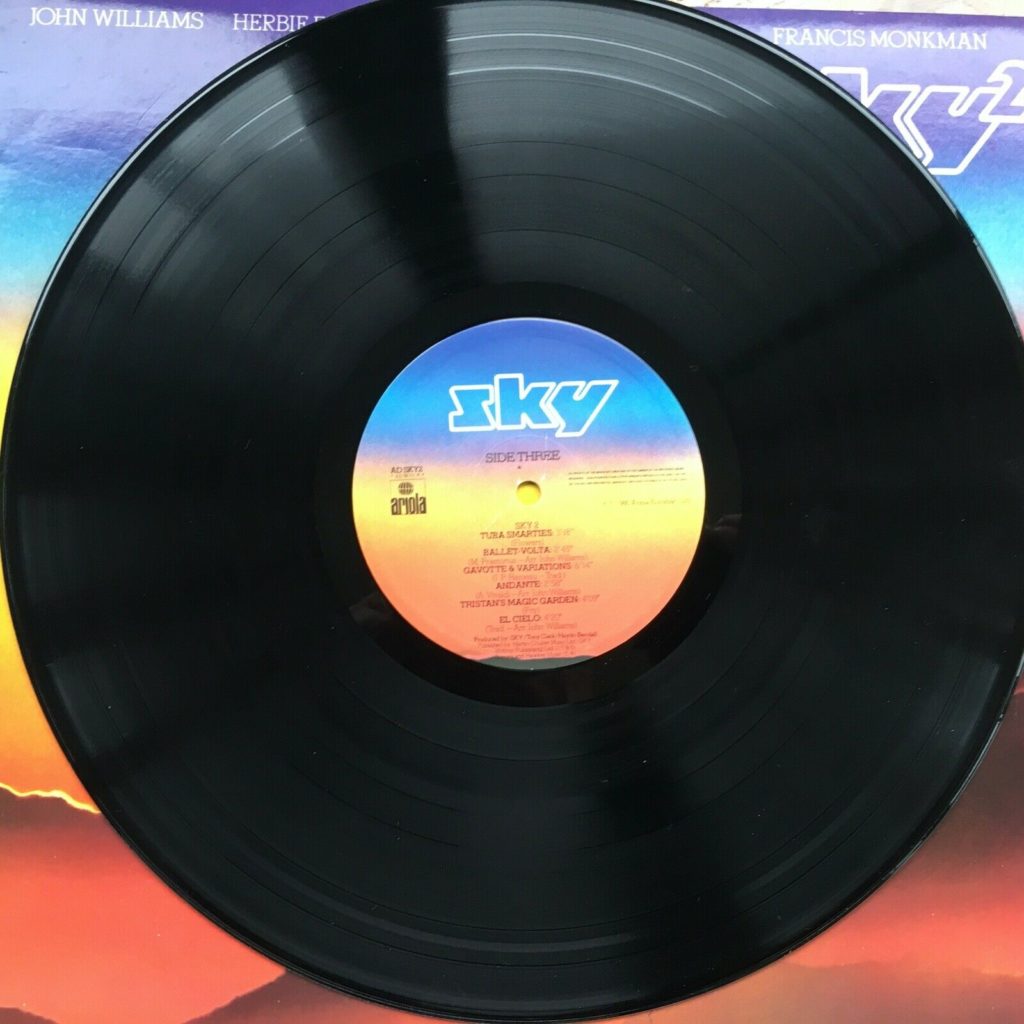 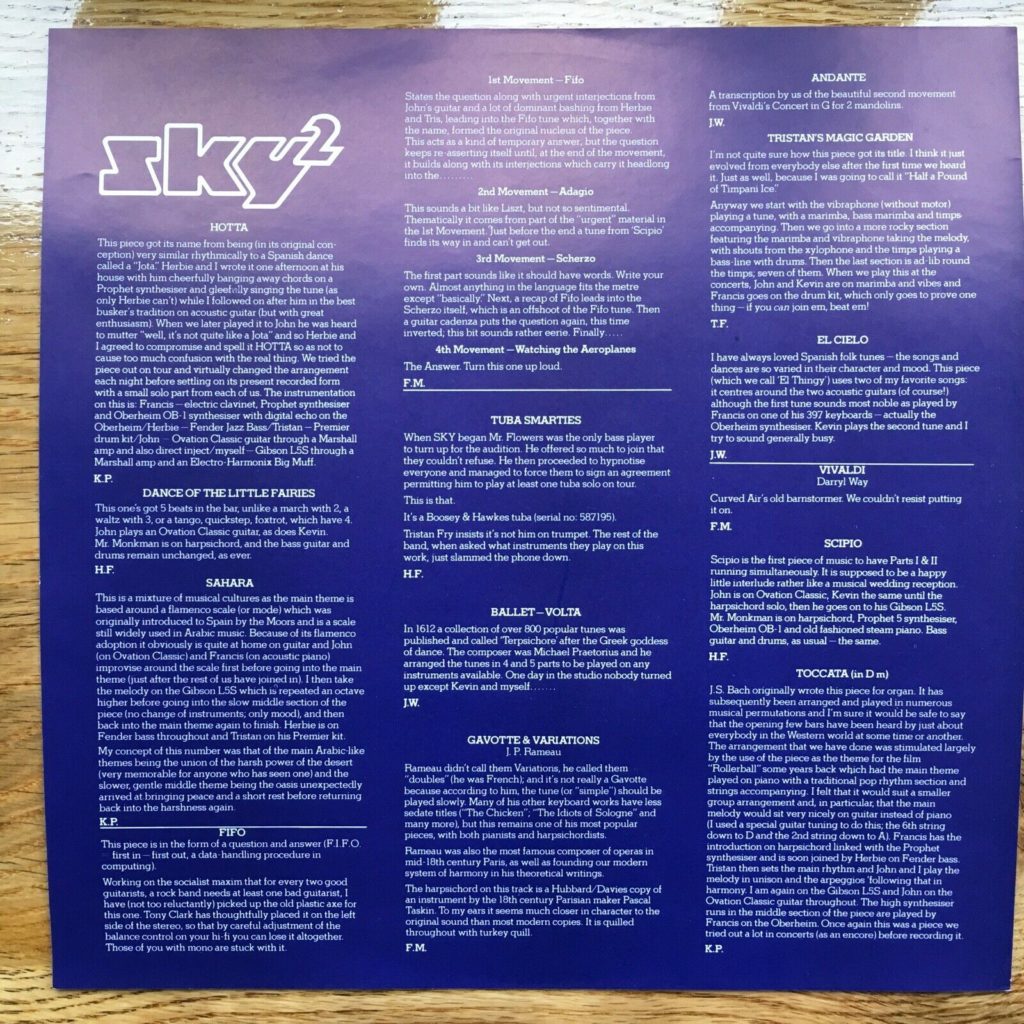 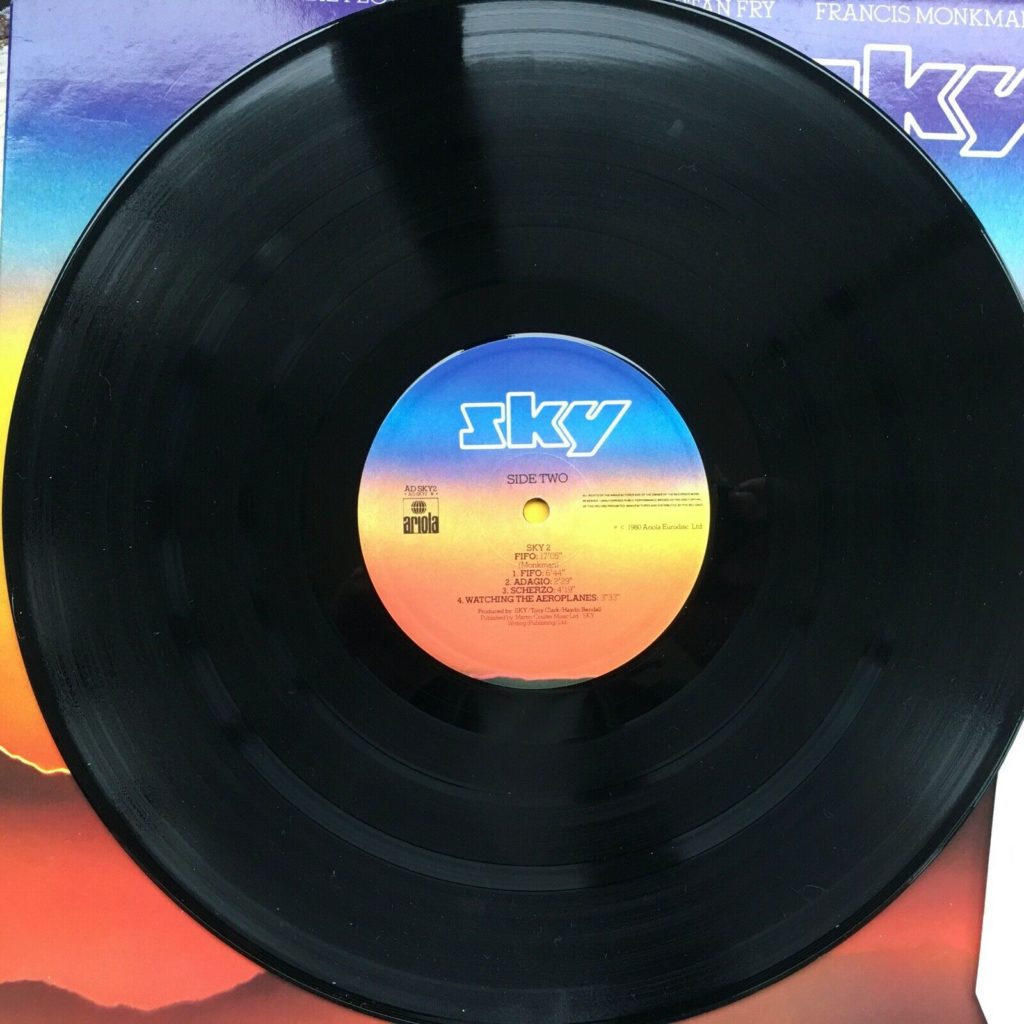 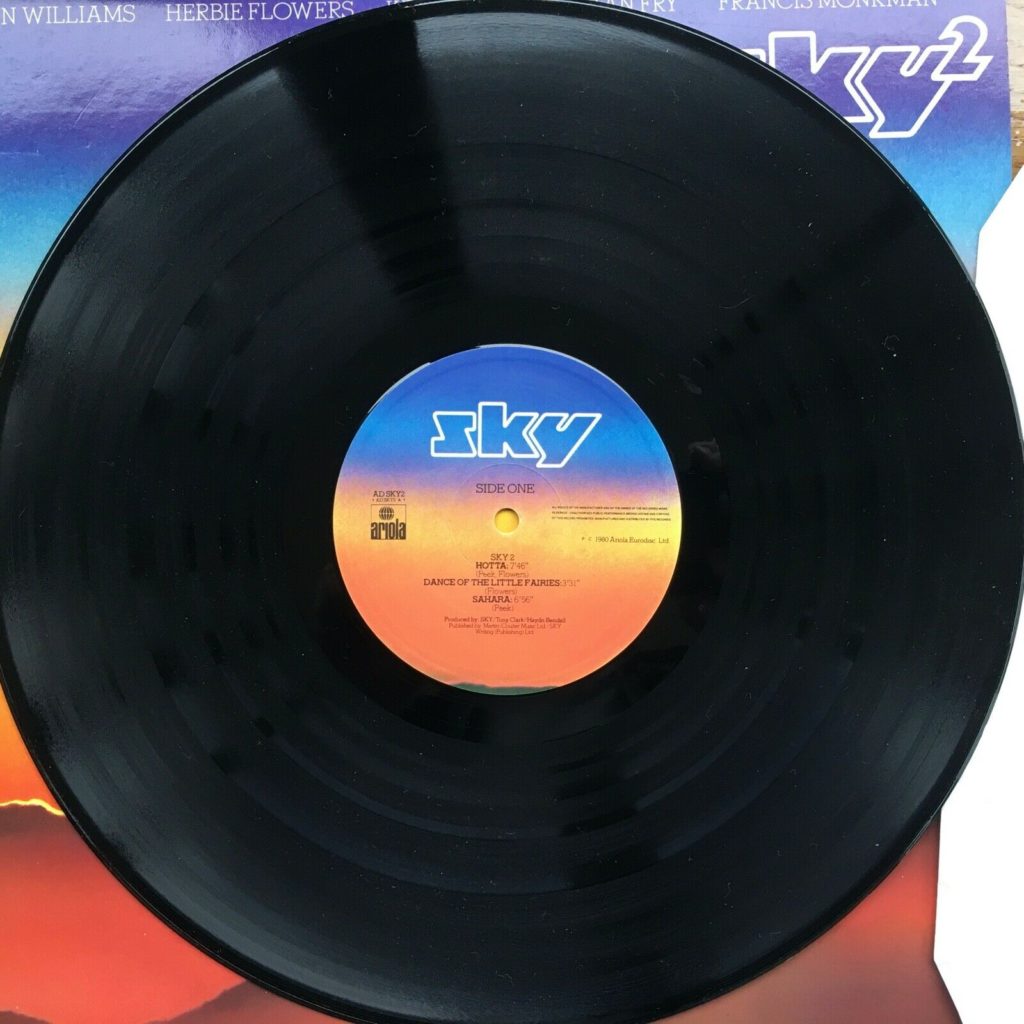 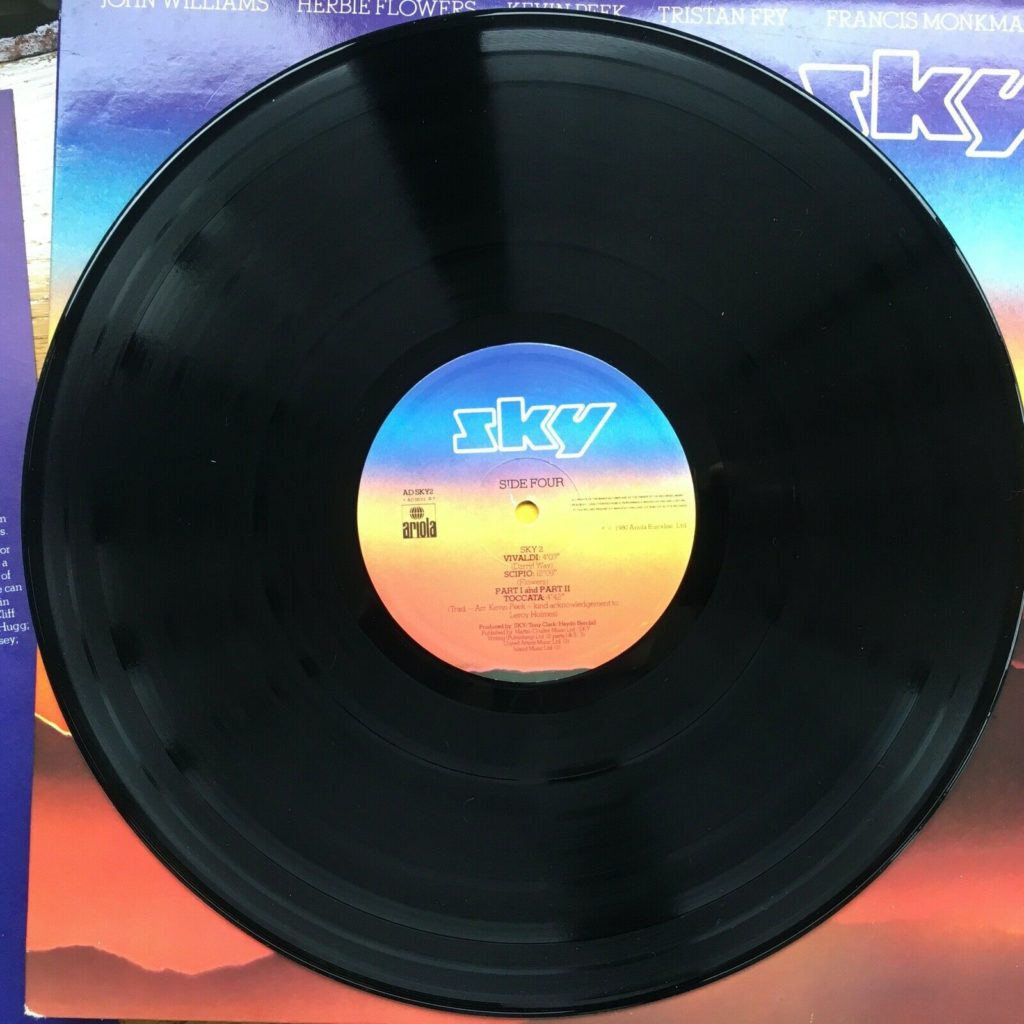 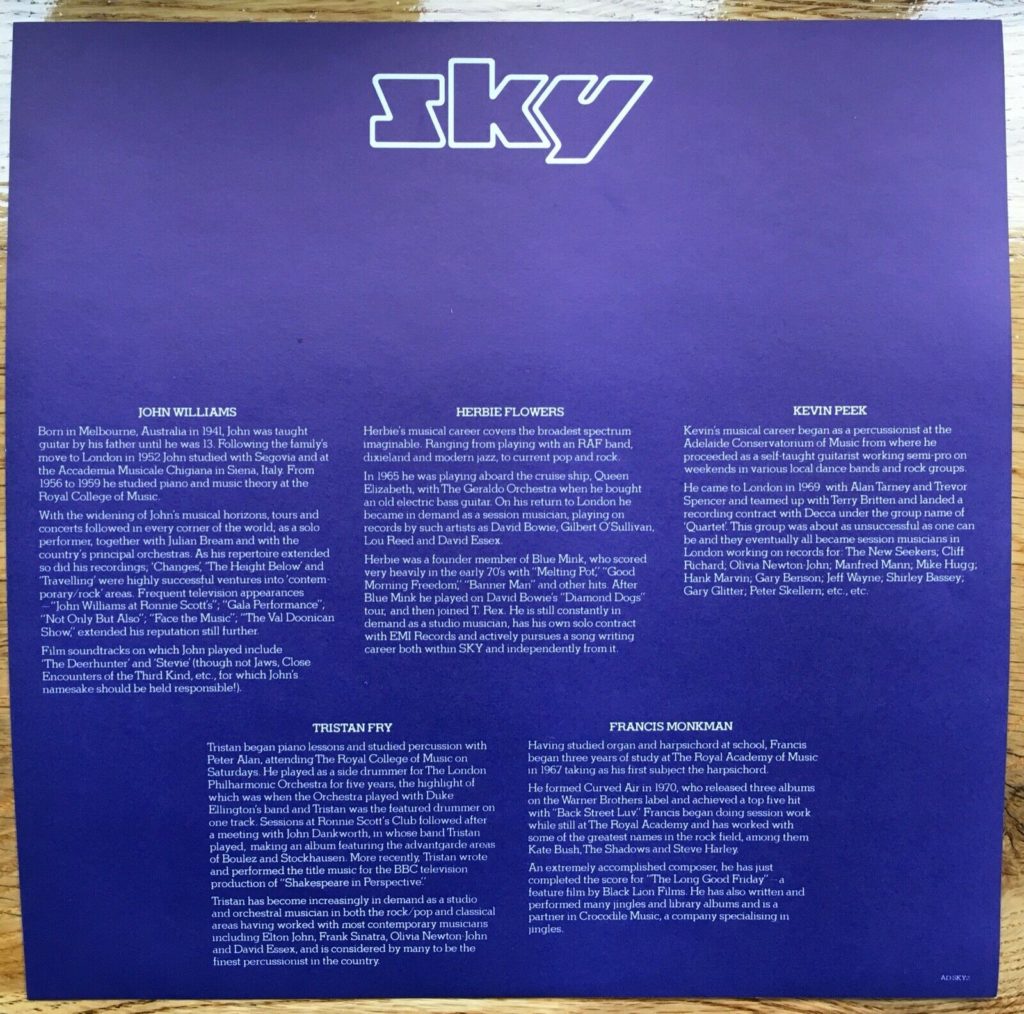 5.0 out of 5 stars Still wonderful,
I got the double album version on vinyl when it was first released and loved t. I played it and played it but unfortunately loaned it out and never got it back!
Ok so Sky are a group from the past, but who cares? The musicians are some of the best in the world, in fact as I write this John Williams is playing in the last night of the proms and he is still the master of the guitar.
This album in my mind contains some of the best musical classic/rock/whatever there is. From their more well known tracks such as Toccata to less known ones such as FIFO (first in first out) to Watching the Airplanes.
Take my advice, if you only get one Sky Album, make it Sky Volume 2, sit back, relax and turn up the volume…

5.0 out of 5 stars Still Love It,
Sky 2 was my joint favourite of their discography, (along with Five Live), because the other albums had compositions which simply could not match Hotta, Sahara, Watching The Aeroplanes, El Cielo, Vivaldi, and Toccata.

If you only try one Sky studio album make it this one and capture some instrumental rock history.