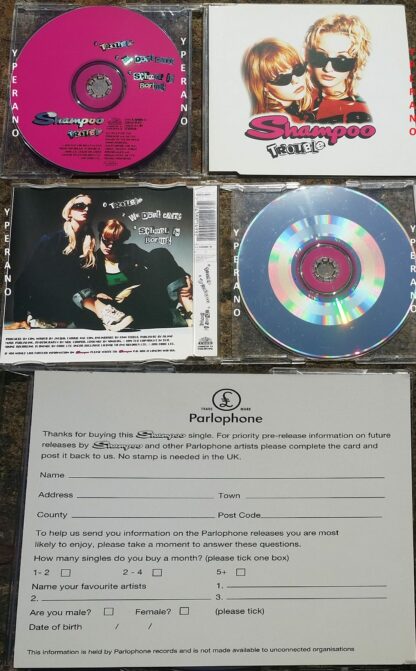 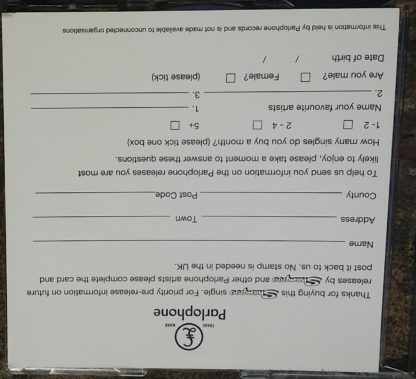 Marketed by Parlophone.
Made in UK.
Manufactured and distributed by EMI.
Printed in UK.

“Trouble” is the first single from Shampoo‘s 1994 debut album We Are Shampoo. The song was the band’s most successful single, reaching No. 11 in the UK and making the top 20 in Australia, Belgium and the Netherlands, while also proving popular in Canada and Japan. Attempting to break into the US market, the song was released as a promotional single for the 1995 film Mighty Morphin Power Rangers: The Movie, in anticipation of the release of the US version of We Are Shampoo. A new music video was recorded featuring clips from the Power Rangers film.

The original music video features the girls trying to get home from central London after a night out, as their lyrics describe. The re-make music video to promote Mighty Morphin Power Rangers: The Movie features new footage of the girls singing to the camera, intercut with footage from the film.

The US promotional campaign for Shampoo, which centred on the single “Trouble”, was described by Billboard as a massive effort. In addition to releasing the song as a promotion single for the Power Rangers film, 15,000 promotional cassettes of “Trouble” were given away at Wet Seal stores, as were coupons for the full album, and a video-reel containing music videos for “Trouble” and Shampoo’s other singles, “Delicious” and “Viva La Megababes” was made, with the hopes of finding in-store play at over 200 music retail outlets.

Tom Demalon from AllMusic said that within seconds of hearing the track “most listeners will either be gleefully giggling along with the girls or scrambling for the stop button. While reviewing the Jawbreaker soundtrack, Doug Stone from Allmusic spoke favourably of the track, and Jonathan Bernstein from Spin described it as Shampoo’s version of “No Sleep till Brooklyn“, stating the song catapulted them to success, particularly in Japan. Billboard stated the song was just as goofy as the Power Rangers film it was supporting, and that it would probably only be of interest to children and top 40 radio as a novelty.

Zebrahead covered the song on their 2009 album Panty Raid. Lyrics from the song are referenced in the 2014 single “Double Bubble Trouble” by M.I.A. 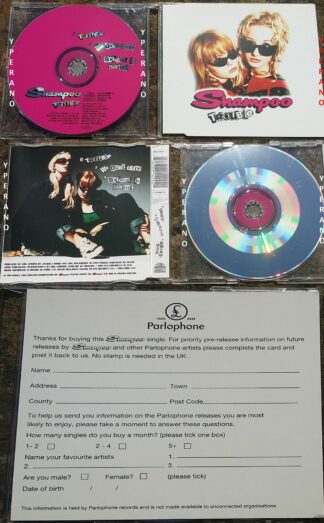