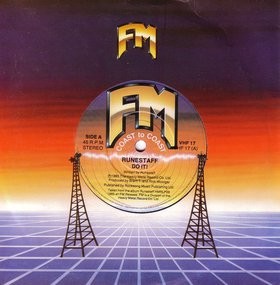 RUNESTAFF began life in Ipswich in 1980 as an all male quintet in the Tolkien inspired Prog Rock mould, later adding Joanne Sym as vocalist.
The band spent the next couple of years building up a strong live following with constant gigging and the odd decent support slot, gradually adding a Harder edge to their Proggy sound.
They released a demo in 1982 + a single and a self-titled album in 1985.

The record label sadly decided to have their weakest & most polite song as a lead single. Other songs are rockier.

and not such a great video clip as well, but hey….

Both videos have a very average VHS tape sound. Actual vinyl is much better.

Be the first to review “RUNESTAFF: Do it – Runestaff 7″. NWOBHM 1985. Female Fronted. Check videos and TV live.” Cancel reply