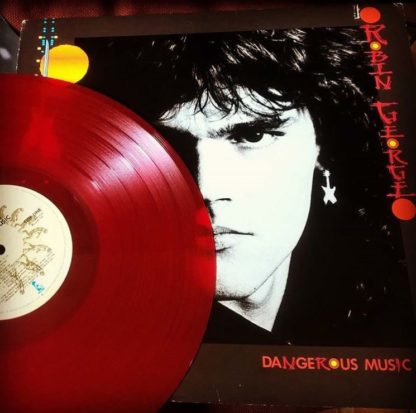 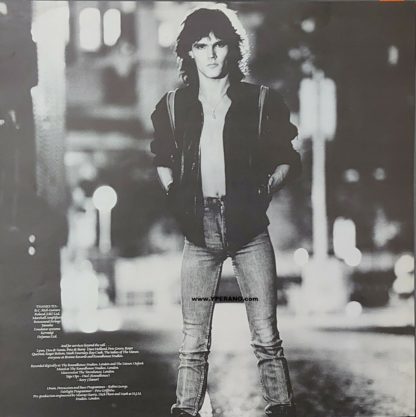 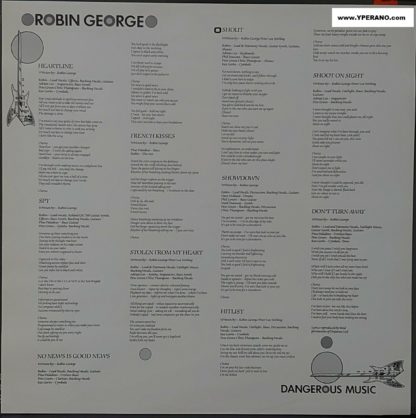 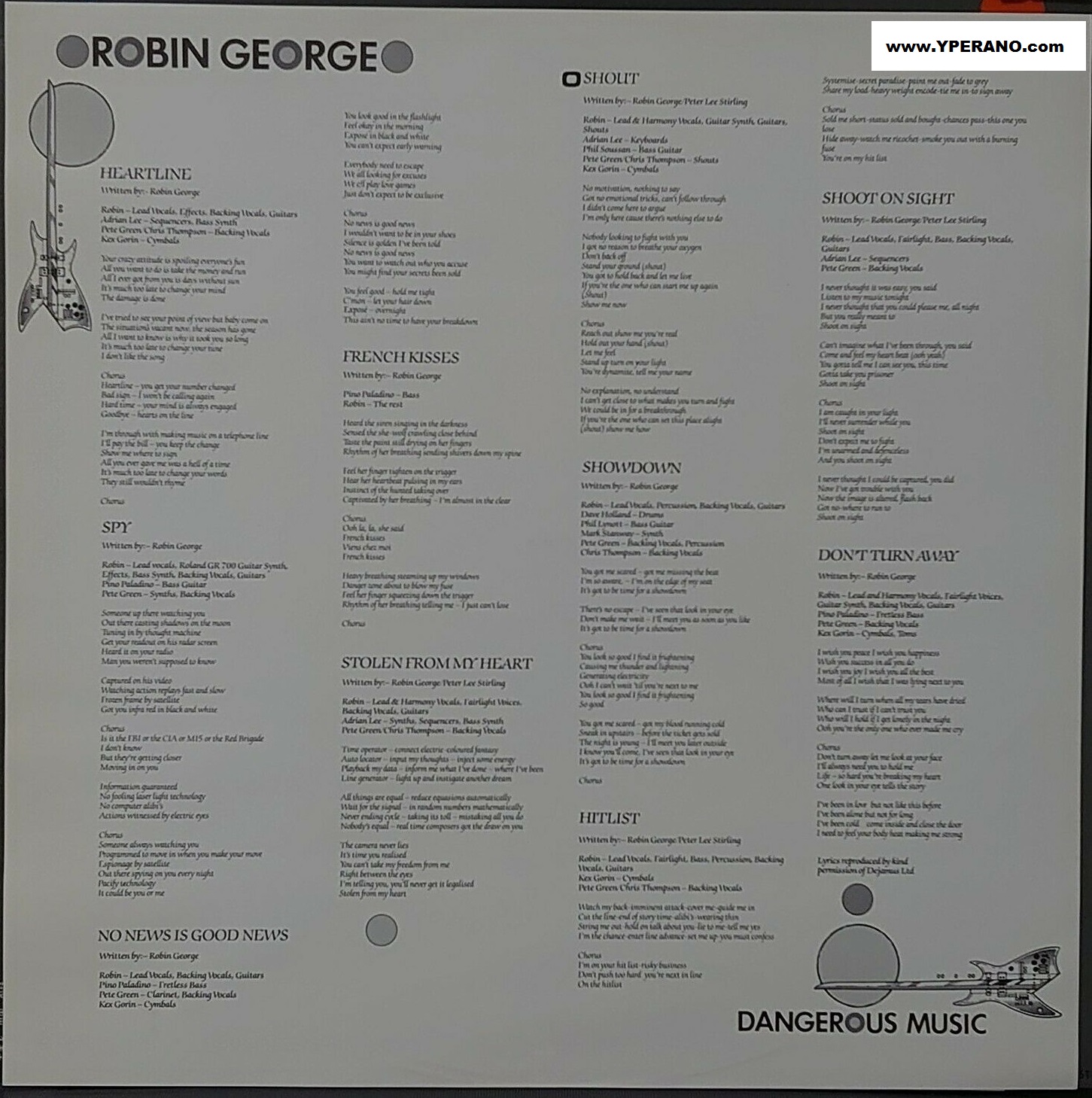 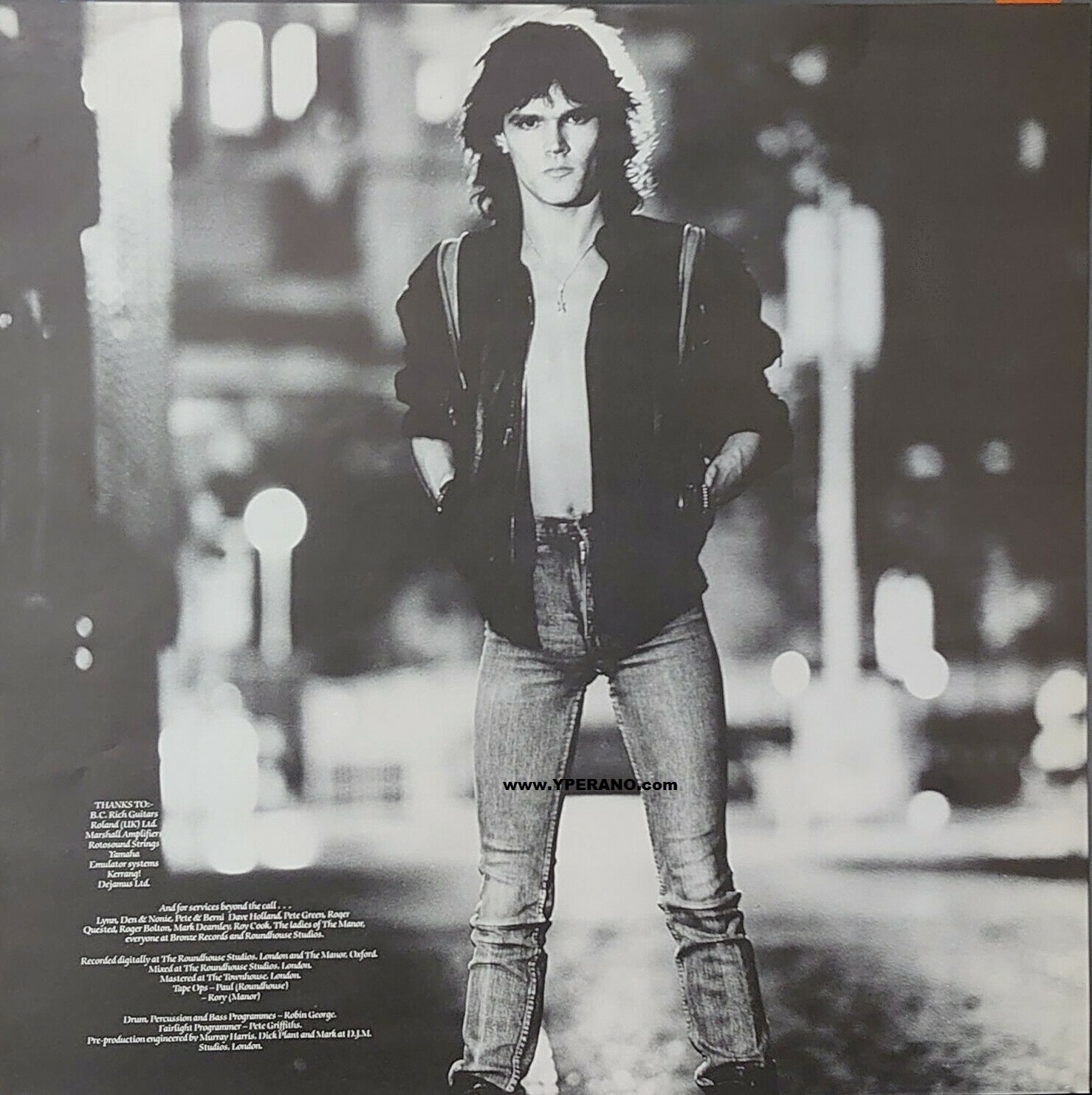 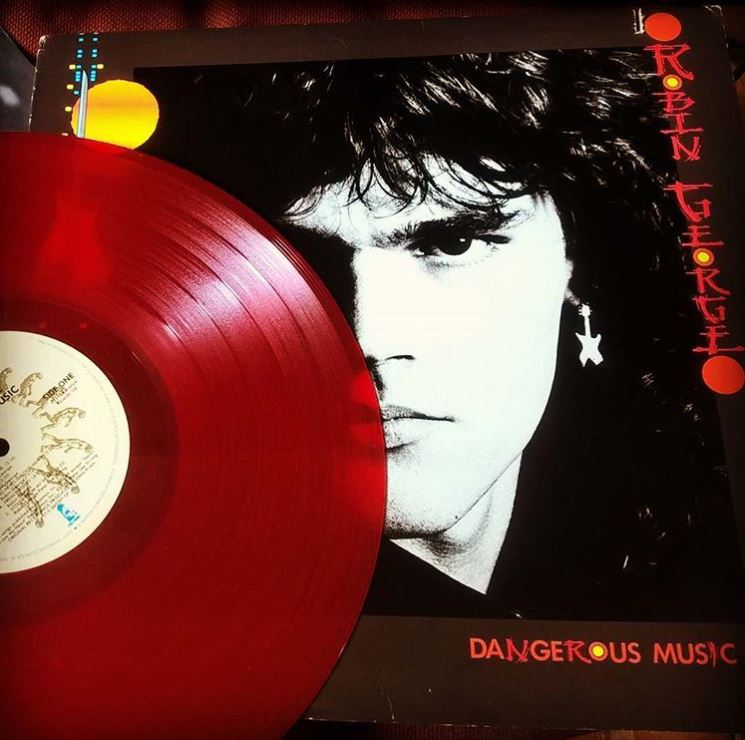 SAMPLES:
www.allmusic.com/album/dangerous-music-mw0000661672
OR
www.amazon.co.uk/dp/B00AV0X9NE/ref=dm_cd_album_lnk
10 track album
label: Bronze Records 1985
extras, comments: RED VINYL w. lyric insert
on visual inspection red vinyl looks mint or near mint
———————————————————————————————–
5.0 out of 5 stars First rate 80’s Pop Rock,
Having owned this album on vinyl since 1985. Its one that i pull out frequently to return to my teenage years. There are some stunning tracks on the album. Such as Don’t Turn Away & the semi hit Heartline. The album also featured Phil Lynott playing bass on a couple of tracks. Indeed Robin George returned the favour by playing guitar on his ’19’ single. Its an easy to listen to album, nicely up-tempo, by a very talented musician (he plays just about every instrument) who never got the break he deserved.
———————————————————————————————–
5.0 out of 5 stars EIGHTIES POWER POP
‘Dangerous Music’ is ‘a grower’ – I wasn’t sure about it upon first listen, but subsequent plays have convinced me that this is a cracking good album. Robins vocal and guitar style is unmistakable and whilst the production and sound is locked firmly in the Eighties, the punchy tracks and sharp songwriting make this a highly pleasurable listening experience.
———————————————————————————————–
5.0 out of 5 stars Old but good
Had this on tape many years ago – been searching for it for ages. Great quality great songs. American rock at its best
———————————————————————————————–
This is still a pretty cool album. Of course, it doesn’t hurt that Mr. George was good looking either. Killer hooks, melodic rockers and great slower tempo songs as well. The guitar work at some points is quite admirable.
The cover art, song titles, & picture of Mr. George don’t do this album justice. There is a level of sophistication here which one would not expect from looking at the album for the first time. For instance, the lyrics are bang-on brilliant while still being light-hearted & unpretentious. It would be easy to imagine the opposite from a pretty boy. The production sounds like something done 20 years later.For me, I would rate this as the best heavy album of 1985- better than Iron Maiden, Sisters of Mercy, the Cult, or Accept.
This is one over looked gem of an album from the 80s. If you like hard rock but not heavy metal, this is your album. From the song Heartline all the way to the last track there are no throw away tracks. The best description for this album is pop metal. It rates up there with the best from Boston, Night Ranger, Cheap Trick, Autograph and Def Leppard. This is just one of the rockiest albums you can buy. I must also say this is a great album to put in the car stero and cruise with. Super stand out cuts on this album are, Hitlist, Shout, French Kisses, Shoot On Sight and of course Heartline. Enjoy!
Just as his 1985 milestone release Dangerous Music a record that, in its scope and technical approach, pre-empted much of what was to follow in the latter half of the 80s was about to take off in major fashion, his label Bronze went bust!
———————————————————————————————–
For fifteen years ‘Dangerous Music’ remained Robin Georges last recording. That’s without counting his appearances as a guitarist or backing vocalist on albums of Phil Lynott (Thin Lizzy), Glenn Hughes (Black Sabbath, Deep Purple,…), Marshall Law (Heavy Metal band), The David Byron Band (Uriah Heep), Robert Plant (Led Zeppelin), Magnum and Asia, to name but a few. Throughout his career he was also a producer for many other bands whose names will ring a bell to fans of vintage Hard Rock and Heavy Metal (Quartz, Witchfinder General, Wrathchild, Diamond Head, Waysted,…). I guess this proves that he was (is) well known and respected among fellow musicians but ignored by Rock critics and unknown by Rock fans.

‘Dangerous Music’ is an excellent 80s radio Rock album. In fact its one of the best slabs of vinyl I have ever heard in its genre. Quite an accomplishment if you know that I’ve heard hundreds of albums like it, but that only a handful of those reach the same level of song writing and musical performance. That last part won’t come as a surprise if you know that Dave Holland (Judas Priest) and Phil Lynott (Thin Lizzy) were among the recording musicians on this album.

So what happened? Why wasn’t this record the start of a stellar career? Why didn’t he become the giant that kicks Bon Jovi’s ass? …His record label went bust just after the release of ‘Dangerous Music’.

If you’re into slick FM Rock, AOR and Melodic Hard Rock then ‘Dangerous Music’ could be a hidden gem to you and certainly a more than worthy addition to your collection. It has the same pop sensitivity as the best material ever released by Aldo Nova (the artist to which Robin George probably bears the strongest resemblance), Billy Squier, Kim Mitchell, and Billy Thorpe or (if those names didn’t mean a thing to you) a higher quality version of early Bon Jovi or latter day Foreigner. Although the album as a whole is consistently strong, the standout tracks are the friendly semi ballad spy’, stolen from my Heart’ (with its surprising oriental melody) and the strong mid tempo rocker ‘Heartline’.

There were indeed more bands around that sounded vaguely like Robin George, but whereas many (if not most) of those slick FM Rockers and Hair “Metal” bands got no further than penning cliché ridden nothings, Robin George took the same building blocks and made something new and exciting out of it, something worthy of respect. The fact that he did this without coming across as arty or overdone, makes it even more impressive. In fact, the album sounds very radio-friendly and proves that mainstream music can be at a high level if its written by someone whos concerned by the added value of what he creates.

Contemporary Rock fans will probably wonder what I’m going on about. By 21st century standards ‘Dangerous Music’ of course sounds a bit dated. Its very sweet, extremely slick and in fact not “Dangerous” at all. The only real difference with similar Hard Rock bands of the era lies in the simple fact that your average Robin George song has better hooks, stronger melodies and more memorable choruses and that Robin George had a way of making his music sound fresh.

Check his full discography in www.robingeorge.co.uk/discography.htm , but in case you are not bothered, here are some of the artists he worked with and some of his work: 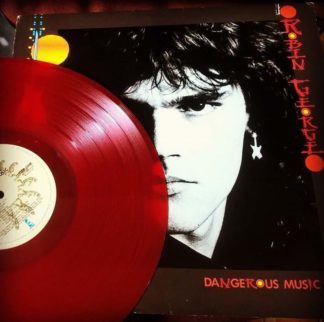