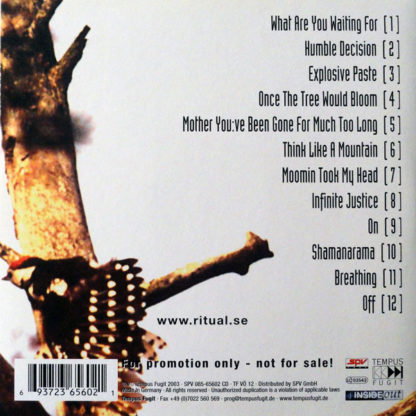 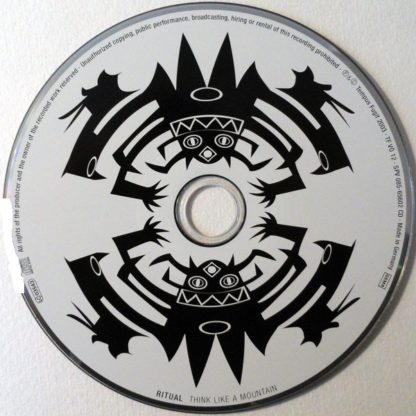 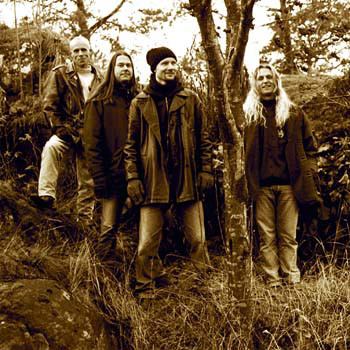 This is a free present (gift) if you buy

PROMO
Media: has a small crack in the non playing area of the disc which is the outside area close to the edge of the disc.
Sleeve:Near Mint (NM or M-)

Ten years after the formation of the band, Ritual from Sweden present their third album. Think Like A Mountain shines with a dozen powerful tracks between literal art rock, avant-garde and folk oriented compositions. Ritual is the main band of Patrik Lundström, who also contributed his great vocals to Kaipas latest CD. Released in March 2003. 12 songs
Studio Album, released in 2003

5 stars:
I’ve been a fan of RITUAL since their splendid self-titled debut. Patrik Lundström is a wonderful vocalist who also sang on the comeback album “Notes From The Past” from the Swedish progressive veterans KAIPA. “Think Like A Mountain” is RITUALs third full-length album. RITUALs music is complex and they tastefully blend acoustic and electric instruments. There are reminiscences to The FLOWER KINGS, GENTLE GIANT, JETHRO TULL, LED ZEPPELIN, YES, and influences from Swedish folk music. RITUAL has created a unique sound and actually they aren’t comparable to any other band. To categorize them as progressive rock isn’t entirely correct either. Some of the highlights are the opening track “What Are You Waiting For”, “Humble Decision”, “Once The Tree Would Bloom”, the title track “Think Like A Mountain”, “Moomin Took My Head” (they seem to be big admirers of the Moomin trolls as the first CD also contained a track inspired by Tove Janssons characters) and “Infinite Justice”. Its hard to talk about favorite tracks when the album is filled with great songs. So far RITUAL has never let me down. They’re one of the best bands in Sweden regardless the genre and they deserves all the recognition they can get.

5 stars: Classifying this Swedish quartet as ‘crossover prog’ is like calling GENTLE GIANT ‘prog related’: rock music doesn’t get much more proggy than Ritual. And the bands third studio album (in a ten-year span: these guys certainly aren’t in the same overachieving league as their fellow Swede compatriots in THE FLOWER KINGS) is almost as good as their 1995 début, showing the same strong melodic instincts and even more assertive musicianship.
In style the music ranges from light-hearted acoustic folk, often inspired by the childrens fantasy literature of Tove Jansson (by way of GENTLE GIANT: see ‘Moomin Took My Head’), to punchy electric Neo-Prog. This particular effort leans more toward the latter: thus the nervous Middle Eastern rhythms of the energetic album opener ‘What Are You Waiting For’, and the lush symphonic sweep of ‘Humble Decision’. Adding real strings to ‘Mother You’ve Been Gone Too Long’ does nothing to compromise the songs evocative strength, and the ‘Larks Tongues in Aspic’ power chords in the chorus of ‘Infinite Justice’ might have been borrowed from ANEKDOTEN, another thoroughbred in the crowded Swedish Prog Rock stable. ‘Once the Tree Would Bloom’, in which the busy acoustic guitars, hand-held percussion, and ethnic woodwinds bring out the bands deep Scandinavian folk music roots, but without the expected northern latitude melancholy. And in the end the aptly titled ‘Off’ closes the album on a note of near ambient elegance, with a simple melody played on a single, muted synthesizer.

In summary: its another outstanding effort from one of the hidden gems in the Prog Archives database, a band still waiting to be discovered by a lot of potential fans.
As the title of the album opener here says, What Are You Waiting For?

Be the first to review “RITUAL: Think Like A Mountain CD PROMO (Inside Out music). Prog Rock. Check whole album (full audio, every song)” Cancel reply