Signed / Autographed by many band members incl. Iron Maiden members
Paul Di’ Anno signed on the front cover ( the first page of the booklet)
and the original drummer Doug Sampson! (SEE PICTURE BELOW) 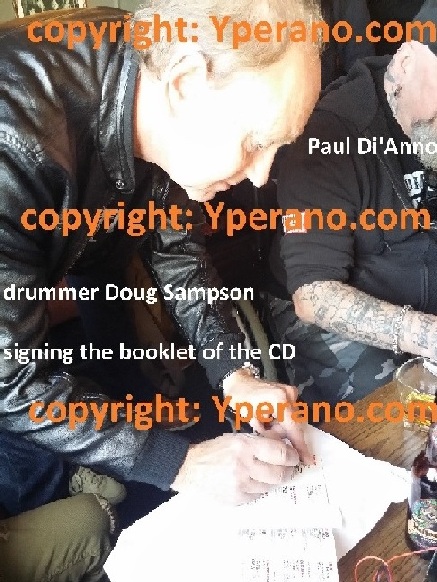 1990 NWOBHM compilation album called New Wave of British Heavy Metal ’79 Revisited. This 2Cd set was put together by Metallica drummer Lars Ulrich and music journalist Geoff Barton (Sounds).
Prior to this release, many peoples only exposure to the NWOBHM movement was Iron Maiden and Def Leppard… They had an awareness of this era because a lot of the bands I listened to referenced the NWOBHM in interviews and listed bands such as Diamond Head, Angel Witch, Blitzkrieg,Iron Maiden, Tygers Of Pan Tang etc as influences but never got to hear the real thing until this comp..
Unfortunately, this 2CD with the bonus tracks has been long out of print To this day, this remains my favourite compilation and I think i its a great introduction and snap shot of the NWOBHM. Along with the killer music, this album just holds a lot of good memories and is still very special to me for many reasons. It is an honour that it was signed by those -still- UK based legendary musicians like the original Iron Maiden drummer. For people asking why the price is high: 1) rare promo 2) this is the version with the 6 bonus tracks 3) it is signed by hard to track UK based musicians, so unless you are based in the UK, fat chance of ever finding those legends to have this CD signed! So please no offers and no suggestions for a reduced price. It will NOT happen.

Simply stated, this is the Lars Ulrich tribute collection, with the assistance of noted English rock journalist Geoff Barton. The title, New Wave of British Heavy Metal ’79 Revisited, states it clearly, as this extensive compilation traces the origin of one of the most dynamic and important periods in the history of hard rock and heavy metal.

The start of the ground breaking NWoBHM scene is typically associated with the May of 1979 gig at Londons Music Machine, which featured the billing of Iron Maiden, Samson and Angel Witch treading the boards. The metal resurgence was swift, as groups moved independently financed singles, and performed intense sets for the denim and leather clad, long hair punters. Word-of-mouth spread quickly, as the ’80s took hold.

Issued as a celebration of the tenth Anniversary of the post-punk metal take-over in the U.K., the two CD New Wave of British Heavy Metal ’79 Revisited set features a total of thirty cuts, which includes such artists as Diamond Head, Sweet Savage, Saxon, White Spirit, Raven, Def Leppard (when they mattered), Samson, Iron Maiden, Tygers of Pan Tang, Gaskin, Venom, Angel Witch, Trespass, Vardis, Girlschool and Praying Mantis. The young and hungry aggression from the new guard of metalheads prevails throughout the retrospective, which dates back to an era when the English economy was depressed, and the no-future punk scene was running on empty.

As with any compilation, there are a few cuts left by the way side, but on the whole this is pure headbandin’ action from the upstart leather ‘n studs brigade. Diamond Head is the only act represented on the retrospective via two songs (album opener “Its Electric”, and “Helpless”).

Iron Maidens entry is noteworthy as the raw version of “Sanstuary”, featuring the line-up of bassist Steve Harris, vocalist Paul Di’Anno, the guitar tandem of Dave Murray and Tony Parsons, and Doug Sampson on drums, was previously unreleased. I.M. recorded the number on November 14, 1979, and the song was subsequently transmitted over the BBC Radio One airwaves one month later, on the Friday Rock Show.

“Eddie” gives the collection of cuts an authoritative thumbs-up.