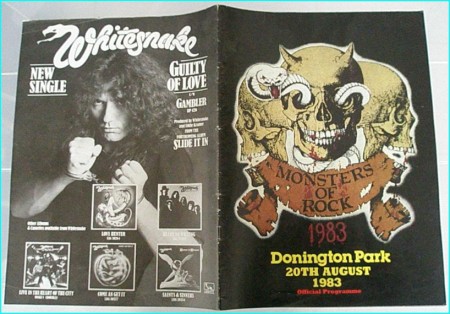 The fourth Monsters of Rock festival featured a variable lineup with a solid bedrock of hard rock and heavy blues – represented by Whitesnake and ZZ Top respectively . Twisted Sister, Meat Loaf, Ronnie James Dio’s ( ex Sabbath and Rainbow vocalist ) modestly self named outfit”Dio” and Diamond Head featured some quality players amongst their lineups , as did headliners Whitesnake, who featured ex Deep Purple keyboardist Jon Lord , skin thumper extraordinaire Cozy Powell and ace bassist Colin Hodgkinson from the semi legendary UK band Back Door. ZZ Top could of course always thoroughly entertain any crowd with their catchy blues/pop and were to be Donington headliners by 1985 on the back of their huge hit album Eliminator.

Twisted Sister were quite entertaining. Singer Dee Snider kept making references to ‘Rock N’ Roll’. ZZ Top were enjoying a bit of a comeback with their new album ‘Eliminator’ and in particular the singles ‘Gimme All Your Lovin’ and sharp Dressed Man’ with their memorable videos.
Mr Loaf was in good voice and still milking the phenomenon that was ‘Bat Out Of Hell’ now five years old and probably still in the charts somewhere. His backing band were competent but largely anonymous, and getting bombarded by anything that the audience could pick up and throw, which was very visibly pissing them off. One memorable moment was when one of the backing singers was hit by a plastic bottle upsetting her sexy stance’. She turned to the direction the projectile came from, shouted some abuse and flicked a finger before returning to the sexy stance’ and carrying on, what a professional…!!
Whitesnake did what was expected of them and with a slightly changed line up from their excellent 1981 appearance including drummer Cozy Powell playing at his second Donington. It was a crowd pleasing set (Love Hunter, Mistreated, Fool For Your Loving etc..) with Powells solo this year including low-flying helicopters as well as Tchaikovsky.

Twisted Sister arrived on stage with the announcement, “This ain’t no muthafuckin’ Tube tv show!”. Dee Snider, looked like a Mae West caricature in neon pink and black. A six foot drag queen, he had the audience in the palm of his hand from the get-go. He had them chanting, with relish, “I’m a sick muthafucka!” and, as tired as it sounds now, it worked a treat at that moment. They put on a great show and sounded really good, The Kids Are Back got everybody involved and I Am, I’m Me was another rapturous moment.

ZZ Top came on stage demurely, dressed in white with Billy Gibbons sporting a rather large stetson and Dusty Hill in a beret. As always, Frank Beard was not bearded nor did he have a big hat but he was wearing shades. All in all though, the group were somewhat understated. They played an absolutely faultless set with no gimmicks and no fuss. The songs were played so well that it could have been the LP played through Donnington’s PA.

From what had been a relatively disappointing year (1982), we now came to a year that I still recall as one of the best days ever topped off by a magnificent version of Mistreated by Whitesnake when Coverdale announced that this would probably be the last time he would ever play this song you just knew it was gonna be something special. In fact the overall Whitesnake performance is still my favourite of all the headlining acts over the years. Here I go again was also brilliant, especially Coverdale’s singing at the start.

Visually the highlight was Cozy Powell’s drum solo, which now incorporated the 633-squadron music as well as the 1812 overture. During the 633-squadron section the festival site was dive-bombed by light aircraft (helicopters I think). There was over £50,000 worth of pyrotechnics used during the Whitesnake set. Magnificent.
But Whitesnake were not the only band on form on the day.

Twisted Sisters Dee Snider probably gave the best introduction to a song ever at Donington This next songs a bit slow for Twisted Sister but its f*****g mean. The song in question was Destroyer from their Under The Blade album.

Apart from Whitesnake, my other favourite band of the day were DIO. The band were playing their very first ever live show (apart from a couple of warm-ups). The soon to be classic album Holy Diver had just been released. Their set included a mixture of songs from this album plus various Rainbow and Black Sabbath classics including Stargazer, Heaven and Hell etc.

On paper an outstanding one day line up. In actuality a bit hit and miss. Hits ZZ Top and Dio. More about Meatloaf later. Diamond Head sounded good from the brief bit of them I saw. The Snakes were too indulgent for me.
I had no idea what to expect from Dio or the ZZ Top, apart from perennial compilation album track tush. They were both excellent. Holy Diver was a brilliant first album and they did it full justice and with a choice selection from his back catalogue Dio were instant premier league. The ZZ Top were just chilled. Turned up, plugged in and off they went into a land all their own. And we were the better for sharing it. The start of a 25 year love affair with the little old band from Texas.

The one “major detail” that your contributors missed was that Whitesnake had two large towers of speakers in the middle of the crowd with lights on them. At one point Jon Lord goes into the Close Encounter of the Third Kind bit and a helicopter moved overhead which was suspending an identical light array. The sound and lights where going around in circles just like in the Close Encounters movie. To this day I say that was the coolest stunt ever performed at a Rock Concert. No doubt about it this was Whitesnake at their peak!
Whitesnakes set was filmed for official release as the bands first ever live video, although it features only a portion of their set.. However, its not likely that any other bands were filmed as no releases , official or boot have emerged that we know of. The BBC seem to have broadcast portions of some sets on FM.

Am I Evil?
In The Heat Of The Light
Borrowed Time
Don’t You Ever Leave Me
Sucking My Love’
Play It Loud’

” Well, there was that time we were performing at Donnington. I think I dodged an apple or something! That place is known for people just chucking stuff at the bands. They throw stuff at everybody! They threw stuff at Meatloaf, they threw stuff at ZZ Top… anyone who got onstage. There are 40,000 people in the audience and at any given time, 10,000 of them don’t like the band. So they bring extra fruit!”

Whitesnake
Walking In The Shadow Of The Blues
Rough An’ Ready
Ready An’ Willing
Guilty Of Love
Here I Go Again
Lovehunter – Micky Moody Solo
Mistreated – Soldier Of Fortune
Jon Lord Solo
Cozy Powell Solo
Ain’t No Love In The Heart Of The City
Fool For Your Loving
Thank You Blues
Don’t Break My Heart Again
Wine, Women An’ Song 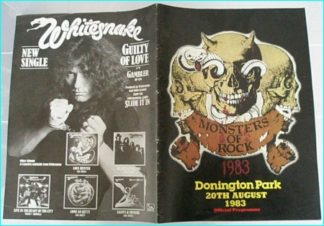