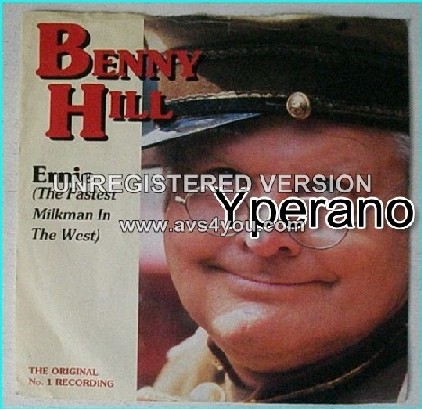 “Ernie (The Fastest Milkman In The West)” is an innuendo-laden comic song written and performed by English comedian Benny Hill. The song was first performed on TV in the 1970s, and released as a successful recording topping the UK Singles Chart in 1971, reaching Christmas number one. One of the best novelty records ever!

The lyrics story line is inspired by Hills early experience as a milkman for Hanns Dairies in Eastleigh, Hampshire. Market Street mentioned in the lyrics is an actual road in Eastleigh. The song tells the fictional exploits of Ernie Price, a 52-year-old (68 in the original TV version) milkman who drives a horse-drawn milk cart. It relates his war with the bread delivery man (“Two-Ton Ted from Teddington”) and their efforts to win the heart of Sue, a widow who lives on her own at number 22, Linley Lane.
In the end the two men fight with the wares they carry on their carts, and Ernie is killed by a rock cake underneath his heart followed by a stale pork pie in his eye (a fresh meat pie in the original TV version).
Sue and Ted then marry, but Ernies ghost returns to haunt them.
Hill wrote Ernie in 1955.
In 1966, Frank Gallop had a U.S. hit with “The Ballad of Irving” which had the same melody and a similar metre.
Hill performed the song on The Benny Hill Show in 1970. The original clip is seldom repeated as it was made in black and white owing to a technicians’ strike, but the episode has been released on DVD on both sides of the Atlantic.
The following year, it was included with minor lyrical revisions on Hills album Words and Music. When it was released as a single on EMIs Columbia label, it became a surprise number-one one chart hit, topping the UK singles chart for four weeks at Christmas 1971, keeping the T. Rex single Jeepster at the number two spot. A promotional film was shot starring Hill as Ernie and Henry McGee as Ted.
Hill re-recorded the song shortly before his death in 1992 for the album Benny Hill…The Best Of. The re-recording has more lightweight instrumentation and critics felt that it was redundant. There is one trivial alteration to the lyrics: “a shilling” is changed to “10p”.
Ernie was referenced in the Superhero segment of one episode of BBC TVs Basils Swap Shop, with an Ernie lookalike appearing at the superheros flat only to be told that speedy delivery of milk was not a super-power.

Be the first to review “BENNY HILL: Ernie (The Fastest milkman in the west) 7″ + Thing-A-Ling-A-Loo. Classic and really funny. Check video.” Cancel reply 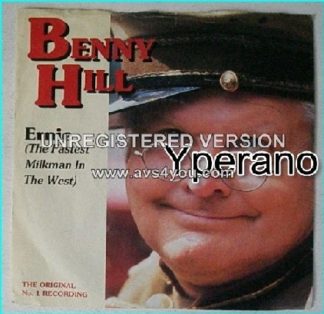