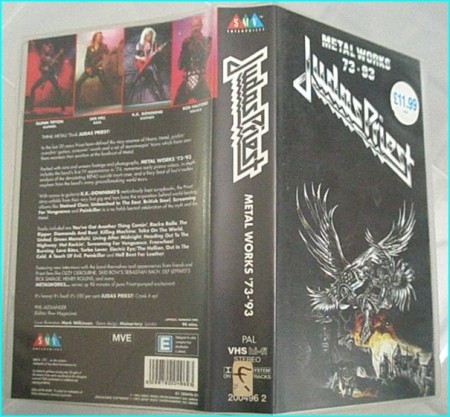 Type: Video/VHS
Release date: May 25th, 1993
Label: SMV Enterprises ©1993
1. 93 minute video/interview/history mix
To my knowledge, been transferred to the DVD format, as yet. The video is filled with rare and never before seen recordings and also includes out-takes from their first T.V. appearance in 1974.

All material was previously available.

Packed with rare and unseen footage which includes vintage material from the band’s first ever TV appearance in 1974, through to their historic performance at the US Festival in front of 300,000 people in 1983, and countless larger-than-life American tours as well as coverage at the controversial Reno suicide court case. Metal Works provides Priest fans with an indispensable no-holds-barred celebration of 20 years of heavy metal! Featuring new interviews with the band themselves and major Priest fans including members of Skid Row, Def Leppard, Pantera, Napalm Death, Deep Purple, Ozzy Osbourne and Slayer among others, Metal Works serves up 90 minutes of pure Priest-pumped excitement!

Format: VHS Tape
First off, I want to let whomever may read this know that I have been (and continue to be) a fan of JP since the Sad Wings of Destiny album. Therefore, it is no surprise that I would enjoy this video retrospective. Let me share my thoughts with you about this video.
It starts off by describing how the band got together, and interspersed with this, is commentary by other Artists whom had seen or new of JP in the “early days” (i.e. Rick Savage, Roger Glover, more). It then moves on to describe how JP’s image evolved over the years. Next, it chronicles their trouble with the law i.e. the suicide case from Utah. Finally, it briefly describes their split with the GREAT Rob Halford (come home Rob!!!!).
So why only 4 stars? Well, when I purchased this I was hoping to see concert footage from the “early days” or at least something I had not seen before. The vast majority of the concert footage was from the Memphis show in 1983 (and I believe that most die-hard JP fans already have that one). It is my hope that if this were to be re-released as a DVD they would add A LOT more concert footage from the “early days” (I would love to hear the whole Dreamer Deceiver rather than a 20 second clip).
Anyway, it’s still very interesting and I would recommend it to anyone whom is a fan of METAL. P.S. I want Rob back (please).
If you only like Priest a little, you might not want to get this. It’s much more an interview video, talking to people like Sebastian Bach (ex-Skid Row) and members of Pantera and people who have known or have played with Priest in the last 20 years. There’s clips of videos, and a few full music videos, and a couple live clips. It’s really good if you absolutely love Judas Priest, but if you’re looking for a “Behind The Music” type of video on Judas Priest, this isn’t it. It tells a lot, and it’s funny.
This video is actually called Metal Works 73-93, not World 😉 and has not, to my knowledge, been transferred to the DVD format, as yet. The video is filled with rare and never before seen recordings and also includes outtakes from their first T.V. appearance in 1974.

5.0 out of 5 stars Beautiful retrospect of the worlds best HM band
Metal Works 1973-1993 [VHS] (VHS Tape)©1993
The Priest rules as never before with over the top live clips intermingled with intimate interviews. With references to Spinal Tap, the band at times makes fun of itself, but deep down everyone knows they are the heavy metal masters. A must for the die hard fan, insight for sceptical. The video ends with Rob Halford’s announcement of departure from the band. Beautiful, absolutely beautiful.

5.0 out of 5 stars JP RULES!!,
“Mourn for us oppressed in fear
Chained and shackled we are bound
Freedom choked in dread we live
Since Tyrant was enthroned”
Tyrant
(Tipton – Halford)

5.0 out of 5 stars A MUST HAVE.,
Metal Works 1973-1993 [VHS] (VHS Tape)©1993
THIS VIDEO IS BEAUTIFULY DONE FOR ONE OF THE MOST AWESOME BANDS OUT THERE. JUDAS PRIEST. IT HAS SOME COOL VIDEOS. THE TURBO ISN’T EXACTLY “REAL” LOOKING, BUT ONE OF MY FAVORITE VIDEO WOULD HAVE TO BE HOT ROCKING. JUST TOO GOOD. GO OUT AND BUY IT.

Be the first to review “Judas Priest Metalworks 1973 – 1993 VHS. Never been transferred to the DVD format, with rare & never before seen recordings” Cancel reply 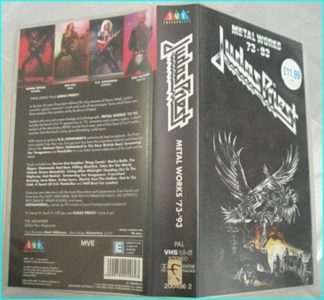 You're viewing: Judas Priest Metalworks 1973 – 1993 VHS. Never been transferred to the DVD format, with rare & never before seen recordings € 11.92
Add to basket