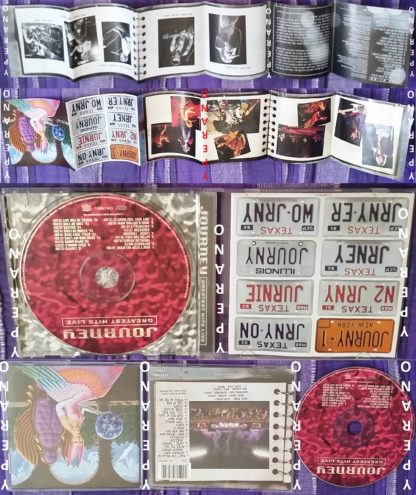 Greatest Hits Live is a CD released by the rock band Journey in 1998, spanning recordings from 1981 to 1983 – at their absolute peak. It contains songs from the albums Infinity up to the album Frontiers.

——————————————————–
5.0 out of 5 stars An Amazing Document of Journeys Live Conquest of the 80s,
Prompted by the ecstatic success of their 1996 reunion album “Trial By Fire,” Journey issued “Greatest Hits Live,” a startling document of their domination of the 1980s touring grounds. Despite the title, this is definitely not a mere re-release of hits, presented live in an empty manner of sweetening the deal. And though most of the tracks here were indeed hits, Journey soldiers through a fine canon of work with an explosive energy that challenges the original versions.
Despite some re-mixing by Kevin Shirley (who produced “Trial By Fire”), “Greatest Hits Live” possesses a truly live feel due to the fact that no overdubs were included. Culled from 1981 and 83 performances in Tokyo, Oklahoma, and Texas, Journey triumphs with the enduring and well-chosen introduction ‘Don’t Stop Believin,’ and brilliantly shifts tempos and strengths on tracks like ‘Lights,’ send Her My Love,’ and still They Ride.’ ‘Wheel in the Sky’ was a great choice to end concerts with, as the subject of carnival life applies to a life of a touring rock band. The output of vocalist Steve Perry, guitarist Neal Schon, and keyboardist Jonathan Cain shine bright, but its also worth noting that the rhythm section of Ross Valory and Steve Smith (bass and drums, respectively) are particularly worth mentioning, as the recording techniques bring justice to the their tight and energetic rhythms.
Journey was one of the biggest bands of the 1980s, despite the critical association with the dreaded “80s pop” sound. As if the earlier released “Captured” didn’t show their power on stage, “Greatest Hits Live” showcases the ominous, unlimited spectacle that is Journey.
——————————————————–
5.0 out of 5 stars Simply incredible,
Journey is one of those few bands that sound better live than in the studio. This CD features their pre-“Raised On Radio” hits, many of which sound better here than in their original form. The production quality is superb, and each member of the band performs exceptionally well. The live version of “Escape” is incredible, as is “Wheel In The Sky”, a song I never liked in its studio form. Steve Perrys audience interaction on “Anyway You Want It” brings a new element to the song, and “Don’t Stop Believin'” has never sounded better. Even if you are only a mild Journey fan, pick this one up!
——————————————————–
5.0 out of 5 stars Still Believin’,
This is a great disc! I have had a copy of CAPTURED for years, but that only covers Journeys big hits before Jonathan Cain came on board. This is for those folks who grew up listening to Journeys huge hits on the radio. And can they rock! The stereo separation is nice, too…Cains keyboards in one channel, Neal Schons guitar in the other. They don’t make bands like this anymore. If you are a Journey fan, you’ll want to hear the live renditions of some great songs…mainly from ESCAPE and FRONTIERS.
——————————————————–
5.0 out of 5 stars It will make you feel like you’re there,
Journey is my favorite rock group of all time, but I hadn’t ever heard them live, so I knew I had to get this cd. Right after I started listening to it I was disappointed for a minute because some of the songs such as “Don’t Stop Believin'” didn’t sound just like they did on the radio. But after I listened to it awhile longer, I realized that Journey and Steve Perry were just trying to have fun and be entertaining for their audience, and you’ll know what I mean when you hear “Lovin’, Touchin, Squeezin,” and “Any Way You Want It.” On the other hand, many of the songs are just as perfect live as they are on the radio, such as “After The Fall,” “Separate Ways, Worlds Apart,” and “Stone In Love.”
The more I listened to Journey performing live on this album and how the audience reacted, I actually felt like I was in the audience watching them perform live. Steve Perry really shows his talent as one of the best singers ever, and the others in the group show their great musicianship with their guitar and bass solos. I decided after I listened to the whole album that it was one of the best live albums I’ve ever heard, and I still listen to it all the time. If you’re a real Journey fan, trust me, you won’t regret buying their greatest hits live. Its hard to put into words how great this album is.
——————————————————–
5.0 out of 5 stars another underated super group,
after listening and comparing this album with others done by groups recognized as great power groups, i was shocked by how well they measure up to the likes of cream,zeppelin and santana. sorry to admit that i didn,t even know who their lead player was. neal shouns work on this album compares favorably with jimmy pages work on how the west was won and without overpowering steve perrys usual superb vocals. if you are only going to own 1 journey album this probably needs to be it. it also shows that, despite what some of us older rock fans believe, a few great groups did really exist in that decade.
——————————————————–
5.0 out of 5 stars Journey is the greatest band ever!,
I’m only 22 years old. But i grew up listening to the songs of Journey! It takes me back to long summer road trips with my father. I’m forever grateful that my father turned me on to such great music. This is the one cd that you can just put in and let the whole thing play.
——————————————————–
5.0 out of 5 stars Timeless classic. BUY THIS!,
This sounds BETTER than the studio cuts. I saw Journey live during this tour and what a great experience. They are tight and punch out tunes with energy and vigor. Perry reaches a new level. Schon wails. High school memories race back to me. A band that will NEVER go out of style. I’m glad to see this music resurrected.
——————————————————–

5.0 out of 5 stars Great live album from a great band,
Great melodies, super tight band, great vocals and all live with no overdubs. Most live albums are full of fixes and overdubs but this band was a band that sounded live the way they did on the record but with more live energy. Steves voice soars. If you are a Journey fan this is a must have. Obviously they were much more than just an 80s pop rock band. They could really play and sing great. Refreshing in a time when so many acts are lip syncing, singing to tracks, or just singing poorly. This is an example of how a great band is supposed to sound live. They made sure they gave the audience their moneys worth. And so does this CD.

This CD also comes with a nice fold out card stock inner booklet with some very nice pictures. All of which I’ve never seen before (unpublished?).

As for some of the reviewers saying that Steve Perry is reliving the past by putting out the Houston Live 1981 & Greatest Hits DVDs, let me shed some light to this myth. Steve Perry was approached by John Kalodner (A&R Guru) to get involved with these projects and oversee production.

Other greats in the live CD are “After the Fall”, “Faithfully” (who doesn’t have old memories with this song?) , and “Send her my love”.

“Stone in Love” and “Still they Ride” are great not so known Journey songs.
Overall I dig this CD and have been listening to it straight for the past two months. 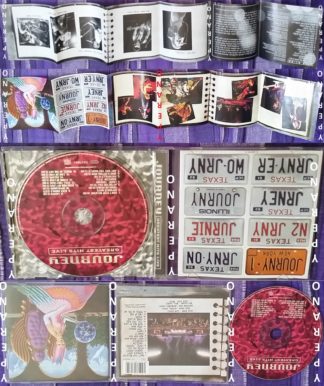