IGNITOR: Take to the Sky CD classic yet fresh take on the heavy metal of the 1980s. CHECK AUDIO SAMPLES 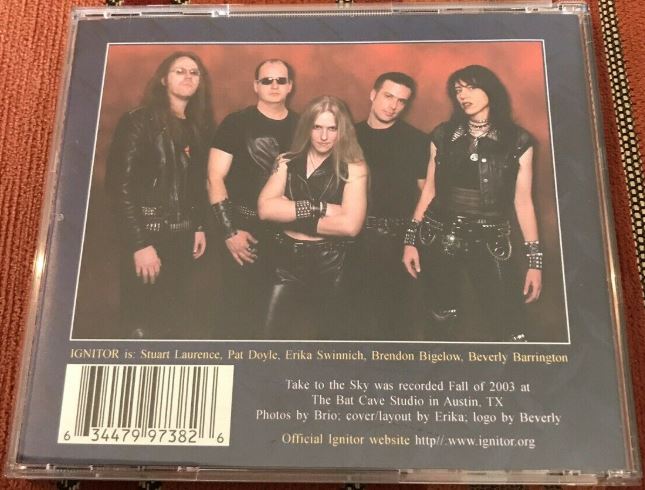 Formed in 2003 by Stuart Laurence (lead guitar), Pat Doyle (drums), Beverly Barrington (rhythm guitar), Brendon Bigelow (bass) and Erika (vocals), IGNITOR exploded out of the Texas metal forge with scorching intensity. Playing a classic yet fresh take on the heavy metal of the 1980s, IGNITOR quickly proved they were an unexpected force from US shores with which to be reckoned.

The band released “”Take to the Sky”” in April 2004. “”Take”” was highlighted as CD of the Month by Germany’s Rock Hard magazine, and PowerMetal.de announced IGNITOR as one of the Top Newcomers of 2004. Scores of favorable reviews poured in from all over the world: from the States to Germany, down to South America and over to Japan. The classic metal clan embraced IGNITOR with open, leather-clad arms.The band is poised to prove that the flame of true heavy metal will never burn out.
IGNITOR is on fire.

Death for false metal!
Well this is a hell of a nice surprise. Ignitor are a new band from Texas, featuring Agony Column’s Batlord on guitar and former Autumn Tears beauty Erika Swinnich on lead vocals. “”Take To The Sky”” is their first demo, and it is completely awesome.

There just can not be enough bands doing this kind of good old back to basics Heavy Fucking Metal for my money. Ignitor call to mind classic Judas Priest, Maiden, or even Manilla Road at their most pugilistic. I found myself reminded quite a bit of fellow Texans Aska, or even Icarus Witch, as their brass-knuckled riff style is very similar, though Ignitor have no trace of progressive tendencies anywhere â€“ they just kick ass full steam ahead. Starting off with the catchy headbang-festival of “”Demon Slayer”” I was all smiles, as this is just first-rate old school metal all the way, with a chorus you’ll be singing along with before the song is even half-over. Second track “”Execution”” is a bit of a let-down after that, as while it has some good parts, the song is slightly ‘rockier’, and has rather pedantic anti-W lyrics. “”Grey Ghost”” is what passes for a slow song with this band, really more of an epic in the vein of old Maiden or even early Fates Warning. The title cut is exactly what I expected: a full-speed barn burner with Halford-style wailing vocals. And speaking of vocals, for a chick who sang with such a gothy/classical band as Autumn Tears, Erika fucking wails on this disc. She actually sounds almost spot-on like Geddy Lee in the old days, as in “”Fly By Night”” old, but she powers it out like Geddy never did.

“”The Last King Tiger”” may be my favorite song here, as it showcases what this band can really do: heavy riffs, slower crunch trading off with speedy careen, and a chorus you can’t stop singing. Killer fucking tune. When I first heard “”Lean Mean Leather Machine”” I said ‘now I’ve heard everything: a vampire biker chick song’. It is that, and it kills, if not as hard as some of the other stuff here.

If you are lamenting the loss of the old days of US-made metal, then you have to get ahold of this, as it is one of the best slabs of American steel I have ever heard. I certainly hope this band gets a deal so they can put out a real CD, because I will be first in line to get that fucker, believe me. Even if they never appear again, “”Take To The Sky”” will become one of those sought after underground gems spoken of in hushed tones by those who have been lucky enough to hear find it. Ignitor are fucking cool, and I hope this is not the last we hear from them.”

Be the first to review “IGNITOR: Take to the Sky CD classic yet fresh take on the heavy metal of the 1980s. CHECK AUDIO SAMPLES” Cancel reply

You're viewing: IGNITOR: Take to the Sky CD classic yet fresh take on the heavy metal of the 1980s. CHECK AUDIO SAMPLES £8.66
Add to basket