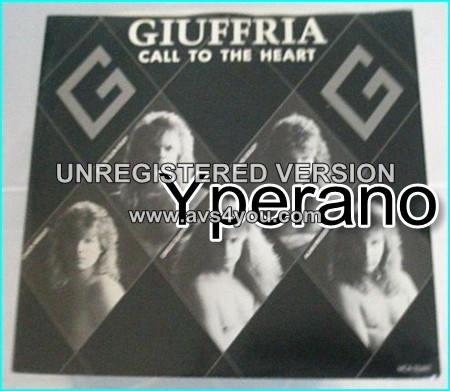 This is a song from the self-titled début album of American rock band Giuffria, released by MCA Records in 1984, and was produced by Andy Johns. The album peak position on The Billboard 200 was #26 on March 02, 1985. It was the most successful album from the five released by Giuffria then House of Lords from 1984 to 1992.

Keyboard maestro Gregg Giuffria originally planned to retain the Angel title for his second high-profile cinematic rock show, but the scalding ivories soaring throughout this record prove hes fully in charge, making the Giuffria moniker an apt band name. The long, blond angel always wraps all his projects with some cool keys.
Giuffria songs are built around David Glen Eisleys voice, and enjoyment depends on how one takes to his heavy heaving.
Wistful weeper “Call to the Heart” rightfully remains Giuffrias crowning achievement and lone chart glory.

Do you love keyboards set to stun? Well you get them here in abundance. Do you love well crafted songs with hooks so strong they never leave you? Well you get that too! Do you like your vocalists to have a little more originality than the latest Robert Plant wannabe? Well you get one here too! This never left my stereo when I first bought it in 1984. It still spins with regularity.
The single “Call to The Heart” which is perfectly crafted AOR suitable for radio though not lacking in originality. The B side song is the best thing to which Greg Giuffria put a keyboard since Angel. Giuffria sets the keyboard on fire, and the rest of the band fills in with melodic energy. These guys were way ahead of their time. Although they’re (unfairly) lumped in with the rest of the 80s hair metal bands, they actually really had something to offer. The music is majestic, bombastic and haunting.