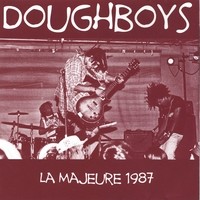 some of the most thunderously driving melodic punk rock ever to come this way.
The members of the Doughboys have been playing in bands for some time now but their obvious high level of playing ability hasn’t compromised their desire to blast away. Kastner played with Montreal’s hardcore group the Asexuals for about 5 years in the mid eighties, and the other band members are also veterans of other punk groups. The Doughboys released their first record themselves in North America in 1987, the fabulous Whatever lp. For a self released effort it did very well, attracting enough attention to get licensed in several countries in Europe, where the band has built a good following. It also got them signed to Enigma, who released this year’s Home Again on their Restless label.

Tracks: The Forecast / Stranger From Within / I Remember CDEP.