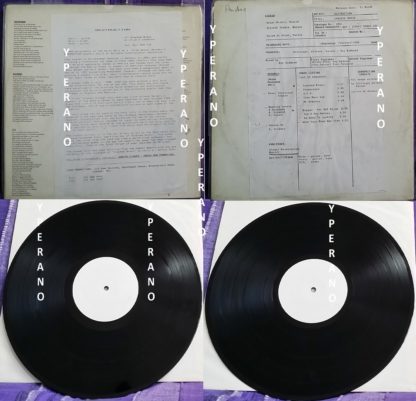 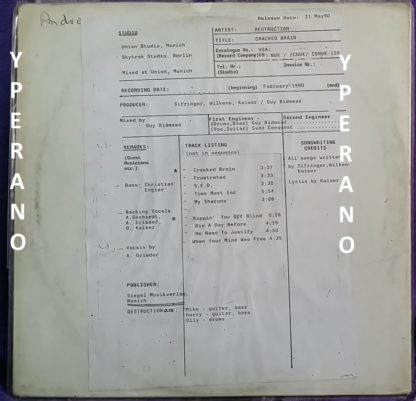 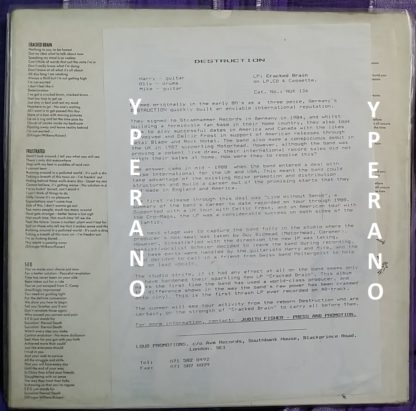 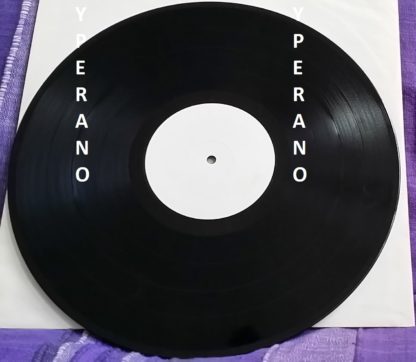 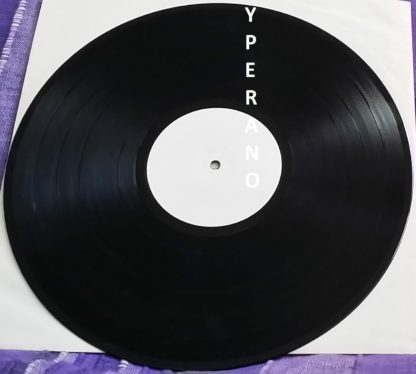 DESTRUCTION: Cracked Brain TEST PRESSING LP. This album contains killer songs a cover “”My Sharona”” that needs to be heard to be believed!

Cracked Brain is the fourth full-length studio album by Destruction. It is the only album of their official discography not to feature “”Schmier”” on vocals. Andre Grieder sang on this record. Featured is a cover of The Knack song My Sharona.

Not just a forgotten jewel – 97%
By the end of the 80’s, the whole thrash scene was going through changes, leaving behind the amusing cliches of evil and brutality of the half of the decade, sadly. In those times, the sub-genre became progressive, melodic and mellow, nothing to do with the original concept. Bands like Toxik, Heathen, Iced Earth, Paradox, Meliah Rage, Laaz Rockit, Iron Angel, Realm or Mortal Sin put a lot of attention on melody, making much more sophisticated polished thrash, getting really close to the power metal style and its characteristic elements. The result of that dangerous experiment was luckily positive, so many other followed that pattern: Artillery, Annihilator, Whiplash, Flotsam And Jetsam…it seemed that thrashers were decided to forget about violence and brutality for a while. What would the Teutonic bestial groups do about? Would they follow that trend?

It was time for changes for Destruction as well, Schmier left after his essential contribution on the first 3 studio albums and the couple of Eps that made these guys become the Lords of Brutality, the most merciless and harsh from the Teutonic metal league. His distinctive unique intense voice must have been something difficult to replace, along with his crucial song-writing work. It was obvious that the sound would change into something really different from anything we heard before. However, the riffs are still tremendous, violent and remarkably solid, perfectly executed and tough. Rippin You Off Blind, Time Must End or Die A Day Before You’re Born are an outstanding exhibition of brilliant skilled guitar work by both Mike and Harry. Their fast fingers define and build this killer thrash sound that, this time, is not as raw as before. Complexity and technique are present as usual, but the German thrashers are not only focused on speed and sonic aggression, now melody is more notable. And the improvement and progression of the splendid instrumental display in songs like When Your Mind Was Free, No Need To Justif, or  S.E.D.  is amazing. I can’t count how many variations on the main riff, alternating riff sequences, sudden tempo changes, incredible coherent bridges and breaks along with total shredding picking parts can be found on this record, there’s a whole bunch of them indeed that make this stuff get really technical. There’s not a single sign of weakness, tediousness or mediocrity here; the song structures have no weak spot, very elaborated and progressive at times with no lack of continuity at all. Destruction demonstrate their immense potential and talent on each track, so those who accused them of being a noisy inconsistent band should have a serious hearing problem. The title-track and Frustrated are straight fast numbers of total headbanging raging thrash at its best, more than any other on the album, featuring a more simple structure and insistent vocals that work perfectly to make them unforgettable and catchy. Many disliked the The Knack cover, but i didn’t; I personally enjoy unpredictable covers like this, just like Megadeth playing Howlin Wolf or Sodom with Bryan Adams, Coroner with The Beatles, Intruder with The Monkees or Viking with Pat Benatar’s stuff. Fun and humor can make an enjoyable combination with thrash, unless if you’re one of those people who can hardly get jokes.

Andre Grieder did a great job, he didn’t make me forget about Schmier but his voice sounds quite convincing and proper for these compositions. Sometimes he tries to emulate the insane high screaming of the former Destruction bassist and vocalist, with humble sloppy results, but most of the time he provides the music of passionate rough vocals and cool lyrics. The verses are now abstract and putting attention on fantasy, insanity or pollution, different from the blackened evil early issues but still interesting and well-chosen. The guitar work, in particular Sifringers, is magnificent, extraordinary and outrageous; the creativity and virtuoso on riffs, harmonies, hooks, solos and everything else are remarkable and controlled completely, very professional. Particularly, some baroque classical solos are delightful and executed with perfection, Mike avoids improvisation and chaos and demonstrates his experience and abilities, why is he so underrated? The rhythmic section is powerful, defined and performed ideally, although I wish both bass guitar and double bass-drums would be louder in the final mix. The production is decent, clear and kinda dry so the music sounds very polished, sophisticated, not crude or rough as before. It fits the nature of the songs though, just like other thrash records of that time. The only handicap is the distant and discreet presence of the bass lines, as I mentioned before, they’re hard to heard. There’s a bit of confusion about who played bass in this long-play, both Wilkens and Sifringer and future full member Christian Engler as session musician here get the credits for that but it’s not specified clearly (well guys, did you think replacing Schmier would be easy?). So the final result is satisfactory, consistent and amazing, one of the many great albums of these guys.

We all know what happened next: this fine line-up lasted a short period only. This record remains unfairly ignored and forgotten, just like Sodomâs same year release Better Off Dead. I guess everybody was too busy listening to Kreator’s superior masterpiece Coma Of Souls, but I really recommend this supreme jewel to anybody who’s into Teutonic metal or feels sceptic about Destruction’s stuff without Schmier. This is not really what I would exactly call a sandwich without bread, because Mike was still in the band, so don’t hesitate to check this out. In 1990, Destruction were still playing their killer relentless music with no mercy or compassion. They never followed the power thrash trend of the early 90’s luckily, so here you will find speed, aggression and brutality, more polished yeah, but still memorable. 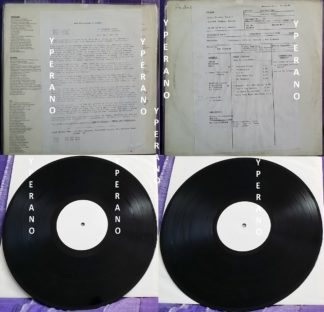