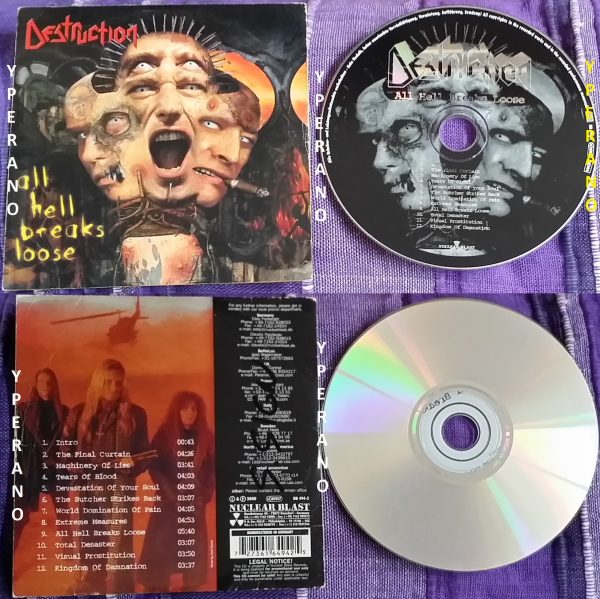 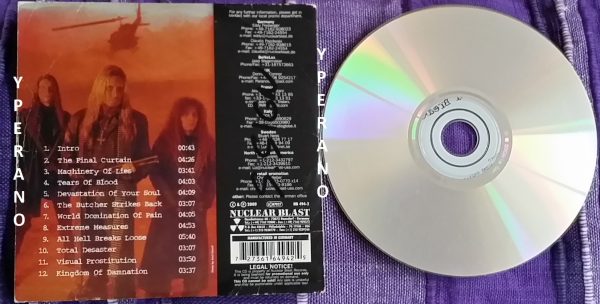 5.0 out of 5 stars Praise Thee Oh Masters!,
Firstly allow me to voice my opinion on the return of one of the most influential Thrash acts of all time by saying Yeeeeeeeaaaaaahhhhh!!! Ok, now that I’ve got that off my chest we can get down to All Hell Breaks Loose. I didn’t intend to go into a long-winded commentary on the bands sudden reappearance on the scene, which for me was a complete surprise and a dream come true. I honestly had no clue this was coming until just days before its release. With two-thirds of the original line-up back, you know those of us who grew up banging our heads to these guys are ecstatic to say the least. Its been nearly 10 years since the real DESTRUCTION put out an album. I stress ‘real’ because, as many of you may be aware, once all the original members had departed, the band continued to live on but played very un-DESTRUCTION like material and released only one album since Cracked Brain. The last truly memorable DESTRUCTION outing was in 1988 so expectations must have been high. That out of the way, this is bliss!
I had to set aside my initial opinion and settle down a bit because after my first listen I was completely blown away by All Hell Breaks Loose. Perhaps it was my excitement over the bands reformation. Whatever the case, I bathed in this albums ferocity many times over before coming to a conclusive opinion, that being that this thing shreds! Not perfect mind you, but DESTRUCTION come roaring back out of the depths of oblivion with startling power and aggression. I never envisioned the band would take an even more aggressive angle than they’d left off with over 10 years ago but here it all is and one gets the impression that Schmier and Mike saved up all their anger and discontent over all these years and packed it into one disc. With the album beginning much like Release From Agony with its cushy melodic intro, you are warned not to be lulled into a sense of complacency because seconds later the album goes off like a one megaton blast as “The Final Curtain” explodes in a fury of Thrash Metal dominance. My first reaction was one of ‘Oh hell yes!’ as the band tore up the atmosphere with a classic riff that would have sounded just as great on Infernal Overkill. DESTRUCTION have kept the base components of their 1980s style and added a coating of modern sound and finesse, partly due to Peter Tagtgrens production work, which not surprisingly, has some HYPOCRISY filters in the guitars. The songs on this album have more in common with those found on 1986s Eternal Devastation than any other DESTRUCTION release, although there are times when I’m reminded of the bands 1985 debut full-length release. ‘Gutsy’ is a word I would use to describe this affair as one pummeling track runs into the next. The band get off best on on tracks like the aforementioned opener, “Machinery Of Lies”, “The Butcher Strikes Back”, the title track and a patently awesome re-recorded version of the classic “Total Desaster”, now renamed to “Total Desaster 2000”. Hearing that song again and how much improved and blistering it is on this album got my blood pressure soaring! Its tasty Thrash all album long and I’d be a fool not to mention how much better Schmiers new shrieking style sounds. Hes essentially disked the higher pitched yelps he was so well-known for and gone with a far more serious and angered tone. As always, Mikes guitar playing is topnotch and new drummer Sven Vormann handles the drum duties like a true maniac.

5.0 out of 5 stars They’re back…finally,
Along with Kreator and Sodom, Destruction was Germanys answer to Slayer and Metallica. One of the better thrash bands of the 80s, Destruction actually made few waves here in the States. This is a shame, because Destruction was a great band. I read in an interview a few months back that the former-Destruction frontman, after being hounded by fans to reform, did just that. This album is what you would expect from a talented thrash band: fast and energetic. This album is welcome in todays world as a change from all the Korns running around the scene. Long live Germanys best thrash band ever!

5.0 out of 5 stars They’re Back!,
One of the best and most important Thrash Metal bands of all time, Destruction, are back in full strenght… thanks to the return of original singer/bass player Schmier. This is my favorite album of 2000. It is technical. It is talented. It is fast and aggressive. Forget the no-talent, MTV-compliant, Alternative Rock bands like Korn or (recent) Metallica. If you want “Metal”, this is it. As a 19-year Metal veteran, I can say that this is Thrash at its best. Simply put, if you are a Metal fan, you must get this cd!