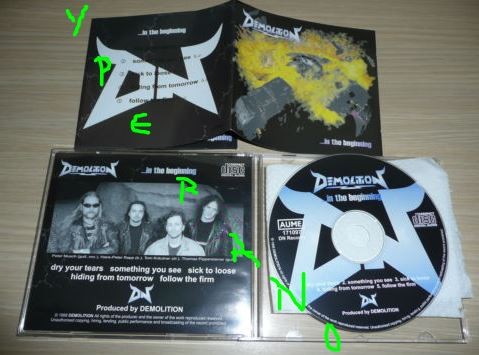 CD DEMOLITION – IN THE BEGINNING! Rare metal indie cd, released back in 1998 by the band themselves! CD and inserts are in excellent condition. Very hard to find nowadays. This one comes highly recommended!

DEMOLITION – “… in the beginning”

Self-distribution ”
… In the beginning “, the debut mini-CD DEMOLITIONs, although already dates from 1998. HAMMERFALL-like nursery rhyme melodies are nowhere to be heard, as DEMOLITION go much harder, thanks to the harsh, deep voice, the rhythm guitarist Peter Musch and a slight MOTÖRHEAD influence. Through clever sprinkling of breaks and tempo changes in the right places, it maintains the excitement. Also the sound -especially given that this is a self production- more than just fine.
————————————————————————-
When in 1996 Power Metal band HAPPL disbanded, members Thomas Pippersteiner and Tom Kräutner decided to pursue their Metal careers and formed DEMOLITION. Completed by Hans-Peter Rapp and, since 1998, Peter Musch, the band recorded their first self-produced CD “…In The Beginning” in 1998.

Unlike the style of their former project, DEMOLITION plays Thrash Metal, similar to legendary acts from neighbouring country Germany. Each of the tracks of “…In The Beginning” harbours the essential and typical power that good Thrash Metal should contain. While the guitars work mainly based on chord riffs (both fast and slower but grooving passages), there are also plenty of solos woven through the songs, as well as some melodic lines. For a first release this is pretty good though, and definitely recommendable for Thrash Metal fans.
—————————————————————————
This sounds really great. Quite aggressive but nice. Tom Kräutner on drums does a good job. Same thing goes for Peter Musch (guitar & vocals), Hans-Peter Rapp (bass) and Thomas Pippersteiner (guitars).
Already the opener DRY YOUR TEARS is tremendously groovy. Closely followed by SOMETHING YOU SEE!
—————————————————————————
Thrash Metal from Austria, who often reminds of the best times of Pantera and Metallica.
—————————————————————————
Thrasher / speed thrash metal a la Slayer and Metallica with some mid-tempo songs (does not mean that the songs are not brutal!). A glance at the back cover tells me that this EP (5 songs with a running time of 27.41 min- silver disc. The production is great and both guitars and the drums have a really fat sound! The booklet is fine, all the (usual Thrash) lyrics are printed inside, as well as some pics of the musicians (vocalist / rhythm guitarist Peter Musch visually reminds me of a James Hetfield around 1991).
Lets go for a short intro (funny noises!-water rippling in the Distortion???? ?) damn hard, with the catchy, Dry your tears.” A mid-tempo song par excellence, with cool chorus and horny solo! On to the similarly crazy about, Something you see which again has a cool solo! The song has a personal touch! Solid song! Ahhhh, similarly catchy as the opener is Sick to loose. At the end of the song the accelerator pedal is again pressed correctly, awesome finale!
Hiding from tomorrow has brilliant guitar work.
As a final track we get a thrash anthem, Follow the Firm. Indescribable hardness; the song pounding in my ears! The fastest song on the disc is also the best;
This CD is matching the band name!
—————————————————————————
galloping riffs, fast drumming along the concise bass guitar, and vocals that bringing out a Chris Boltendahl feel. They play nothing too complex; everything comes in a simple way and with clear evidence of their influences by some great bands. There are five songs in which we can hear a few slow parts… all containing the right punch!
—————————————————————————
DEMOLITION emerges from Austria & play a very good, aggressive style of Thrash Metal music. The music reminds me of the early 90s Metal scene when Thrash & Death Metal were inner twinning. They have a very classic Thrash sound, which I dug a lot! The vocals are done in a mid ranged Thrash style. Fans of old material from OVERKILL, TESTAMENT & FORBIDDEN will dig these guys! 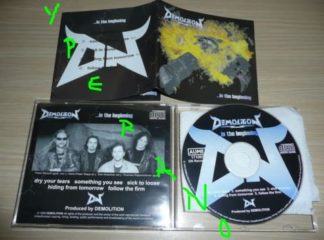