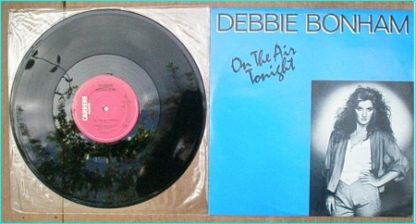 Overlooked!! Contrary to most people opinions of sons-or-daughters-of-famous-musicians -generally spoiled and abysmally untalented- Debbie and the rest of the band exhibit excellent musicianship and songwriting ability. It unfortunate that this is out of print; it worth buying for side A alone.
Since this is out of stock, and becoming very rare to find, if you happen to get lucky and find a used copy…pick it up quick!!!

Deborah Louise Bonham is an English rock and blues vocalist and the sister of John Bonham, the late drummer for the band Led Zeppelin. Born in Redditch, Worcestershire, England, she lived with her father in The Old Hyde farm, Cutnall Green, Worcestershire (the location where John Bonhams fantasy sequence was filmed for The Song Remains the Same). While living there, she started playing and recording music with her nephew Jason Bonham who has played drums on her two most recent studio releases.
When Led Zeppelin was formed Deborah was living on the family’s Old Hyde estate, Deborah and Johns son Jason started playing and recording their own songs. At the age of 17, at Robert Plants house in a nearby village, she recorded her first demos. With some encouragement and advice from mentor Plant, Bonham sent out the songs anonymously and soon landed her first record deal with the major European label Carerre Records in 1985, for whom she recorded the critically acclaimed album For You and the Moon (this 12″ comes off this album). The album reached the top 5 in the NME chart, was DJ Simon Bates record of the week on BBC Radio 1 and sold well in Europe, being voted “Record of the Year” by Musik Mart magazine, in Germany.

Be the first to review “Debbie BONHAM: On The Air Tonight 12″ The daughter of John Bonham, the legendary Led Zeppelin drummer. Check audio” Cancel reply 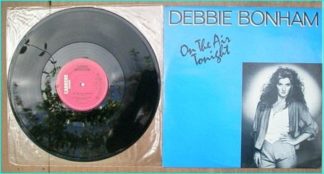 You're viewing: Debbie BONHAM: On The Air Tonight 12″ The daughter of John Bonham, the legendary Led Zeppelin drummer. Check audio € 5.32
Add to basket