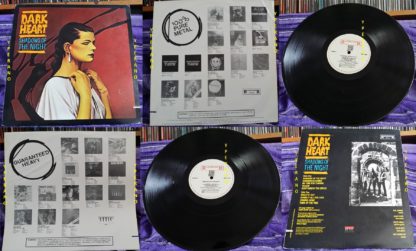 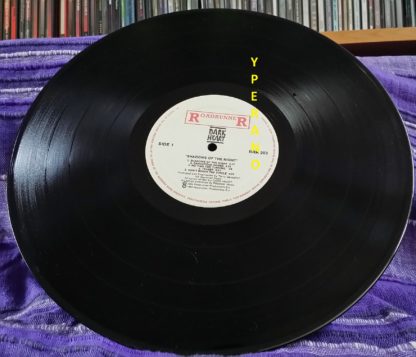 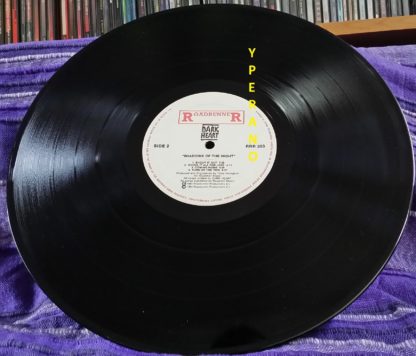 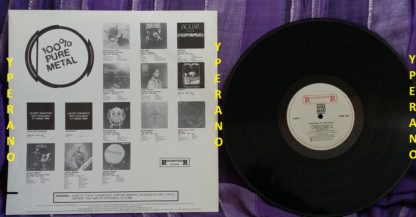 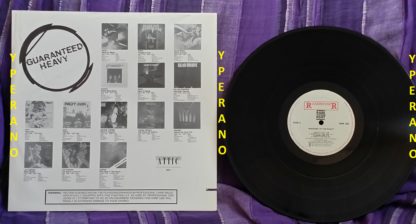 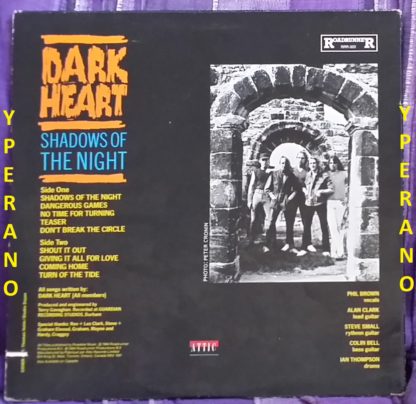 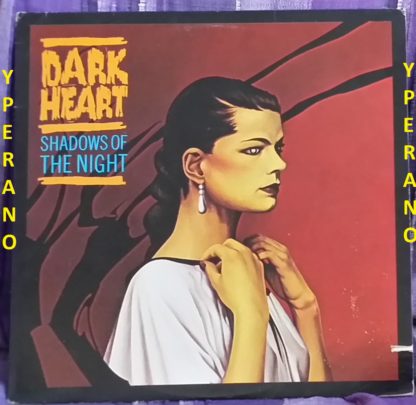 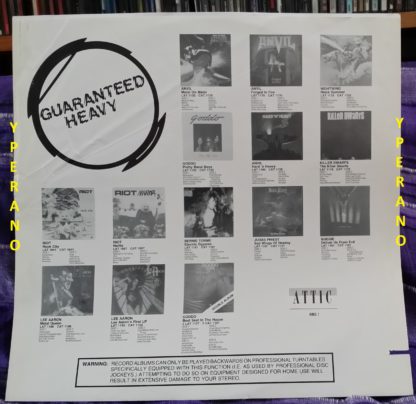 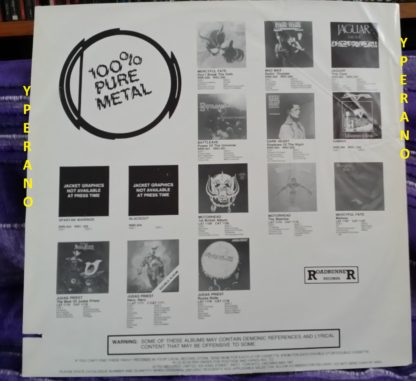 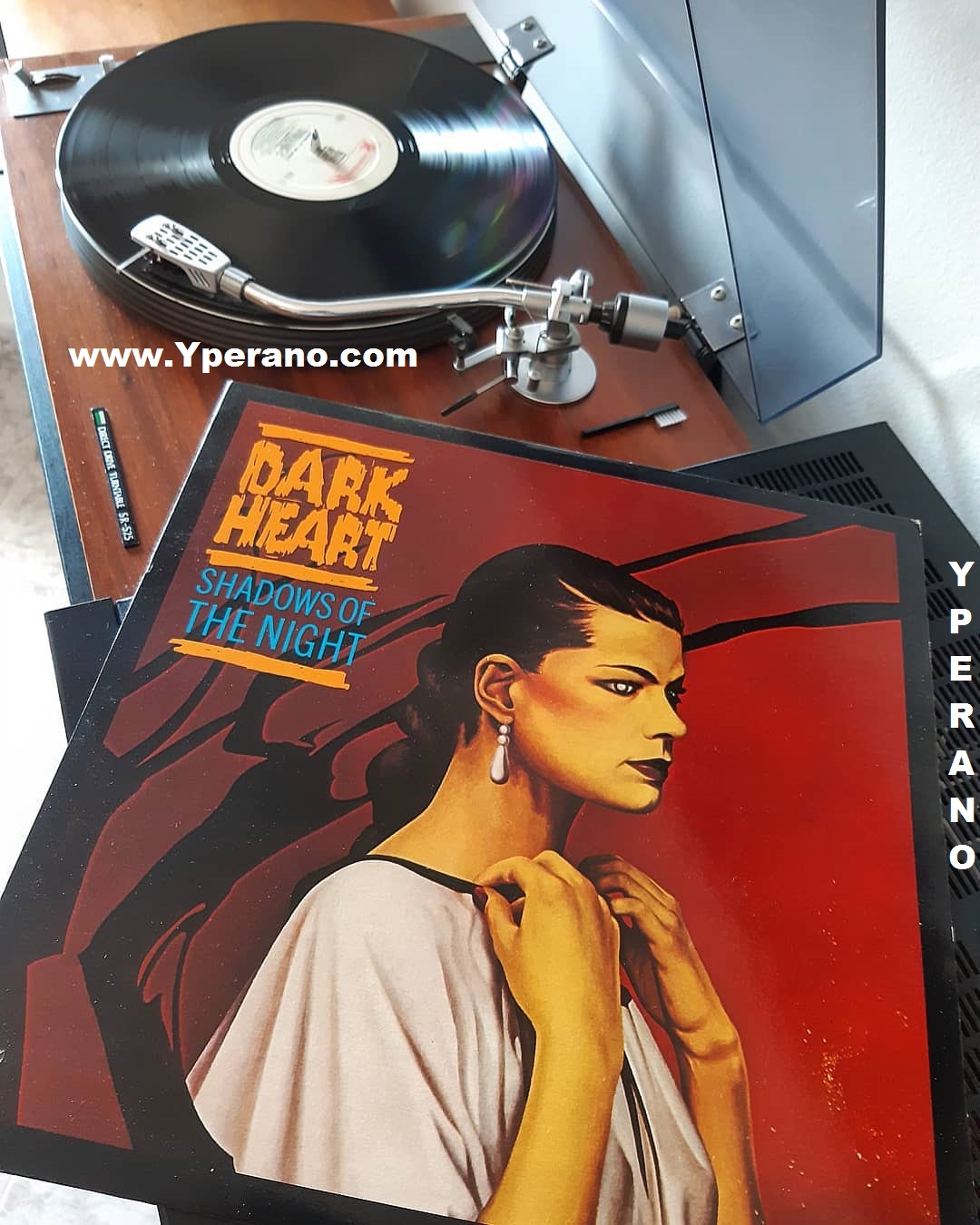 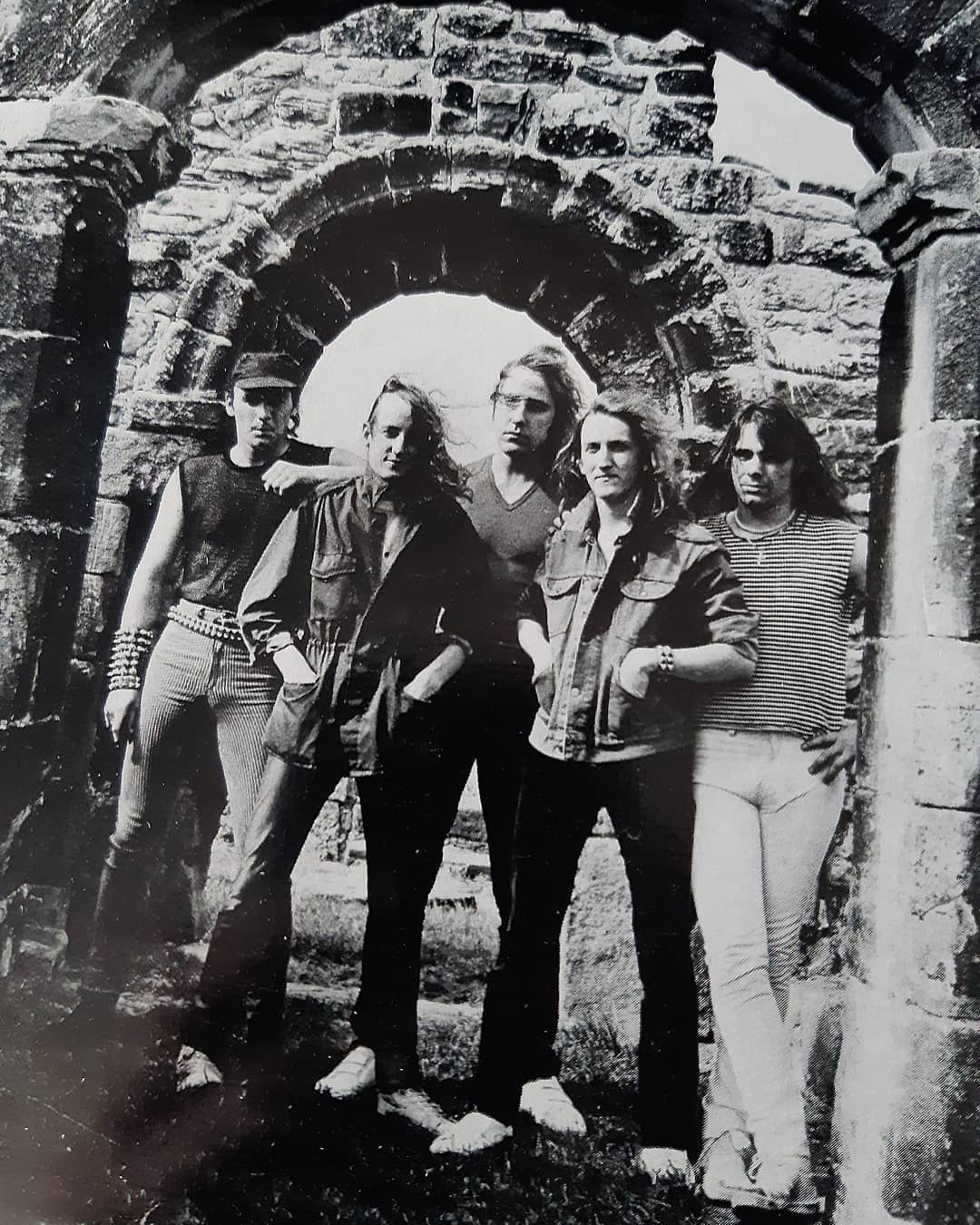 Being a collector of heavy metal you can pretty much put records in three categories. First you have your easily accessible albums that are pretty well known and receive lots of mainstream attention. Secondly you have a whole bunch of lost relics that seemed to receive little recognition in their time, but now seem to be quite well known and sought after by indulgers of the obscure. The third category is more of a grey spot or, as I like to call it the twilight zone (Not that I’ve ever referred to it that way before writing this). The twilight zone is a place where few visit but many records live. A place where “category one” listeners have trouble finding, not being hungry enough to explore the dark woods, contempt with the sunny fields of your Judas Priest’s and Iron Maiden’s. “Category two” listeners being more likely to know the records in the twilight zone still often pass them unlistened in favour for obscure favourites such as for example Gotham City and Stormqueen. Dark Heart from Northallerton are one of these overlooked yet easily accessible bands.

Dark Heart are said to have evolved from Tokyo Rose who featured four tracks on Guardian Record’s 1983 compilation album entitled Pure Overkill. The line-ups couldn’t have been identical, the vocalist and at least another member or two must have come across in the early months of ’84. Even some of the musical passages in the Tokyo Rose songs sound similar to passages on Shadows of the Night. Take the pre-chorus riff from Lost in the Heat and compare it to main verse/chorus riff from Shout it Out for example.

Shadows of the Night is purely hooks, that’s simply what it’s about and why it’s so great. Every single musical note off this album is constructed in such a catchy no-filler fashion. With the minor exceptions of the strange instrumental blues rock intro to Shout It Out and the semi ballad Turn the Tide, which aren’t bad in their own right, Just different. It’s almost like Dark Heart heard that Diamond Head riff in Helpless from 3:25 and noticed how effective it is to put cool power-chord and bass line progressions under catchy riffs and decided to make a whole album of these riffs and catchy harmonies (Though in actual fact the influence could have come from anywhere). They don’t quite merit the musical competence or experience of Diamond Head. With most of their songs being constructed fairly simplistically and more focused on writing simple hooks rather than the “riffs, riffs, riffs” onslaught of Diamond Head. But it’s that philosophy put into consciously writing these simple yet elegant classics that’s so attractive. Maybe it’s just my amazement that a band can write so many songs on a single 12” piece of vinyl that are consistently so catchy that intrigues. I could almost quote the chorus of any song on this album as being the catchiest. But the standout favourites would probably be the occult flavored Don’t Break the Circle (Much better than the Demon song of the same title), Dangerous Games and the simplistic yet hooky Giving It All For Love.

No excuse not to pick this one up, Even with vinyl collecting making a major come back this can still be obtained online for around £20. After this release most of Dark Heart would fade away with Colin Bell going on to form Charger who would produce in my opinion the best late comer 7” singles for the whole N.W.O.B.H.M. genre. He would later join former Dark Heart members Phil Brown and Steve Small in the “thrashier” Holosade while Alan Clark would struggle on with Dark Heart in a shadowed form of their original glory. Apart from the brilliant Charger Desperadoes single Shadows of the Night is the best legacy any of the band involved would release over their varied careers.

One of the many bands to emerge from the NWOBHM explosion, Dark Heart formed in 1983 out of the ashes of Tokyo Rose. They rather quickly got on track and knocked out an album the next year. This is solid metal driven by gritty guitars and complemented by a good production that helps their style. The album is based around strong hooks and that why it works so well. The songs are easy to get into largely due to the basic song structures. It doesn’t take long to draw comparisons to Diamond Head work from a few years earlier. Dark Heart obviously followed a similar blue print. There not much fancy here, but there doesn’t have to be. The choruses are instantly catchy and Dark Heart waste little in getting into the meat of every track. “”Shadows of the night”” is an album (1984) full of easily accessible material.
This would be the only album for Dark Heart. The band fell apart some time after “”Shadows of the night”” was released. Guitarist Alan Clark did try to form a new version of the band, but that project also fell apart after a short time. Some other members of Dark Heart later ended up in a thrash band called Holosade.
Certainly worth checking out.

A NWOBHM album released just as the movement was in major decline, arguably the “”Last”” year of it. This album often sounds to me like an English Mercyful Fate. Being that Mercyful Fate is my all time favorite band along with Judas Priest, this is a very, very good thing. The record exudes heavy metal. More specifically, Honourable English Metal. For country and king!
When someone says “”Metal””, this album is what I think of. This record is the perfect example of “”Writing A Great Metal Album”” and here why:

-Catchiness.
-Skill.
-Songwriting ability.
-A focus on the MUSIC!!

Recently I have come to a conclusion regarding those qualities. If they’re all there, they equal more than the sum of their parts. Moreover, with this particular record, you’ll notice how light of a touch the instruments have (the lead tone sounds like a Strat through a Blues combo) but yet it is very “”Heavy””. This is a phenomenon through which the aforementioned qualities, if all present, make the album exponentially heavier.

This album has no flaws. The main thing it has going for it is the dramatic, “”classic”” metal aspect that Mercyful Fate employed. In this sense it is done right. Some songs drag on a bit, but usually the length is justified with a new riff or solo anyways. That brings me to my next point – I LOVE SOLOS! Hate to compare it to M.F again, but there you go – the solos are plentiful and nicely executed. The rest of the band is also great, but it hard to notice them when you’re paying attention to the song – they are so well arranged and written!

Recommended Tracks:
-“”Shadows Of The Night””
-“”Dangerous Games””
-“”Don’t Break The Circle”” (different song, but it still reminds me of DEMON!)
-“”Shout It Out””

Wrap-Up
Highly, highly recommended. It is a shame they didn’t put out a follow up record – such is the quandary of the NWOBHM. Every dynamic of classic and melodic heavy metal is explored on this record, and while not intending to smash you in the mouth (by any means) it tells us how to write a heavy record without resorting to that approach. Some songs are a little forgettable, but the rest are so damn catchy, and in some places, progressive. (I couldn’t believe I had forgotten about this amazing record when I pulled it out…) Great for NWOBHM fans especially. 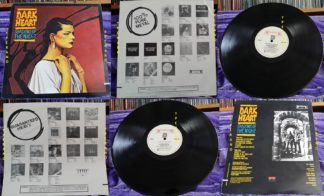