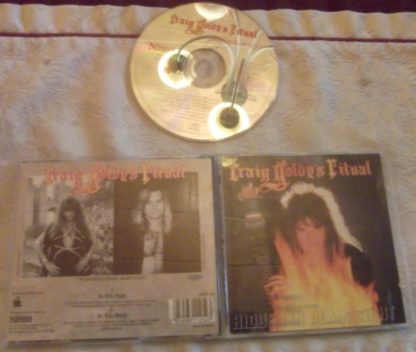 a great Goldy/Eisley collaboration
The first solo album by former (and future) Dio guitarist Craig Goldy when he still had mad skills. Working under the name Craig Goldys Ritual, the album features two vocalists. Mike Stone provides vocals for about half of the tracks, while Goldys ex-Giuffria colleague David Glen Eisley sings on the other half. Eisley has such a powerful voice its no surprise that his tracks far outshine Stones.
The music on Hidden in Plain Sight is not as “metal” as Goldys Dio work, instead coming across as more of a straightforward hard rock (perhaps hair metal) approach very similar to Giuffria and House of Lords. Its the kind of memorable melodic hard rock that the early 1990s were so well known for. Goldy does get a chance to strut his stuff a bit, especially on the instrumental title track and Rain Fall.

Craig Goldy is most known as the guitarist who took over the guitar spot in Dio after Campbell split. “Hidden in Plain Sight” is his first solo album and features many guest artists including David Glen Eisley who use to be in House of Lords with Craig. Goldys Ritual is glossy, flashy melodic heavy metal. “Hidden in Plain Slight” is slightly heavier House of Lords although not as heavy or dynamic as Dio. First five songs with David Glen Eisley behind the mic. His smooth voice fits the music perfectly. Vocalist Mike Stone does a commendable job on the remaining tracks as well. Golds solos are certainly a highlight on this disc. Just check out the shredding “Hidden in Plain Sight” or the guitar solo that end out “Over and Over”.

5.0 out of 5 stars Solid Dio type Metal!!!
This is the only CD by Craig Goldy that is any good (everything else is pretty shitty), it is melodic heavy metal, with great guitar work. The other Craig Goldy CD’s are shitty alternative/grunge type music, devoid of any neo classical type shredding. This CD is solid metal, it sounds a bit like Dream Evil Dio stuff, more in the vein of the song “Night People”, with excellent melodic shred type leads, and excellent vocals.

5.0 out of 5 starsFormer “Giuffria” members Graig Godly and David Glen Eisley join forces once more!!
“Hidden in plain sight” is the debut album by `Craig Goldy’s Ritual’ released in 1991. Having risen to fame as the guitarist of melodic rock band “Giuffria” and heavy metal legend “Dio”, Craig Goldy put forward his solo outfit with “Hidden in Plain Sight”.

Fronting the line up is none other than “Giuffria” lead singer David Glen Eisley. With Goldy and Eisley reuniting one could not expect anything other than a melodic hard rock album in the style of “Giuffria” and “House of Lords”. And that is exactly what the `Ritual’ delivers-an album that has the harmonic quality and voice to reference directly `Giuffria’ while also demonstrating the musical twists and turns that defined the style of “House of Lords”. Beyond Eisley’s contribution an additional element bringing `Ritual’s sound closer to the bands mentioned above is the keyboard performance of Doug Allen adding substantial themes and harmonies (as opposed to simply complementing song-structures).

Overall “Hidden in plai sight” features a fair amount of memorable songs such as “Eye for an Eye”, “Hard Times comin”, “Over and Over” and “Forever More” most of which could have served as material for a “Giuffria”/”House of Lords” album. If you are a fan of the bands mentioned above, Craig Goldy’s Ritual is more than recommended.

5.0 out of 5 stars great Goldy/Eisley collaboration
Released in 1991, Hidden in Plain Sight was the first solo album by former (and future) Dio guitarist Craig Goldy. Working under the name Craig Goldy’s Ritual, the album features two vocalists. Mike Stone provides vocals for about half of the tracks, while Goldy’s ex-Giuffria colleague David Glen Eisley sings on the other half. Eisley has such a powerful voice it’s no surprise that his tracks far outshine Stone’s.

5.0 out of 5 stars I’ve always respected the Craig Goldy name,
It’s a name you can trust for solid guitar work. Dependable and capable of pretty much all the facets required of a hard rock/metal guitarist. The music is solid and serviceable. The album has pretty much all the bases covered in terms of having competent (and not lavender boy) vocals and goes up and down speeds -ie it has rockers and ballads and some instrumentals to remind you this is a guitarists band and there is somewhat of a project feel. 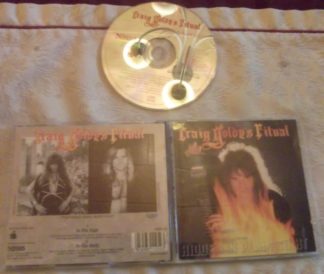