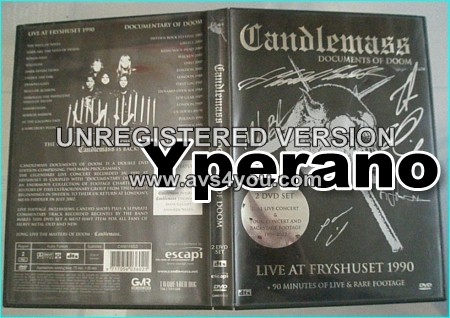 Two live performances highlight this double DVD documenting Candlemass’ return as the masters of doom. Contained herein is their legendary 1990 concert recorded in Fryshuset coupled with “”Documentary or Doom”” an enormous collection of footage charting their history from inception to their return at London’s Mean Fiddler in July 2002.

Essential for Candlemass Fans, By Lord Kittenslayer
This is a double DVD set. The first DVD contains the live show recorded in Sweden in 1990 – the same one you can hear on the “”Candlemass Live”” CD. The tracklisting is identical to the live CD, except the DVD also contains “”The Bells of Acheron””.
The audio quality on this DVD is excellent, and the picture is very good. This concert was professionally filmed from various angles with good lighting and editing. The only problems with the picture are occasional instances of minor warping — however, this did not really detract from the experience, and on a normal-size TV you might not even notice it. These minor flaws are probably due to the film not being properly maintained for the previous 12 years. As the story goes, the film was stored away in a vault for the entire period without ever being released.
If you are a big Candlemass fan, the second DVD is perhaps even more of a treat. The first half of this DVD covers their 2002 reunion tour, and you’re along for the ride. There is concert and backstage footage from 6 separate shows during this segment. The picture and sound of this segment is also high-quality.
Midway through the DVD, you are transported in time back to 1988, and what follows is more concert and backstage footage spanning 1988-91. The quality here is hit-and-miss, but who cares?
You also get a biography, discography, bonus interviews and a well-made image gallery set to the tune of “”Into the Unfathomed Tower””. And finally, the 2nd DVD contains a full-length commentary track by several of the band members. Although I found parts of it to be hard to understand (due to low sound levels), it contains enough interesting information and humorous insights to make the whole thing worth watching all over again.

5.0 out of 5 stars Excellent doom DVD, Jan 7 2004
By David K. Barrett (Seattle, WA)
This is a two disc DVD with a lot to offer. The first DVD is the 1990 concert that you may remember. The sound is perfect, and the performances are top notch. Occasionally the picture is not as great as you like, but that is just nitpicking. It is a fine DVD. What more do you need? How about Venom’s 1990 show…

The second DVD is mostly the Messiah fronted Candlemass touring through Europe in 2002. There are many more songs played on disc 2, most of them with great clarity. There are some great cameos from Warrel Dane (Nevermore) and Rob Halford (PRIEST!!) as well. The backstage stuff is quite funny too. The second DVD also has some great footage of the band in the late 80s and early 90s. A true treat in the form of “”Night of the Witch”” is on the second DVD. That song is basically the “”Dying Illusion”” from the Vikstrom fronted Chapter VI with Messiah singing. I WISH that Candlemass would rerecord that tune (Chapter VI being far and away my fave Candlemass album)!

5.0 out of 5 stars Godly, godly performance- in a legion of their own!, Oct 10 2003
By David J Newman “”Party Host, Writer, Guitarist… (West Hartford, CT United States)
For fans of doom and negative riffing, Candlemass just crushes! The first DVD is live in Stolkholm; you may already have the live CD on Metal Blade Records…the visuals just put the whole concert in perspective…imagine a really souped-up Black Sabbath- tons heavier and better vox! This is Candlemass at their best. I cannot say anything bad about this double-disc phenomenom- apparently some bands really do care about the fans! The guys in the band are not actual satanists- they believe in metal…and it shows! The second disc is a melange of clips from other C-mass shows, old and reunion tours. Messiah Marcolin is one of the top metal vocalists in the world! Unbelievable range and timbre in his voice- this guy commands attention at all times! The rest of the bands kicks major, major bunghole- poseurs beware! Candlemass know doom-dancing and they are gonna dance all over you face! (thanks, Gene)-David J Newman 2003 ” 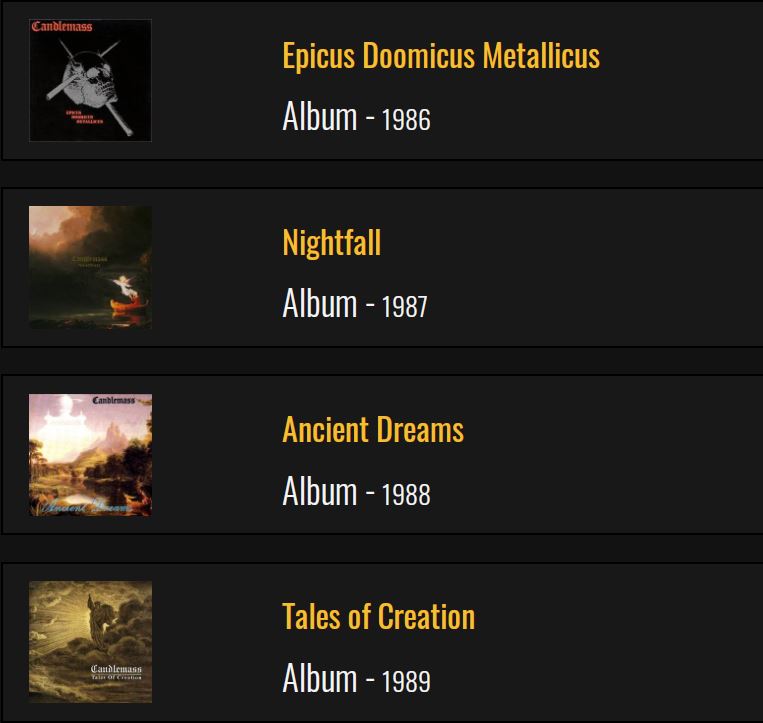 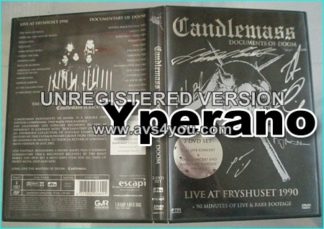