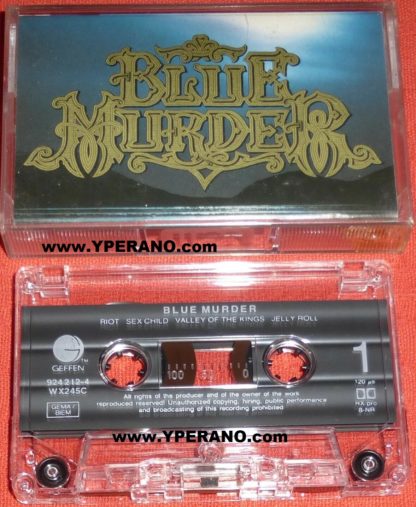 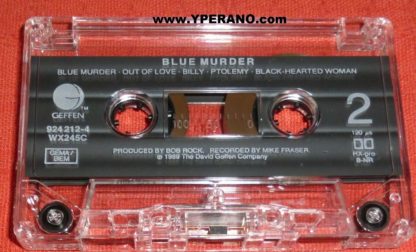 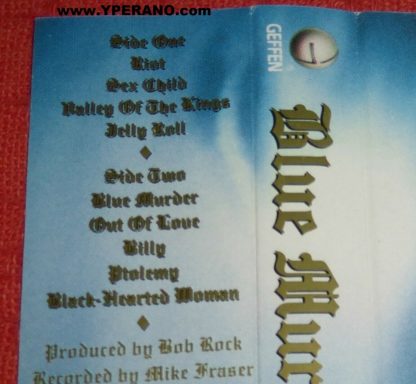 Blue Murder were an English hard rock band, founded by ex-Whitesnake, Tygers of Pan Tang and Thin Lizzy guitarist John Sykes. Not only is John Sykes an awesome guitarist, he’s a great singer too. 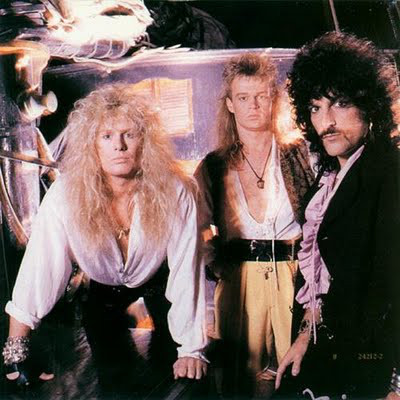 UK issue, made in Germany, from 1989 on Geffen.  The cassette and inlay are both in EX condition. 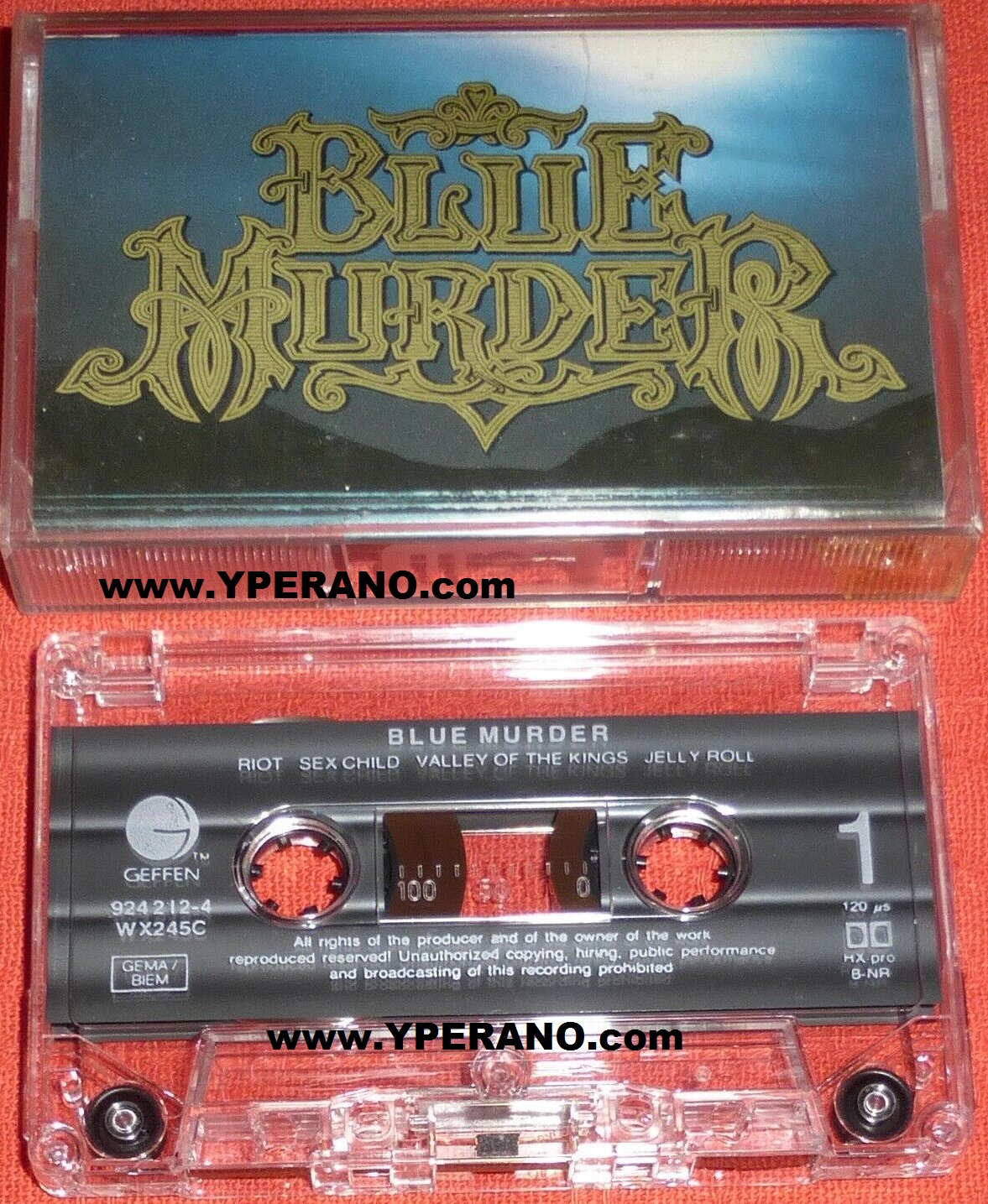 5.0 out of 5 stars Essential John Sykes,
If anyone is familiar with John Sykes and his work with the Tygers of Pang Tang, Thin Lizzy and Whitesnake, this IS essential listening …
===========================================
5.0 out of 5 stars Very good hard rock with some metal moments,
This is a “”callback”” to the old hard rock with some elements of doomy blues. John Sykes’s guitar solos are really outstanding – the balancing between the hard rock, metal and blues is quite difficult, but he fulfils this task perfectly. Songs like “”Valley of the Kings””, “”Out of Love”” and “”Ptolemy”” demonstrate it clearly. Buy this, enjoy a wonderful mixture of styles!
===========================================
5.0 out of 5 stars One of the great lost metal groups,
After playing with Tygers of Pan Tang and Thin Lizzy, guitar virtuoso John Sykes got the gig of a lifetime. In 1984 he joined a reformed Whitesnake line-up, a position he originally declined. John did some guitar work on Whitesnake’s Slide It In album in 1984. Impressed by his work, Whitesnake made Sykes a full member and in 1987 released their self-titled album. The album prominently displayed Sykes masterful guitar work on such tracks as “”Still of the Night”” and the re-worked “”Here I Go Again””. Whitesnake found themselves with their most successful album to date. There are conflicting reports as to Sykes departure from the group, he either left or was fired depending on what you read. However, Geffen records were certainly a fan of John’s work in Whitesnake. So much so they offered him a record contract of his own. With the help of Tony Franklin and Carmine Appice, Blue Murder was born in 1989.
Sykes performs double duty on their self-titled debut, handling guitars and vocals. Both are pretty smooth on the albums opening track “”Riot””. You can take the man out of Whitesnake but you can’t take the Whitesnake out of the man. That’s evident on “”Sex Child””. Sykes parallels the work he did on “”Slide it In””. There’s no sexual innuendo or metaphor here, Blue Murder cums right out it says it (that’s not a misspelling!). Sex child / we’re gonna slip and slide / I’m gonna come inside / girl. “”Valley of the Kings”” is an eight minute epic that displays all the member’s strengths. Appice sets the pace with a pounding drum beat and Franklin plays in sync with Sykes guitar work. Sykes and company throw in a couple of blues-influenced tracks, among them is the acoustic lead “”Jelly Roll””. “”Ptolemy”” is a nice blend of blues & metal. “”Out of Love”” is the group obligatory power ballad. Blue Murder’s debut album wouldn’t be complete without an eighties metal staple. Nope, it’s not a song about gypsies, it a song named after the group. Blue Murder is the best track on the album. It has that perfect metal sound which defined that era.

THE ALBUM: (1989) 9 songs clocking in at approximately 52 minutes. Included with the disc is a 10-page booklet containing song titles/credits/times, song lyrics, 1 band photo, and thank you’s.

COMMENTS: If there ever was an underrated band that never reached their much deserved stardom, it was Blue Murder. Three incredible musicians forming a “”super-group”” – John Sykes (formerly of Streetfighter, Tygers Of Pan Tang, Badlands/UK, Thin Lizzy and Whitesnake), Tony Franklin (The Firm, Whitesnake, Don Dokken, Derek Sherinian… *Franklin is/was credited with the introduction of the fretless bass to the world of rock/metal), and Carmine Appice (Rod Stewart, Stanley Clark, Ozzy, Ted Nugent, Vanilla Fudge, King Cobra). England’s John Sykes is an amazing guitarist – and he shreds with the best of them. His rhythm guitar work, as well as his solos are simply amazing here. Franklin is an innovative bassist – and his playing here is perhaps the most intriguing part of this album. Appice has always been a very heavy drummer (minus his days of wearing sailor outfits with Rod Stewart’s band). “”Jelly Roll”” was the biggest hit to come from this album. “”Riot”” and “”Blue Murder”” were smaller hits also making it to the FM-airwaves briefly. As good as these tracks were, the other deep album cuts provided a full rock experience (no filler)… with “”Valley Of The Kings”” and “”Billy”” being my favorites. This disc may be hard to find, but it’s worth the search. This is classic 80’s hard rock at it’s finest (5 stars). 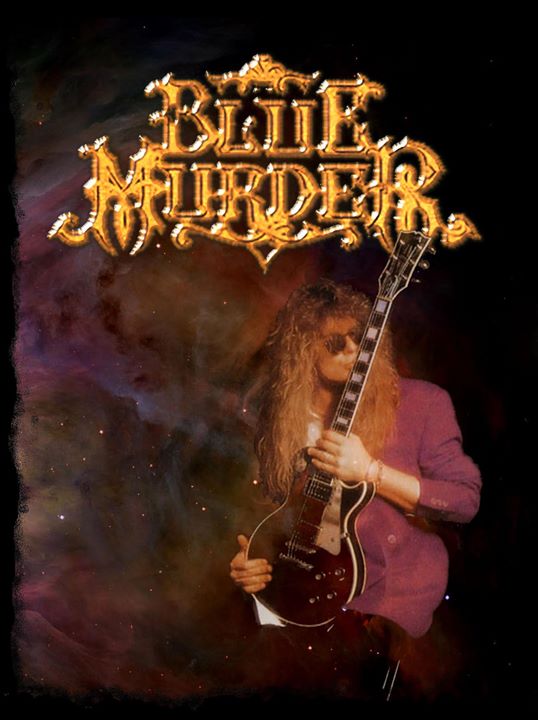 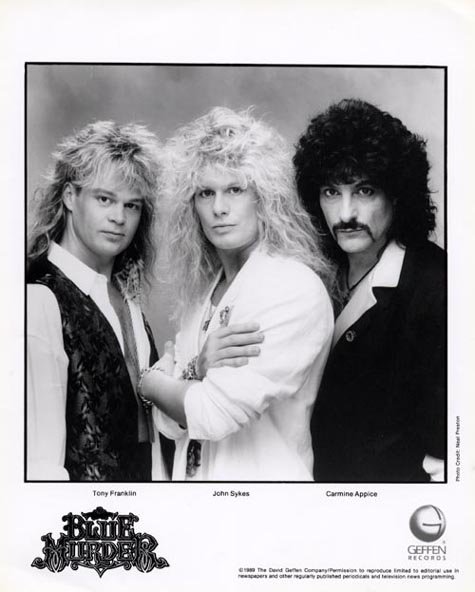 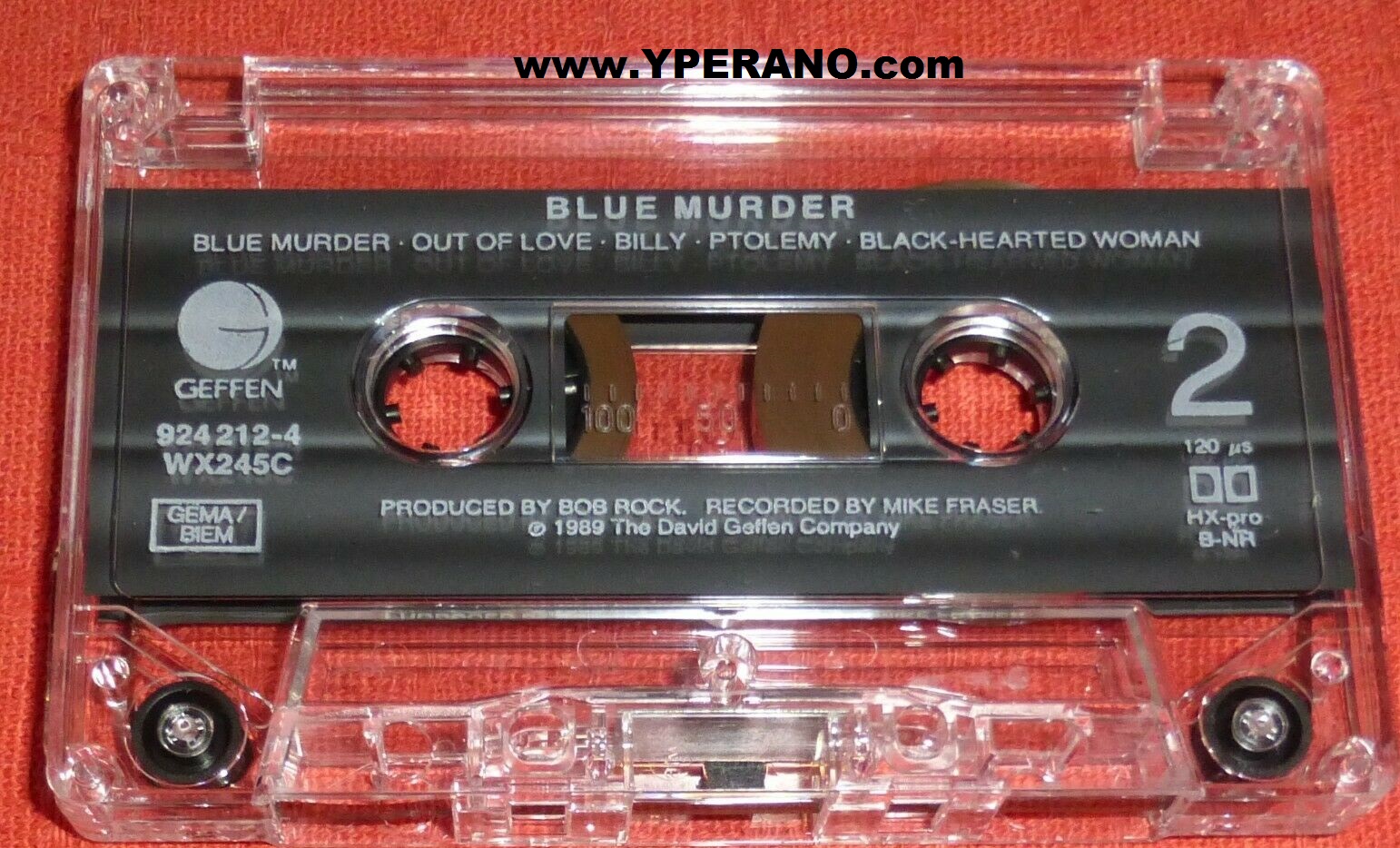 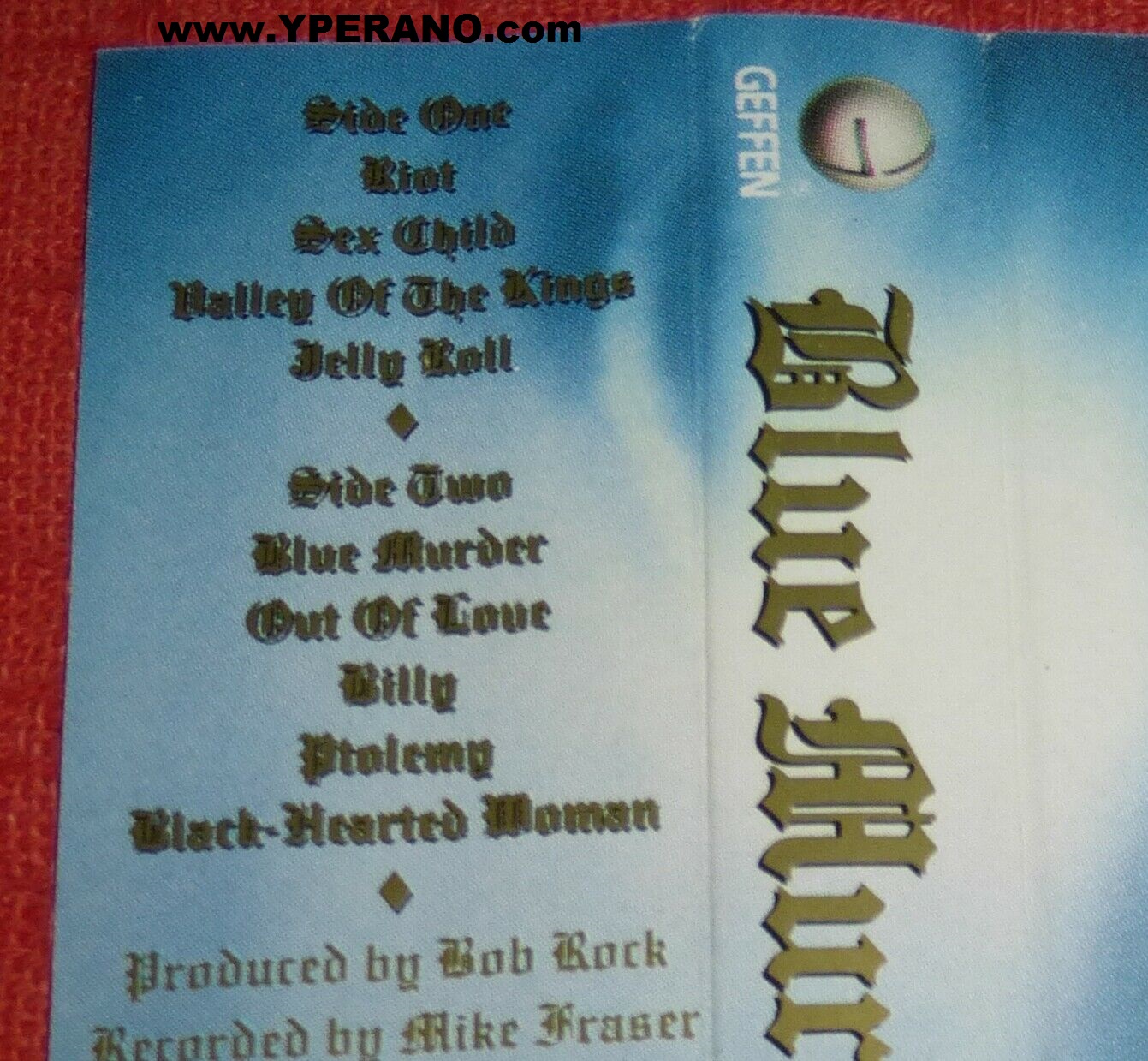