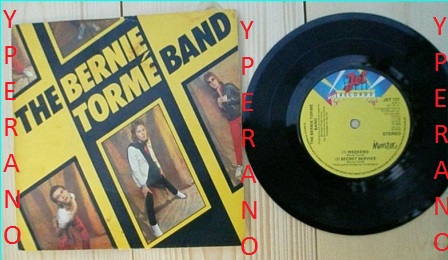 This man was amazing. He only had two days to pretty much get the whole set complete, he did a great job. He added his own licks to Flying High again, and Mr. Crowley, the recording sounds incredible. He deserves tons of credit !

Bernie Torme played seven shows with Ozzy Osbourne over a 10-day stint with the band, then left, to be regarded as a sell-out / cash-grabber. The opposite is true of this amazing Irish guitarist, who considers this LP as one of his favourites. Oh YES!!!

This melodic Hard rock punk rocker is the first song of the same titled ep and is dedicated to the best time of the week!:

Metal/hard rock guitarist most famous for his stint in Ian Gillan’s band from 1979- 1981, but thats just 2 and a half years in a very long CV.
Bernie began playing in his native Dublin most notably with a band called The Urge in 1974. He crossed paths with the early Boomtown Rats in this period. In 1976 he moved to London and formed The Bernie Torme Band, who were inspired by punk rock playing the same venues as many of the original punk bands and appearing on the Live At The Vortex compilation. They toured with the Boomtown Rats and supported bands like The Boys, Bethnal, Generation X and most significantly Gillan, who were soon to be in need of a guitarist. They were signed by Jet Records and released a couple of singles but basically the label did little to promote the band and they split in 1979 due to lack of progress.

Bernie joined Gillan for three albums (1979-81) and then Atomic Rooster for one (“Headline News” in 1981) and then toured with Ozzy Osbourne in April-May 1981, filling in for the recently deceased Randy Rhoads.
He recorded his debut solo album towards the end of his time with Gillan in early 1981 and then recorded as Electric Gypsies (1982-84) and Torme (1985-87) as well as under his own name.