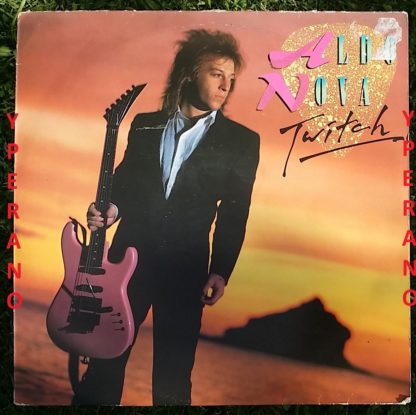 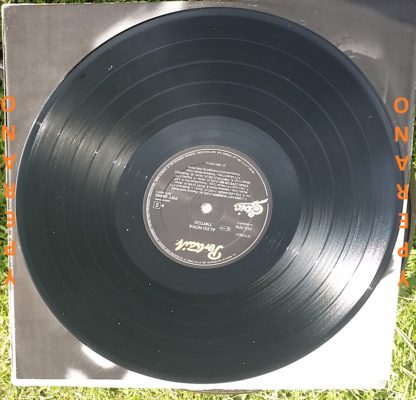 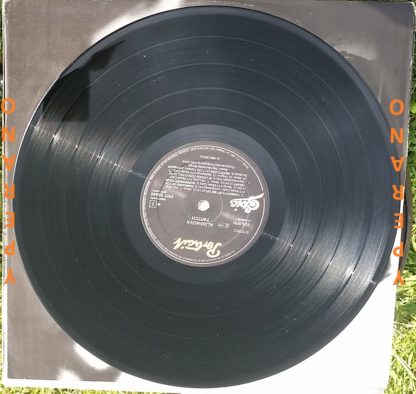 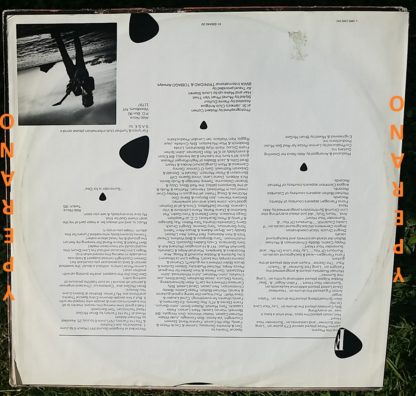 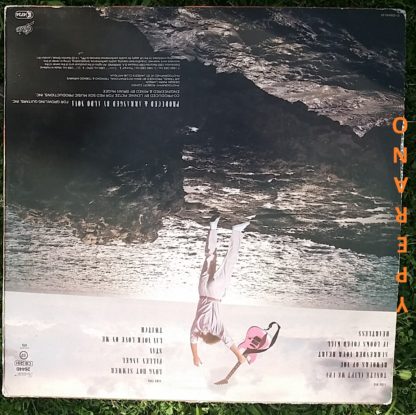 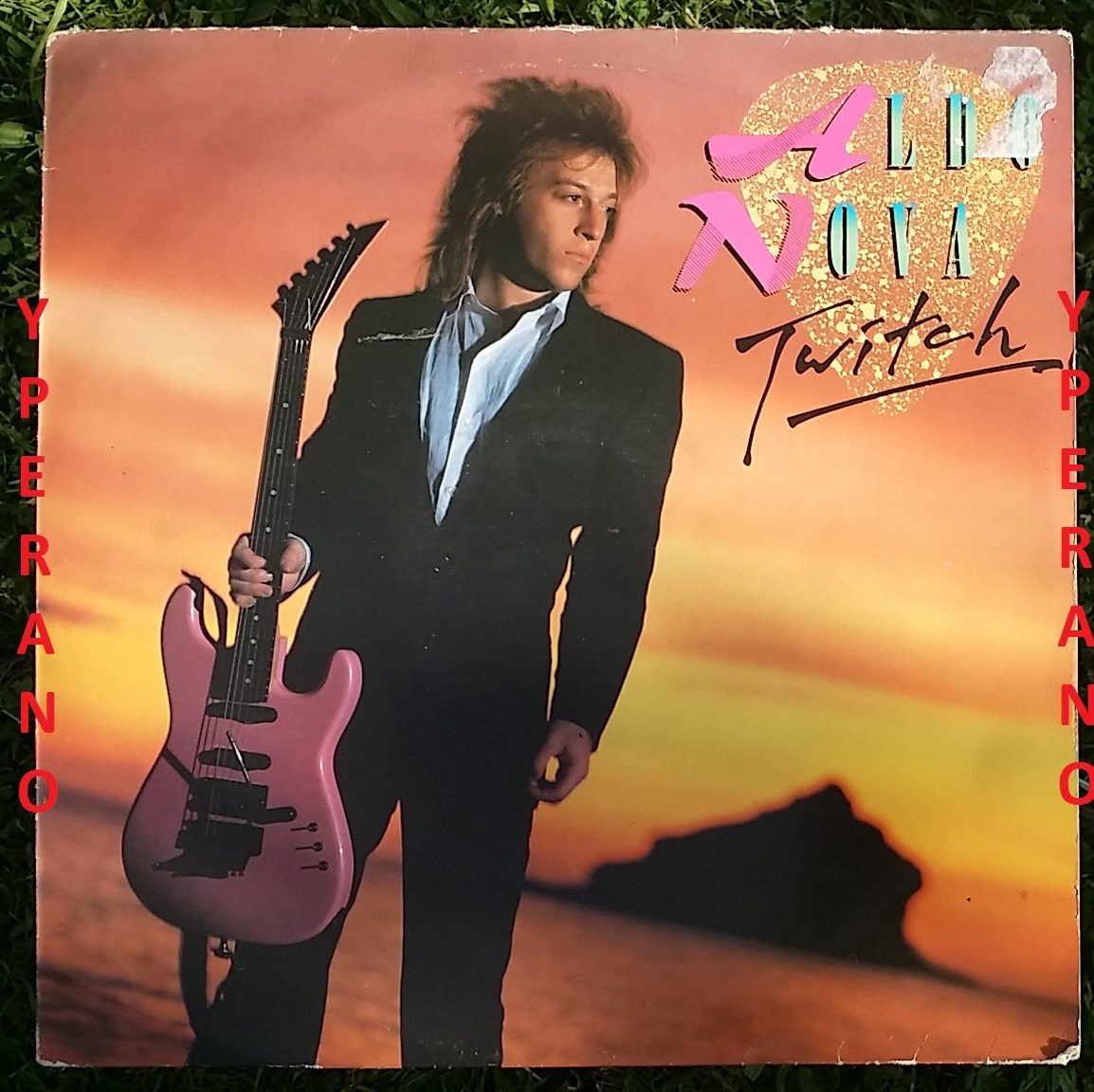 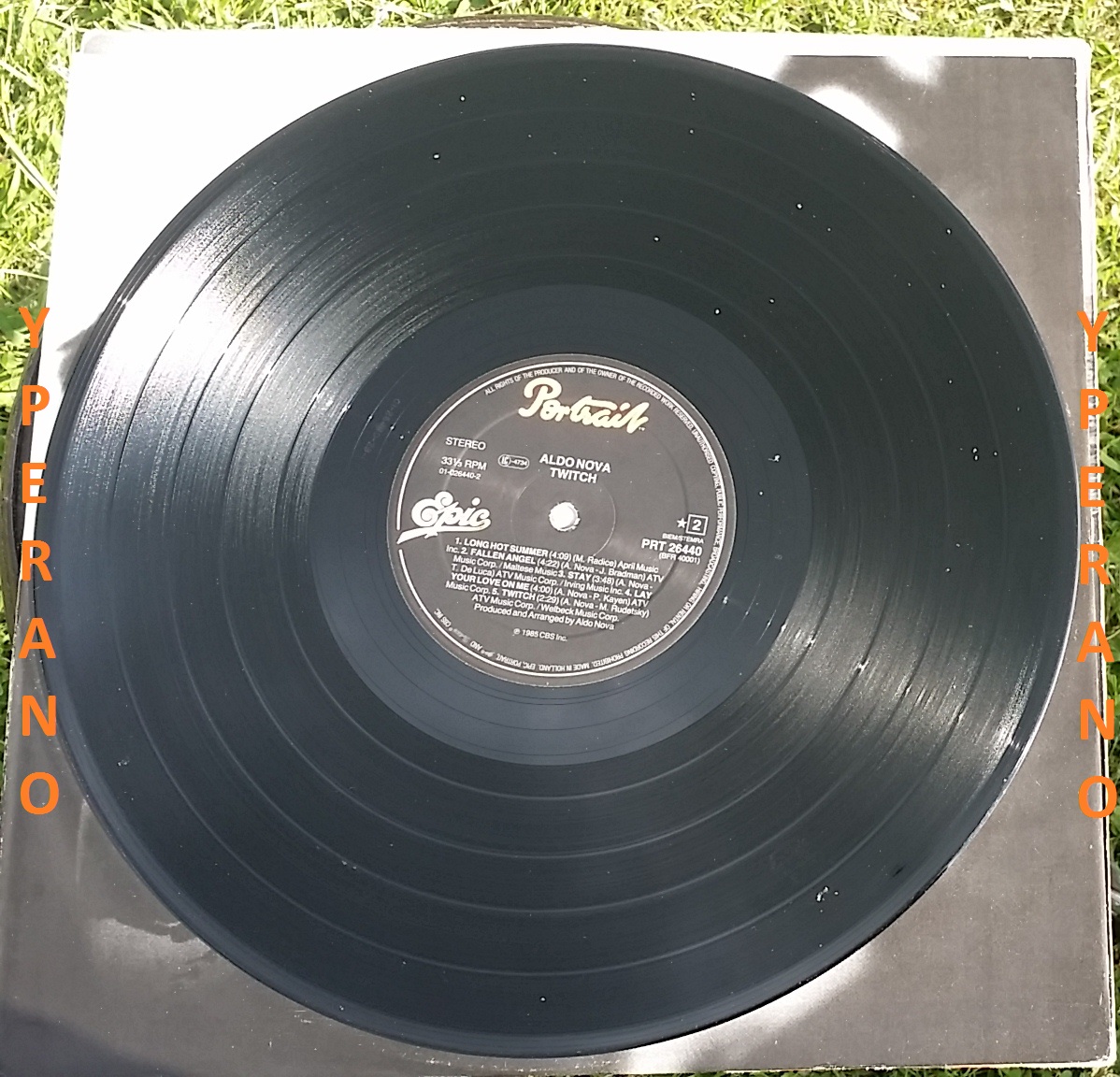 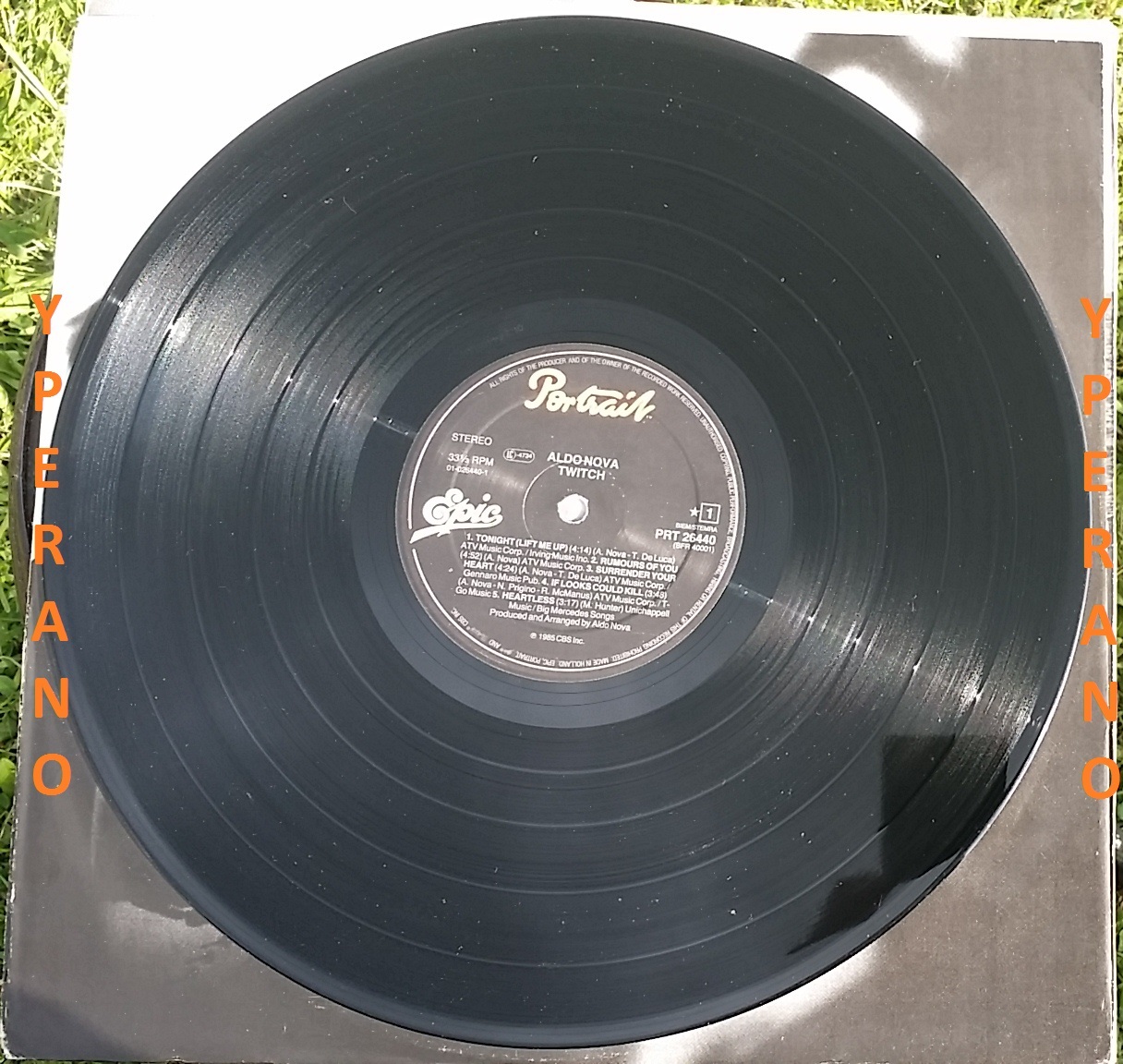 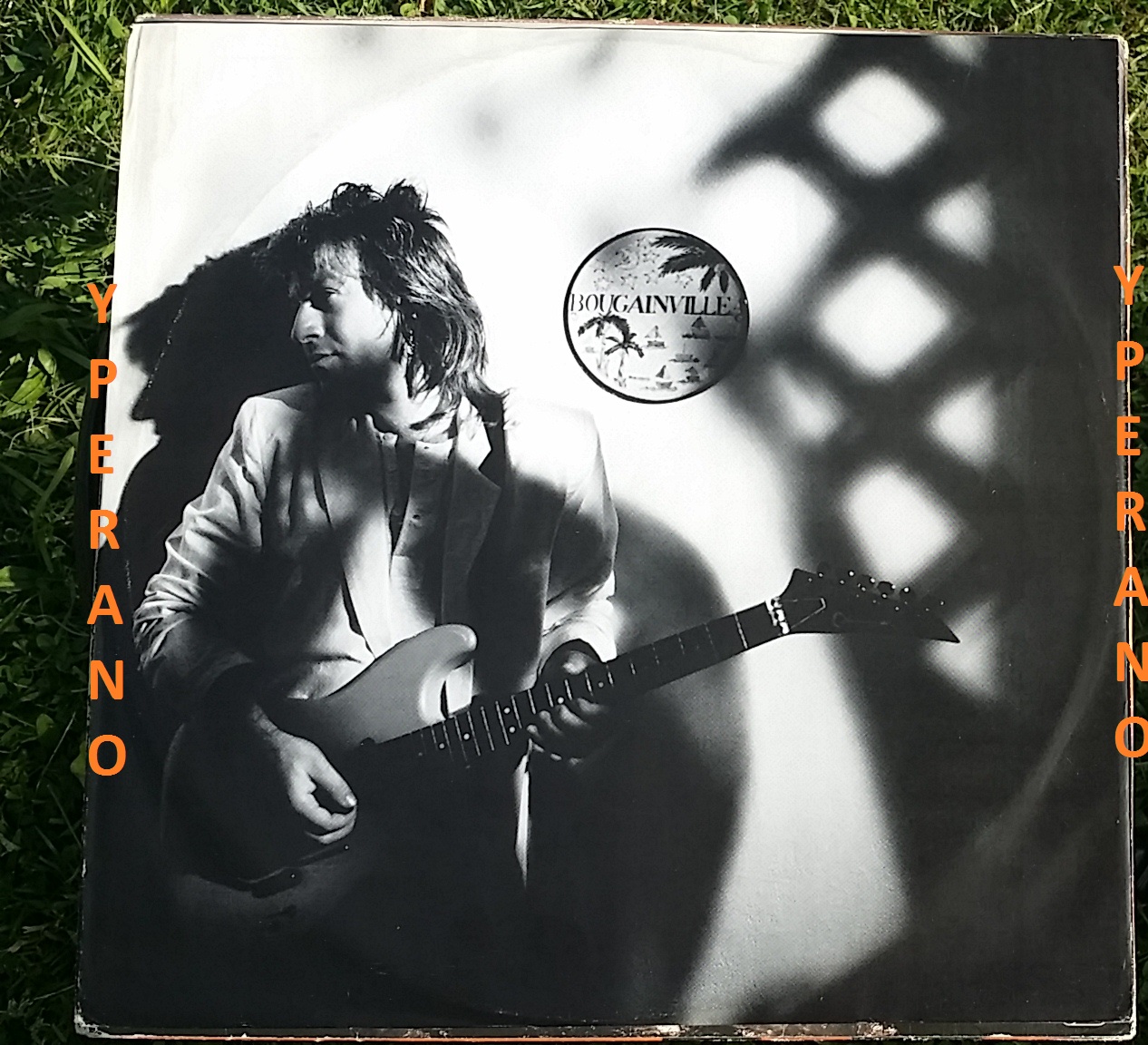 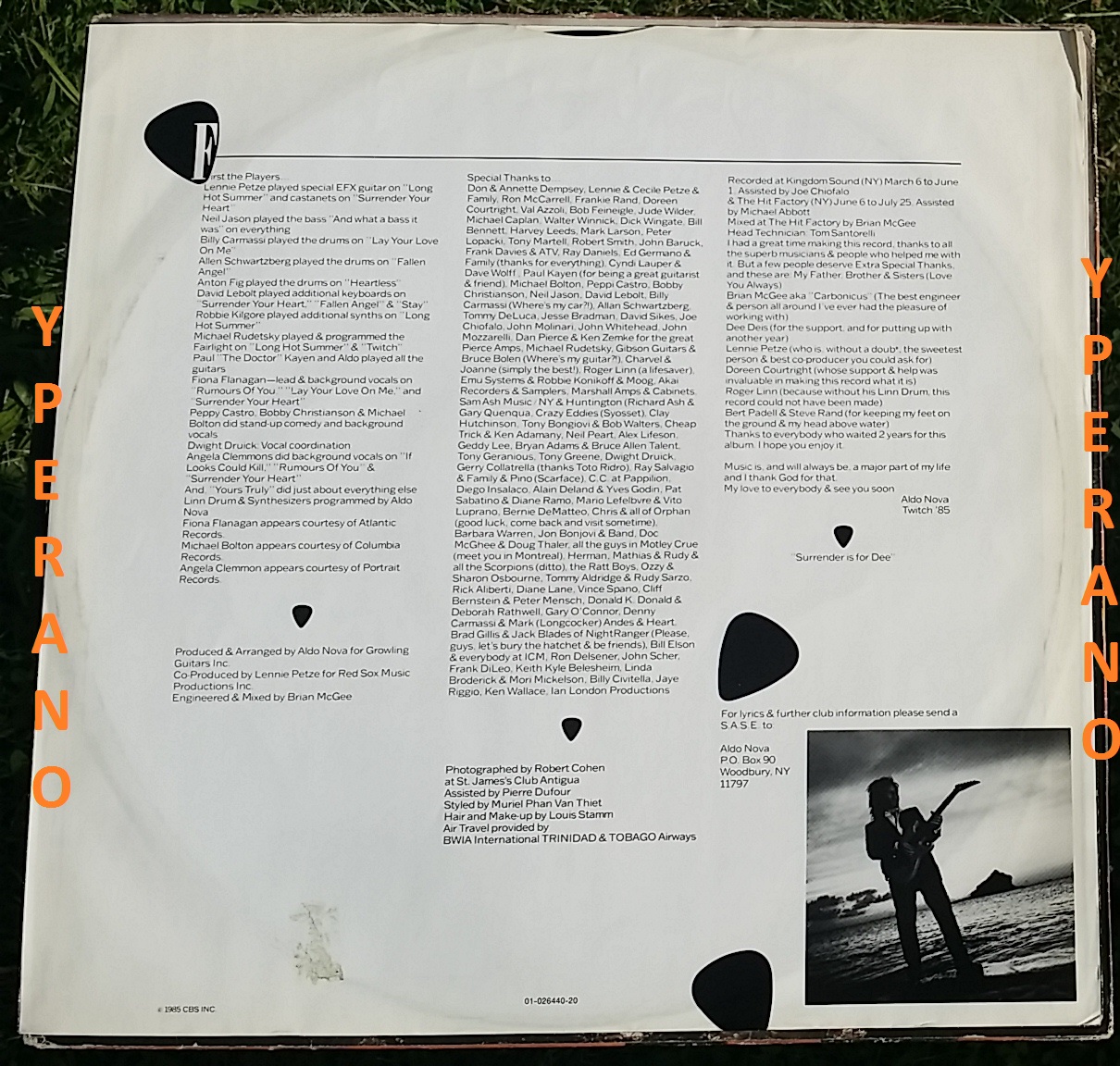 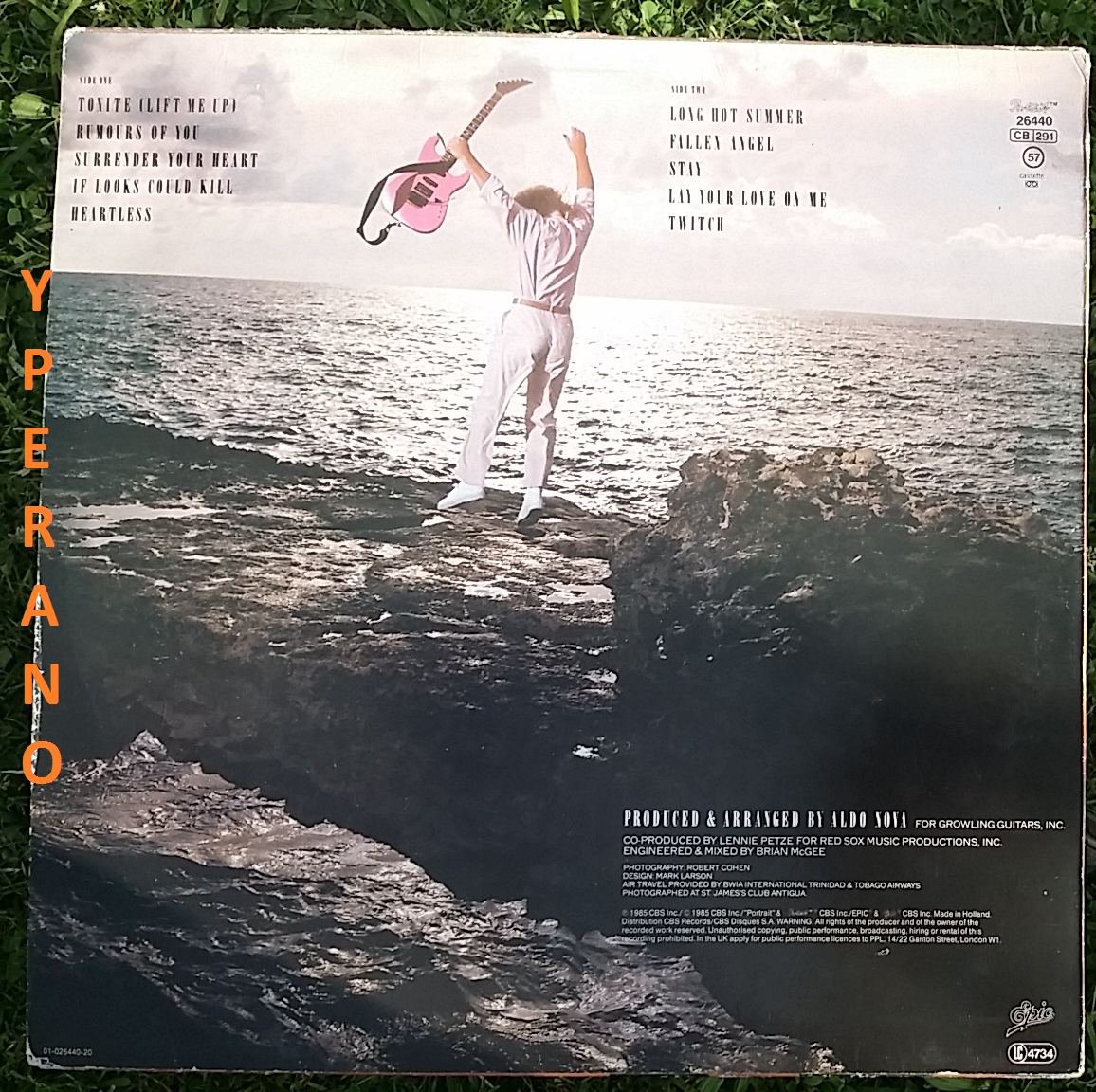 Aldo Nova helped create 1980s pop-metal with his stunning self-titled 1982 debut. Driven by the hit single “Fantasy,” Aldo Nova sold two million copies. The follow-up, 1983s Subject: Aldo Nova, was a departure in that it was a loose concept album. It was meticulously crafted, yet adventurous. Portrait Records brass didn’t like it and didn’t promote it to Novas satisfaction. And it only sold 500,000 copies. This led to a problem with 1985s Twitch. In a 1991 interview, Nova said the disappointing commercial performance of Subject: Aldo Nova caused his record company to force him to use outside songwriters and devise a slicker, softer, more keyboard-heavy sound. This ultimatum angered and disappointed Nova, who is something of a one-man band as a songwriter, arranger, producer, guitarist, and keyboardist. Keyboards were integral to Novas early sound, but he could also fire off some meaty guitar riffs and solos. Nova said he hated everything about the Twitch experience, but we get songs like the soaring rocker “Tonite (Lift Me Up)”, “Rumours of You” a mid-tempo power ballad + “Heartless” that gives Nova a chance to rip on the guitar a bit. “Long Hot Summer” is pop-metal with extra synthesizer polish. Nova finally recreates the energy of his first two albums on “Fallen Angel.” The frantic instrumental “Twitch” is the best track, and it perfectly illustrates Novas production wizardry. Twitch flopped completely. It didn’t even chart. Nova responded by going into self-imposed exile and fighting to be released from Portrait. In 1991 he re-emerged with Blood on the Bricks on Jon Bon Jovis Jambco label.

5.0 out of 5 stars Novas greatest work to date, A
Twitch (1985). Aldo Novas third studio album.
Back in 1982, a Canadian rock musician who goes by the name Aldo Nova, showed up on the music scene with a single popular hit ‘Fantasy’. This anthem was hailed by many to be a classic radio rock staple and the future showed commercial promise for the lone hard rocker. Unfortunately, this was not to be. The debut album (1982) failed to really launch Novas career, and so he disappeared into obscurity in the eyes of the world. However, under the radar, Nova continued to make music with his semi-prog album, Subject(1983). He did receive some help by a better known rock artist and best friend Jon Bon Jovi in many areas of album production. After two fairly hard rock albums, he decided to hire several session musicians and their third outing would take on more of a lighter approach.

Twitch(1985) took two years for Nova to make, but the longer time in the studio paid off with perhaps his strongest set of songs hes ever made. Instead of the faster, pompous hard rock jaunts found on previous albums, Twitch concentrates on a pop/rock melodic delivery both vocally and instrumentally, through the use of guitar, keyboards, and guest female vocals in various songs.

‘Tonight (Lift Me Up)’ and ‘Rumours Of You’ both offer the perfect touching, mellow-paced introduction to the ambient mood of Twitch. Following it is the excellent ballad surrender Your Heart’. From here, Twitch brings back the edgier element of earlier albums with the rockers ‘If Looks Could Kill’ and ‘Heartless’. It calms down again with the optimistic track ‘Long Hot Summer’. ‘Fallen Angel’ is my personal favorite track because it combines the faster harder pace of Novas earlier work with an ethereal melodic soundscape, making it one of the best songs of his career. stay’ is another good ballad that follows. The only track I thought seemed like filler was ‘Lay Your Love On Me’ because it lacked the emotional impact of other songs. Topping off the album is the instrumental title track which, although a bit generic, has some good guitar riffs towards the end.

Twitch, even though never heard by the general public mass majority, is a phenomenal collection of punchy rockers and beautiful ballads that could please most anybody. Given the chance, these songs could have contended with the likes of Bon Jovi, Whitesnake, and Hysteria era Def Leppard. 5 stars for solid musicianship, production, and musical execution by Nova and the various session-artists. If you like 80s melodic pop/hard rock and come in with an open mind, you will not be disappointed. This masterpiece has been hiding in the shadows for far too long. Its about time that someone gave it a spin. HIGHLY RECOMMENDED.

5.0 out of 5 stars As good as ’80s AOR gets!,
Originally released in 1985, Twitch was the third album from Canadian singer/guitarist/keyboardist Aldo Nova. Nova is best known for his self-titled 1982 debut (and the hit single “Fantasy”), but the overlooked Twitch may just be his best work overall.

It says something that Nova, who was often brought in to help produce and write songs for other artists, was forced to accept outside help (including background vocals by Fiona Flanagan and Michael Bolton) with this album. Reluctant or not, Nova still turned in a terrific performance, and the result is one of the best examples of glossy melodic rock the mid `80s had to offer. The melodies are catchy, the synths are none too subtle, the guitar solos are perfect for `80s action movie training sequences, and even the bright cover reinforces the Miami Vice soundtrack vibe Twitch has going on. Theres no “Fantasy” here, which meant the album didn’t make much of a splash on the charts, but nearly every song on Twitch (aside from the throwaway instrumental title track that closes the album) could have been a radio or MTV hit.

I’m obviously a fan of this album, and can’t see anyone who’s still crazy about `80s era AOR and melodic rock not absolutely loving Twitch.

5.0 out of 5 stars
I’ve always loved this album. Pop/rock from the ’80s. Very talented musicians.

5.0 out of 5 stars HIS BEST YET!!,
AS I HAVE SAID BEFORE IN MY OTHER REVIEW OF ALDOs “SUBJECT”, HE IS A TRUE MUSICAL GENIUS. AFTER LISTENING TO “TWITCH”, IT CAN ONLY BE SAID THAT THIS WORK OF ART IS HIS BEST ONE YET!
HIS MUSICAL BRILLIANCE IS UNIQUE. I WILL CONTINUE TO ADMIRE ALDO NOVA FOR MANY MORE YEARS TO COME.

I LOOK FORWARD TO MAYBE SOMEDAY ANOTHER MUSICAL MASTERPIECE FROM ALDO NOVA. BUT FOR NOW, ALL OF HIS GEMS WILL NEVER BECOME JUST MEMORIES.

LISTEN TO ALL OF ALDOs WONDROUS GIFTS, AND YOU TOO WILL HAVE TO AGREE THAT ARTISTS SUCH AS HE ARE FEW AND FAR BETWEEN.

5.0 out of 5 stars ALDO NOVA TWITCH,
This is a great album. Aldo Nova is one under appreciated artist who should have been able to hit it big among the other bands such as Whitesnake, Def Leppard, and Bon Jovi. His work in 92′ with Bon Jovi on his album “Blood on the Bricks” actually surpasses this album. Unfortunately its not available on CD anymore. This was recommend by Sammy Hagar and was glad I came across his Imputed info on it.

5.0 out of 5 stars 3s a charm,
Aldo Novas great lyrics were again matched on this. He went a bit techno on the Title song, but with some success. A worthy addition to any Aldo Nova fans collection. Stay away from “Blood on the Bricks” CD. A big disappointment to this longtime Aldo Nova fan.

5.0 out of 5 stars Great melodic rock,
The third release from Aldo Nova was a departure of sorts from his first two. Pressured from his record company, he brought in a number of outside writers and musicians for the music here, and recorded what presumably was to be a more commercially friendly release. Although Aldo Nova later appears to have been displeased with TWITCH, I found this to be superb. Why it was not a monster seller is a mystery to me.

TWITCH leans very heavily on keyboards – even more so than his previous release SUBJECT. That’s not necessarily a bad thing as long as they are a match for his wonderful guitar playing – which in my opinion it certainly was. TWITCH is also more mellow than the significantly harder rocking SUBJECT from two years earlier. Musically, this kind of reminds me of what one might get from a musical cross of April Wine and Dokken.

Aldo Novas singing on TWITCH is not very different from his first two releases – he has a mellow voice and style that is largely devoid of the more soaring vocals from guys like Rob Halford or Bruce Dickinson when they just cut loose into the microphones – Aldos style of singing reminds me more of a mellowed out Don Dokken.

TWITCH begins with “Tonight (Lift Me Up)” – a mid-tempo mellow rocker with a memorable guitar solo. This song was very radio friendly and could have been a hit.

“Rumors Of You” is a ballad with a female guest sharing vocal duties. A decent tune – sounds like it could appear on adult contemporary radio.

“Surrender Your Heart” is one of my favorite ballads. This too has a female guest on vocals. Its not exactly a power ballad – its too soft on the electric guitars for that – but the keyboards are awesome and these lyrics for the love of your life make this one a winner.

“If Looks Could Kill” and “Stay” are both melodic rockers that have a pop-metal feel to it. Sort of like early Bon Jovi. “Heartless” and “Fallen Angel” are the two fast rockers on here. Although loaded with keyboards, both have some fancy guitar work. TWITCH closes with the instrumental title-track. All told, I think a great effort.

This out-of-print release is now rare and very hard to find, so if you ever see for under – say, $20, I advise you to grab it as you never know when you’ll see it again. Ditto for SUBJECT, BLOOD ON THE BRICKs, and NOVAs DREAM.

5.0 out of 5 stars MASTERPIECE,
A MASTERPIECE, THAT TUGS ON YOUR HEART AND SOUL. THIS IS HEAVEN PEOPLE!!!

5.0 out of 5 stars classic sounds,
a fine LP with killer hooks and great guitar licks. the lyrics on “heartless”, “lift me up”, and “if looks could kill” are rock-n-roll heaven. glad to see this … awesome guitar work! 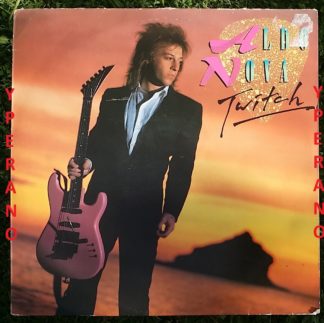