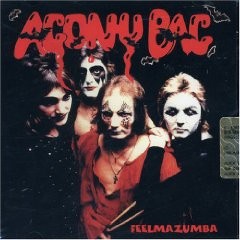 Featuring Clive Jones and Clive Box from Black Widow, plus Bruce Cluley on lead guitar and Geoff Beaven on bass guitar and vocals.
First release for band formed by Clive Jones & Clive Box, both originally from the legendary UK metal band, Black Widow. Originally recorded in 1980 it is an explosion of metal, glam, punk & progressive.
Metalâs fine riffs and raw heart pounding production while Punkâs vocal style and senseless lyrics have been fused together just flawlessly and ideally. Well, I just find this album hilarious, in a good way. This mixture is just so weird & unique that Iâm glad I heard this album and at the same time I canât wipe that smile off my face. The whole thing is just a little too comical!
But seriously, this is good original music, and itâs not limited to guitars and drums. We can also hear keyboards, bagpipes, flutes and various other effects. Riffs as well as choruses are catchy and are accompanied by extremely funny lyrics, but I guess Iâve already said that enough times.
If I had to compare it with some a band which belonged to neither of the genres, it would be Freak Kitchen. Both bands feature an unusual fusion of genres and both have written about some of the oddest topics that most people wonât dream about even if they were high and both have short catchy songs.

Someone on Dangerous Minds mentioned them on a Black Widow post. So I thought, “Hmmm..Cross-dressing Pansexual Prog-Punk sounds interesting.” And this song is! By this time people wanted something different than stadium rock/prog rock…and this change in style could either make or break you. Many bands from the previous era had difficulty during this period adapting, and simply vanished. In many cases it was easier for newer bands during the late 70’s to make it, than it was for the older bands/artists trying to shed old images/styles and create new ones.