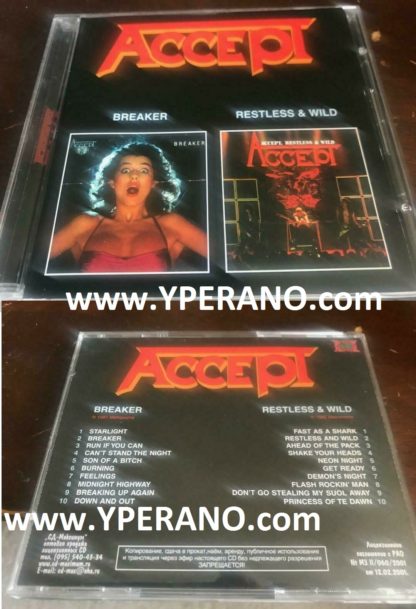 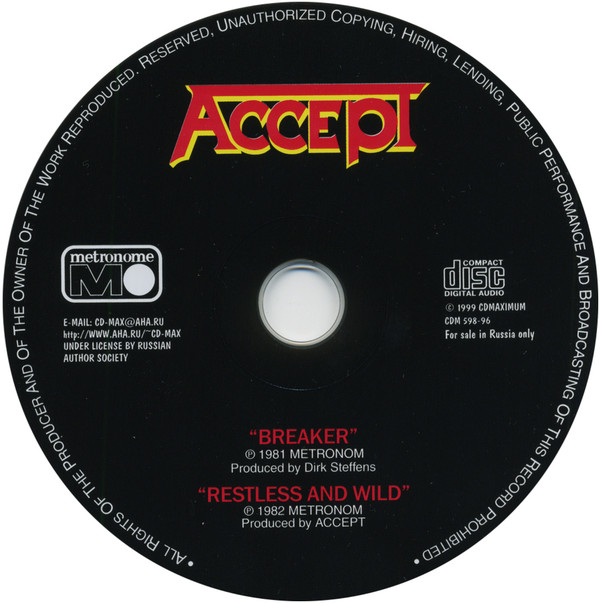 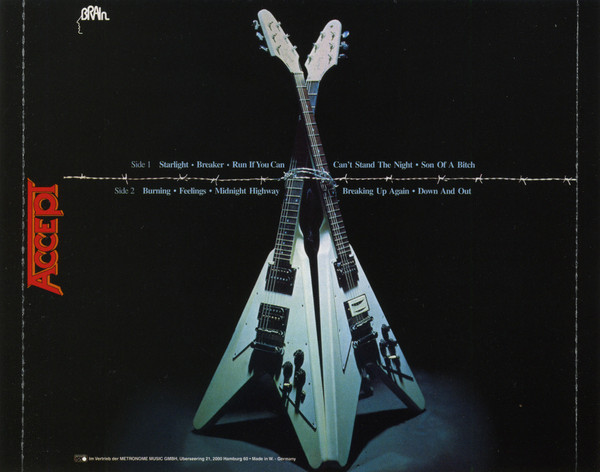 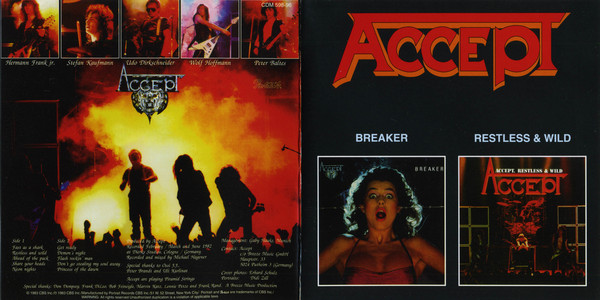 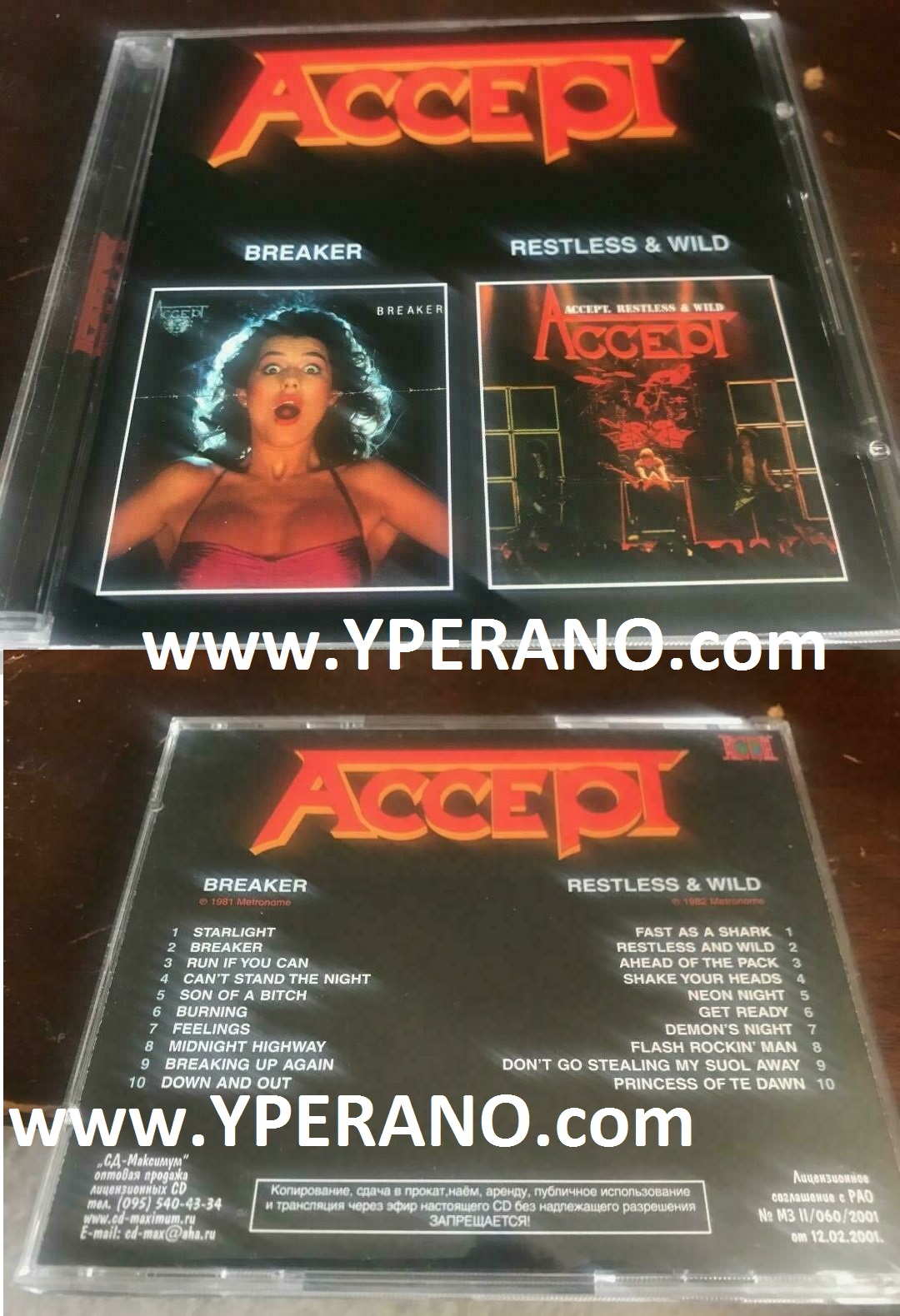 Breaker is the third album released by the German heavy metal band Accept. It was once again recorded at Delta-Studio in Wilster with Dirk Steffens producing, and was the first Accept album engineered by Michael Wagener. Bassist Peter Baltes sings lead vocal on “Breaking Up Again”, and the bridge vocal on “Midnight Highway”.
After the unsuccessful attempt at commercialism on I’m a Rebel, Accept decided not to allow any more outside people to influence the band. Pulling together in the midst of a very cold winter, the band members concentrated on making the album they themselves wanted to make. Udo Dirkschneider remembers: “Following our experiences with I’m A Rebel we made it our goal not to be influenced musically by anyone outside of the band this time.” Udo believes Breaker is among Accepts best records and marks the beginning of the bands greatest era – the album title would later become the name of Udos own record company, Breaker Records.
Wolf Hoffmann concurs: “Maybe we knew that the old approach from the record before didn’t work very well. So we were saying ‘fuck it, lets just do what we think is right. Lets not try to be somebody else, lets not try to have a radio hit anymore.'” The lone possible concession to commercial interests was the upbeat rocker “Midnight Highway”, which Wolf described as “sort of a semi-commercial attempt” and “a little too happy for my tastes.”
Much of the rest of the album is angry and defiant in tone, especially the profanity-laced “Son of a Bitch”. Udo describes that songs lyrics as “absolutely anti record company.” Wolf explains why this particular song was the only one to not have its lyrics printed inside the album: “On the initial release we thought it would be a good idea to just put “Censored” on the liner notes for the song to avoid any controversy. Well, it turns out it caused more controversy that way with everyone wanting to know who censored it.” An alternate version titled “Born to Be Whipped” was recorded with tamer lyrics. Wolf explains: “We had to change it because the British were so uptight about this kind of stuff that you couldn’t possibly release the record over there with a song called Son of a Bitch.”

In which our heroes slowly but surely become the Accept we know and love, absurd cover art betraying the killer, steely, German metal enclosed. We’re not quite at Restless and Wild levels of proto-thrash mayhem yet, but we’ve got brisk, speedy, economic and melodic Teutonic metal; we’ve got the excellent “Starlight.”  We’ve got the title track, featuring probably the most effective use of the words “bicycle chains” in a metal chorus ever. We’ve got “Son of a Bitch.” We’ve got Baltes singing on the obligatory forgettable ballad again. We’ve got the excellent “Run If You Can,” perhaps the first example of Accept really tapping into their melodies to full effect. The great “Can’t Stand the Night” finds the band finally exploring a dark, moody space that’s not a rote ballad. The second half of the album finds the band absolutely confident and settling into their sound, “Burning” and “Feelings” standing as  complete classics. And then there’s “Midnight Highway,” the band tapping into that great melodic commercial sound they also do so well and would peak with on Metal Heart.

“Heidiheidoeida” …..who doesn’t know this cult beginning, where after a scratch a scream and then speed hell breaks loose? “Fast As A Shark”, is one of the most important Metal cult songs ever. Mega hymns like “Princess Of The Dawn” you only write once in a lifetime. “Shake Your Heads”, “Neon Nights” or “Demons Night”, all immortal classics. Essential….

The album kicks off with one of the all-time greatest intros. If you haven’t heard it I wont ruin it for you, but I’m guessing the intro surprised more than a few fans who put their needle on this vinyl for the first time in 82 or 83.
The highlight of this album is, of course, the ferocious Fast As A Shark. This balls-out speed monster is a neck-snapping jack hammer of righteous metal awesomeness. In case your neck is still intact after Fast As A Shark, the album also includes one of my favorite fist-pounding anthems, Shake Your Heads. Another cool track (with a gnarly intro) is Neon Nights. Restless And Wild just goes to show that you should never doubt a heavy metal band with a troll for a singer; even if said troll is wearing a tight camouflage shirt with bright suspenders.

Be the first to review “ACCEPT: Breaker / Restless And Wild CD (2 albums in one disc) 20 SONG official compilation” Cancel reply 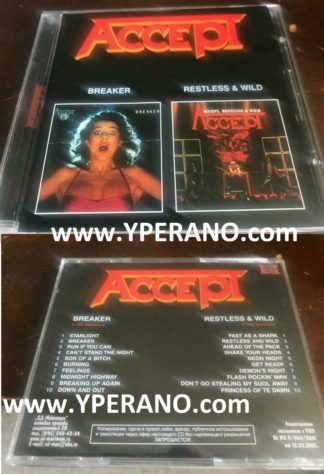