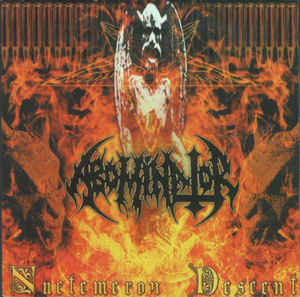 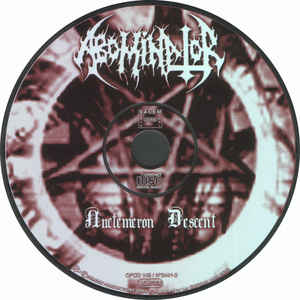 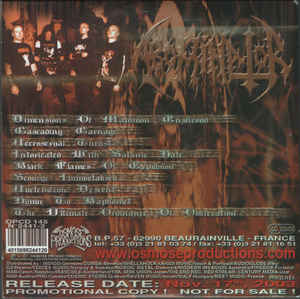 When it comes to Metal, the Aussies are able to make the most fucked up and violent albums ever made. ‘Nuctemeron Descent’ is fast as fuck, kicks ass like it’s not been kicked for a long time and should get any insane guy locked up in an asylum scream in joy.

After emerging from the ashes of Australia’s original war metal lunatics Bestial Warlust, Abominator has steadily been building up strength from the inception of their cult Barbarian War Worship demo, from a primal blast of pure speed much in the same style as BW, into the fire-breathing monstrosity which has now unleashed their third full-length assault of psychotic metal. After numerous lineup changes leaving drummer Chris Volcano as the only original member, this heathen war machine is now primed for complete global annihilation. Nuctemeron Descent takes the foundation of extreme speed and spiked-club brutality of Abominator’s previous album Subversives For Lucifer and wraps it in a stellar production which provides much needed emphasis on the guitar riffs (something the previous album lacked) and gives the entire soundscape a slightly cleaner edge without sacrificing any primal rawness.

Overall, one can’t help but be reminded of old Morbid Angel and Angel Corpse here. The blasting, ferocious drumming, snarled vocals, and classic old school death metal riffs pierced by the occasional tormented lead break all smack of both bands’ ability to seamlessly merge sheer violence with thrashing power and a good dose of chaotic melody where needed.

Of the 9 songs on this disc, the most impressive have to be the completely unhinged “Necrosexual Thrust” (which is riddled with piercing high-end tremolo riffing amidst the downtuned mayhem), the steamrolling “Scourge Immortalised” and the final 7-minute battery of “The Ultimate Ordinance Of Obliteration”. That said, there’s not one weak moment here. Every track maintains the same standard of extreme speed and chaotic power… so much that the album becomes somewhat samey, but that’s hardly a disadvantage. You’ll never catch me complaining about repetition – on the contrary, I have a perverse fondness for albums that stick to the same formula the whole way through, rather than becoming bogged down in unnecessary experimentation or failed attempts at diversity. So, rather than worrying about such trivial matters, i’ll just highly recommend this disc to anyone with a taste for well played, extremely fast blackened death metal. Horns up!

5.0 out of 5 stars One of 2004’s Best Black / Death Metal
A Pure Satanic Assault. A Relentless Militant Attack, Ceaseless in it’s Ferocity. My Personal Favorite.

5.0 out of 5 stars NUCTEMERON DESCENT,
this CD is fast and brutal, its metal in its most honest  and purest form. I have all 3 of their releases and only hear them getting more blistering every time . If you are looking for a CD that will knock your teeth out and leave
your head spinning on the floor BUY THIS! this music will not appeal to trendies !! buy it or die …. hail metal (REAL METAL)” 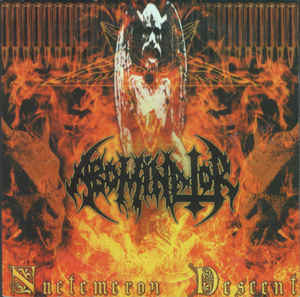