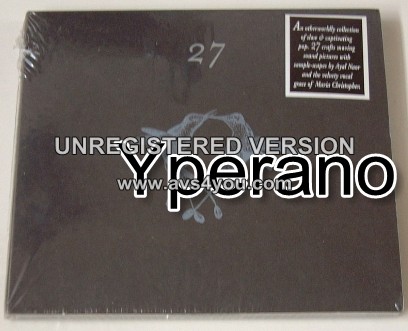 27: songs from the edge of the wing (sealed digi pack CD). limited to 500 copies only. Slow & captivating darkwave pop. Check audio and video

It is odd to think that this album was released on Relapse, the home of chug and grunt, stable to the masters of genres that end in ‘-core’. Odd because, though there is a darkness to this album, it is subtle and wavering. Whilst their labelmates revelled in pitch blackness, 27 preferred to cavort at the edges of the shadows.

This record is not, as you might rightly expect, metal. There are guitars, yes, but nothing that is traditionally heavy, and certainly no sub-two-minute thrashes or gargantuan doom beasts. There is something almost folky about the songs here – especially in the female vocals – or even, in the case of album highlight ‘Warm Hands, Cold Heart’, jazzy, albeit in a subtly brooding fashion.

27 are at their best when doing something a little different. The aforementioned track is sparse and affecting, whilst ‘The Lone Mariachi’ and its discordant intro grasp the attention expertly. However, this does mean that, when they mine a less experimental vein, they risk sounding a little ordinary. Never outright ‘bad’ – nothing on this album truly offends the ears – but one may wish they had pushed the envelope a little further.

Rather like a sandwich, this album has its tastiest stuff in the middle, but the overall experience is perfectly palatable. The band moved on to different, more electronic sounds with the music they produced for Undergroove, so it is best to enjoy this what for what it is – a thoroughly enjoyable diversion, if not the outstanding work it could have been