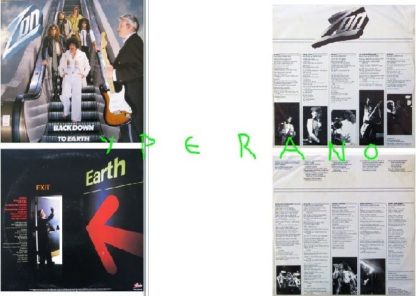 1979s Back Down to Earth was produced by Lorusso and the late Vancouver keyboard player Dale Jacobs. The band played in Toronto as headliners with up to 17,800 attendees. A reporter for The Globe and Mail, who had only stayed to see the opening act, wrote a scathing review. The negative review was the headline of the national entertainment page. CBS demanded compensation for the impact on Zons popularity but neither they nor the band ever recovered.
Zon was dropped from CBS after a thorough corporate housecleaning of the A&R Department despite Zon already having their contract signed for a third album.

5.0 out of 5 stars Rockwarrior in the Zon

Great flow, fantastic musicianship and a very upbeat vibe! I really liked the concept Back Down to Earth!
Circus starts the album off as the big powerful opener, Cheater is a fabulous song which features vocals which seem to lead into something dark or bad and then change into the next vocal line without finishing the last word. Very Cool and fun to listen too. Back Down to Earth is another of the big songs with the harmony and vocals. My favorite on this album was “Take it From Me”. A rocker with great vocals/guitars. Again, every song is worth a listen.

If you like Zon’s progressive rock style, I would suggest you try “City Boy: The Day the Earth Caught Fire!” Another great album virtually unknown by anyone!! Progressive concept album with great harmony vocals, keyboards and musicianship!

If I could rate this albums higher I would. 5 stars will have to do!!

Canadian pomp rockers Zon, which were originally released at the end of the 70s. What set them apart from other Canadian bands at the time, was their theatrical approach. Anyone who saw them performing live 25 years ago, will tell you how impressive they were. With special costumes and masks, it was indeed something you had to see at the time. Musically the band played keyboard orientated rock and have always been compared to Queen and (especially) Styx. As a matter of fact, one of the highlights of their (rather short) career came when they were asked to support Styx on their Grand Illusion tour. On Back Down To Earth, CBS tried to push them into a more commercial direction and this is slightly more commercial with hints of Boston and the mighty Airborne in places but with equally good songs ‘Circus’ and ‘Gods And Kings’ being good examples. Negative publicity and a corporate clean-out saw CBS dropping them from their roster.

Canada’s answer to the mighty Styx at their peak ! And a great answer it is ! This is great pomp rock! There are some brilliant tracks here like ‘ Circus’. Exciting stuff indeed. Great sound quality !!! If you like pure pomp, you can’t do without this one ! BUY.

Yes its just like Styx! Yes its even better at times (if you ask me anyway) and yes this is a must have for all AOR/pomp fans!

they mark of course part of the aor-pomp era great fabulous work. Lots of keyboards, and galloping guitars, resembling a cross between Queen and Styx, and doing a great job too.

This release made an old pomp rocker very happy. Classic pomp a la STYX, TRILLION, STARCASTLE etc So over the top you have to chuckle at some of the lyrics, would never get away with them these days.

Jeez! I love this band. Back Down to Earth is fantastic especially Circus and Gods and Kings. Kinda like genesis meets queen .. Great stuff.

A great Pomp Rock band with a taste for theatrics (hence the Queen comparisons I suppose..) A must for any pomp rock fans collection.

Be the first to review “ZON: Back down to earth LP 1979 Toronto, Canada. A la Queen, Styx. Progressive rock. Check audio.” Cancel reply 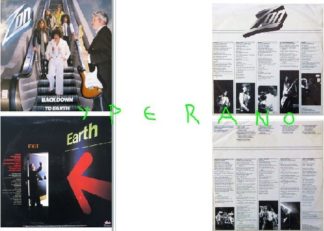