Wild Horses was formed by ex-Rainbow bassist Jimmy Bain and ex-Thin Lizzy guitarist Brian Robertson. Wild Horses music was guitar driven and loud.  “Stand Your Ground” the title of their second album, was very fitting as Robertson and Bain, in a cloud of substance abuse were now arguing on the musical direction of the band.  Perhaps the angst this caused was able to push the pair as the sophomore effort is every bit as good as the first, even if the music is not as uniform.  Songs like “I’ll Give you Love” and “New York City” both are great examples of how good this band was and how big they could have become. 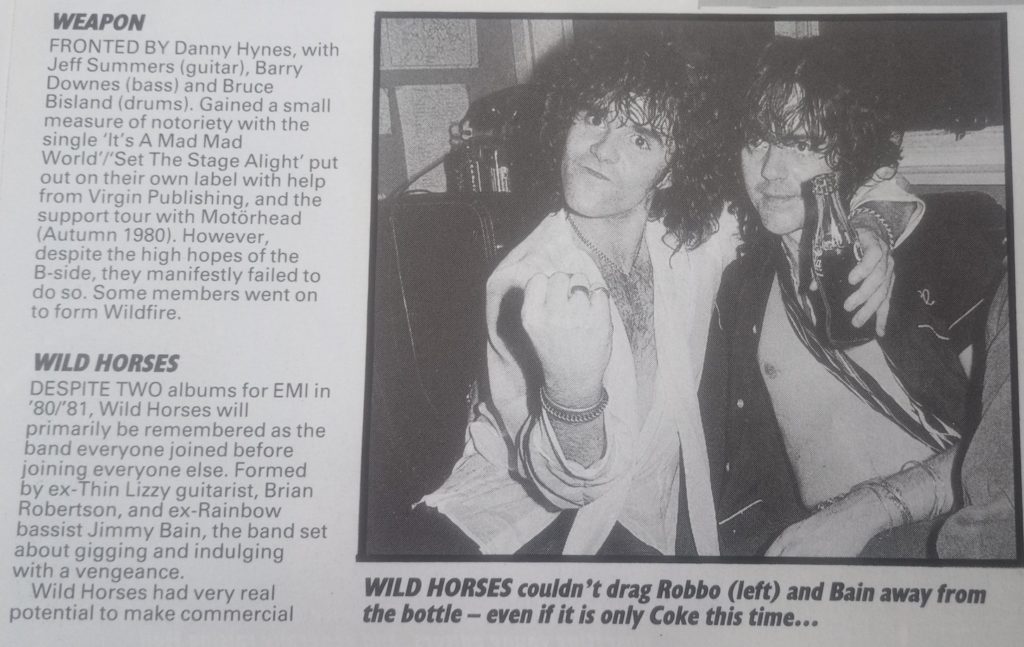 1981 s excellent and Your Ground , produced by veteran knob twiddler Kit Woolven, proved to be something of a final roll of the dice for Wild Horses. Following its release, Neil Carter flew the coup for UFO and then undertook an extended tour of duty with one Gary Moore. Robertson was to become a somewhat unlikely replacement for Fast Eddie Clarke in Motorhead and drummer Edwards upped sticks to ex Whitesnake man Bernie Marsden s new band S.O.S. The band undertook a few shows at London s famed Marquee club but fairly inevitably EMI pulled the plug on the band before a tour in support of Stand Your round could really get underway.

5.0 out of 5 stars and Your Ground’ stands the test of time well!
WILD HORSES – and Your Ground’ is one of the unsung gems from the NWOBHM era. Always really loved this disc for some reason. The problem for Wild Horses was that they didn’t sound like your typical, leather clad, balls-to-the-wall NWOBHM band that were all the rage in the early 80 (Maiden, Saxon, Angel Witch, etc.) but operated on an altogether more sophisticated and refined level.

and Your Ground’ is a big step up from the Horses’ solid but ultimately unspectacular Trevor Rabin (later of Yes fame) produced ‘The First Album.’ Gone are most of the Beatles connotations as well as keyboardist/guitarist Neil Carter (joined UFO and later Gary Moore) whose replacement John Lockton shines alongside fellow axeman Brian Robertson. There are still a few Lizzy-isms (“”You can take the boy out of Thin Lizzy, but you can’t take Lizzy out of the boy…..””) to be found but overall Horses have clearly found a style of their own on and Your Ground’ and deliver 10 tracks of top shelf heavy rock.

Highlights include the seriously revved up opener ‘I’ll Give You Love’, powered along by an infectious Jimmy Bain (also the lead vocalist and doing a very nice job!) bass motif (think Ted Nugent ranglehold’ on speed!), the equally hard charging title cut, ‘The Axe’ (gotta love that great, funky opening riff!), the masterful, introspective ‘In The City’ (nice twin axe lead work by Sirs Lockton & Robertson), the anthemic, care-free ‘Back in the U.S.A’, and ‘Miami Justice’ (possibly inspired by Florida then newly reinstated death penalty). The band even manage to venture into jazzy territory on ‘Precious’ without embarrassing themselves. The album closes out in rockin’ fashion with ake Out.
===========================================================
5.0 out of 5 stars Shades of Thin Lizzy…..
We’ve got some line-up changes from the initial incarnation/release. We now see Jimmy Bain – bass/vocals, Brian Robertson-guitars, John Lockton-guitars, & Clive Edwards on drums.
You’ve got all the wonderful elements at play here.
I never tire of hearing Brian Robertson play. So superior to so many “”poll winning”” guitarists out there.
There is definitely enough here to satisfy the most ardent Lizzy fan.
That not to say these guys were outright clones as they had an identity of their own (although the Lizzy shadow was ever far behind due to the particulars involved)
“”Another Lover”” is the stand-out track that just screams “”Thin Lizzy””.
“”Precious”” could have been something off of thin Lizzy Jailbreak album < Wonderful solo on this one
“”Stake Out”” has that undeniable guitar riff/groove and one of Bain better vocal performances.
“”I’ll Give You Love”” has hypnotic bass and full fledged guitar. Great driving song! Just watch your speed!!!
“”The Axe”” is worth the price of admission for the soloing alone. 🙂
“”In the City”” & “”Back in the U.S.A.”” add some further ammo to this album.
Not a stinker on here and a great album to drive or work out in the gym too!

In many ways I actually prefer the 2nd Stand Your Ground to the first album.
With that said, if you are a fan of Thin Lizzy, Rainbow, or Dio, do yourself a favor and give it a try.
It well worth the cost. : )
This band had huge potential and some serious talent going on.