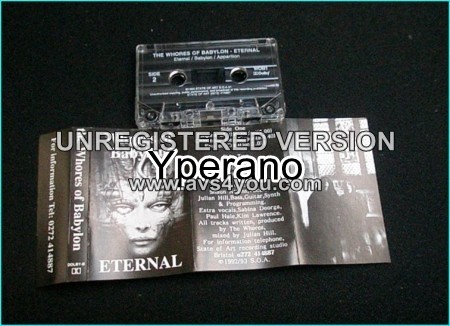 The simple truth is that `Eternal` is brilliant, and despite doing my best to maintain a detached objectivity, I loved every second of it. `Eternal` features `Empire of the Jackel`, `Charmeur des Serpents`, `Eve of Creation`, `Eternal`, `Babylon` and `Apparition`. With titles like this, The Whores are unabashedly Goth, and they handle the genre with both studio perfected precision and unrelenting power. The result is addictive.There is even one of Giger`s nightmare-inspired alien demonesses on the cover of the cassette sleeve to seal what is an overall well produced and highly recommended cassette from this Bristol based duo.