Whitesnake ‎– Slip Of The Tongue
Label: EMI ‎– TC-EMD 1013
Format: Cassette, Album
Country: UK
Released: 1989
Genre: Rock, Hard Rock, Heavy Metal
Tracklist:
A1 Slip Of The Tongue
A2 Cheap An’ Nasty
A3 Fool For Your Loving    [Written-By – Marsden*, Moody*]
A4 Now You’re Gone
A5 Kittens Got Claws
B1 Wings Of The Storm
B2 The Deeper The Love
B3 Judgment Day
B4 Slow Poke Music
B5 Sailing Ships

By 1989 Whitesnake had grown into a monster and criticism of Steve Vai playing is not altogether unjustified. However, he an awesome guitarist and really brings this album to life. The ‘Vai Voltage’ mix of Fool For Your Loving is included, and this is about as self-indulgent as he gets! The songs are better than I remembered, especially the title track and Sailing Ships. Perhaps not as heavy as the previous album, Slip of the Tongue is, never the less, a dynamic and exciting listening experience. Well, I was blown away by it anyway! 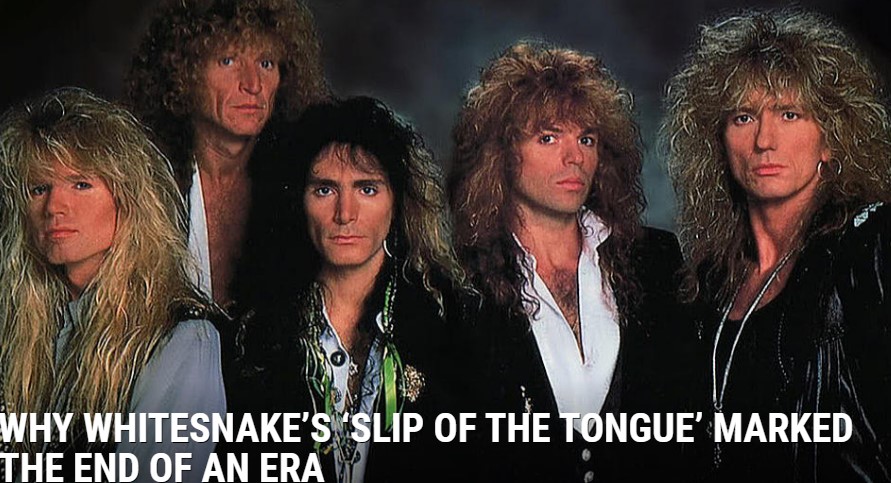 When Slip of the Tongue arrived in stores on Nov. 18, 1989, Whitesnake’s career had never been so healthy, thanks to recent platinum sales, smash hits and sold-out tours. But that doesn’t mean it was any less of a rock ‘n’ roll soap opera behind the scenes.

It had taken Whitesnake leader David Coverdale 10 long years to break his band in the U.S. with their self-titled 1987 album. But you could hardly even call them a band at the time, since guitarist John Sykes, bassist Neil Murray and drummer Aynsley Dunbar were collecting unemployment checks before the record even left the pressing plants.

Coverdale expediently recruited guitarists Adrian Vandenberg and Vivian Campbell, bassist Rudy Sarzo and drummer Tommy Aldridge into their vacant spots, and then proceeded to conquer the airwaves with retooled hair metal, aided by a series of soft-porn music videos that shamelessly molested MTV for months on end.

Two exhausting but rewarding years later, Whitesnake’s League of Nations lineup (Coverdale was British, Vandenberg was Dutch, Campbell was Irish, Sarzo was Cuban and Aldridge was American) were all set to record Slip of the Tongue – until Coverdale and Campbell had a falling out and Vandenberg broke his wrist.

Suddenly, Whitesnake were down both guitarists, so an emergency call was placed to six-string maestro Steve Vai, who was up for the gig, having just quit his job with David Lee Roth’s band. But it was anyone’s guess whether his flamboyant virtuosity would lend itself to Coverdale and Vandenberg’s music.

Then again, as Coverdale himself later admitted, the songs they recorded for Slip of the Tongue didn’t have all that much in common with Whitesnake’s earlier, and distinctly flash-free, heavy blues-rooted music. So in the age of ’80s hair-metal excess, this shotgun musical wedding gave fans exactly what they wanted.

The songs on Slip of the Tongue range from the widescreen pomp-metal grandstanding of the title track and “Wings of the Storm” to the lascivious Sunset Strip-approved sleaze of “Cheap an’ Nasty” and “Kitten’s Got Claws,” to the requisite syrupy love songs “Now You’re Gone” and “Deeper the Love” to the majestic Led Zeppelin rewrites “Judgement Day” and “Sailing Ships.”

If they share any particular trait, it’s the stuffing of every available space between the notes with lush synthesizers, cat-in-heat squeals and Vai’s look-at-me! virtuosity. But it’s the bright cosmetic makeover applied to the Whitesnake warhorse ‘Fool for Your Loving’ that best gauges the sheer scope of the album’s excessiveness.

In any case, Slip of the Tongue easily shot into the Top 10 and cruised to platinum status, while producing four hit singles. The band once again filled arena seats with thousands of spandex-clad butts for the next two years – until Nirvana turned the musical landscape upside down practically overnight.

But by then, Coverdale had decided to temporarily disband Whitesnake and collaborate with Jimmy Page in a move that today seems like an obvious gambit by the Zeppelin guitarist to force Robert Plant’s hand into reviving their old band for an album and tour. Coverdale eventually re-formed Whitesnake, and has recorded and performed with various rotating lineups ever since. Tellingly, little of the Slip of the Tongue has made it to the set lists.

Whitesnake, Slip of the Tongue … review 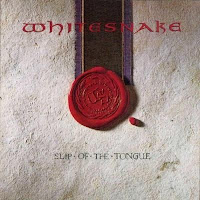 David Coverdale must not have been a happy camper in 1989. With ace guitarist Adrian Vandenberg injured and Vivian Campbell out of the fold, the British frontman was getting mounting pressure from Geffen Records to follow up on the multiplatinum breakthrough success of Whitesnake‘s self-titled 1987 effort.No wonder then that Coverdale tapped musical chameleon Steve Vai to handle all guitar duties on 1989’s Slip of the Tongue. After all, Vai was the “go to” guy of choice for everyone in the hard rock world long before collaborations and guest appearances on other people’s record became the norm in popular music.

Vai had filled Yngwie Malmsteen‘s sizable shoes after the Swede’s departure from Alcatrazz, and David Lee Roth knew he was the only man who could play his foil after the blond-maned rocker’s years with Eddie Van Halen & Co.

Below is a track-by-track take on this quintessential arena metal platter.

“Slip of the Tongue”

A heraldic keyboard intro and quick doses of Vai’s harmonic flash open the record with a sense of drama and pizazz. The hook is relentless and rocking. Lusty lyrics conjure images of Coverdale cavorting with then-wife Tawny Kitaen on MTV in a million homes. Welcome back, boys.

Coverdale gets the record’s most awkward moment out of the way early. Maybe he was just playing to Vai’s recent resume, but spoken Roth-isms like “Just to the left, love” and “Don’t talk with your mouth full” during the song’s breakdown sound very un-rock & roll when it’s the Queen’s English coming out of your mouth.

“Fool for Your Lovin'”

In order to score his first and only No. 1 pop hit, Coverdale dug deep into Whitesnake’s history to reprise “Here We Go Again” — a song that first appeared on the band’s 1982 album Saints & Sinners.

So it was only natural that Coverdale would look back to 1980’s Ready an’ Willing to try to capture the gold again. However, it’s the bluesy edges of this track that prevent it from being pop-metal paradise.

The first of two power ballad-ish moments aimed at the “Here We Go Again”/”Is This Love?” audience.

This mid-tempo number has all the hallmarks of what could be a classic: the keyboard heaven intro with a searing, melodic lead; a few plaintive lyrics about lost love to open the song over a bed of lush keys; a quick cut to a metallized bridge; and the payoff of an arena-rock-sized hook meant for singing along to.

But it all feels a bit “by the numbers” and like it’s been piece together from disparate parts, more a product of studio stitchery than anything else.

While we’re on the topic of studio work, it never ceases to amaze me that you can still hear unintentional noise bleeding through during the quiet parts on some of these big-budget major label releases.

Pop on a pair of headphones and listen at exactly :21 seconds during the intro to hear a muffled voice in the right channel. Later, at :26 seconds, you can hear an even fainter sound of what seems to be someone in studio laughing as Coverdale trails off from the song’s opening lyric.

Perhaps studio whizs Mike Clink and Keith Olsen were too busy producing the Sea Hags’ self-titled debut and the Lean on Me soundtrack (!) in 1989 to notice in the final mix! 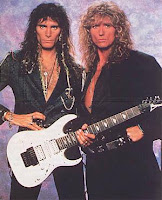 Was Steve Vai the right fit for Whitesnake? Well, he certainly brings a sense of humor to heard-it-all-before material like “Kittens Got Claws” when he makes his guitar meow and purr during the intro and outro. His vibrato work on this one has that quintessential Vai sound — as plastic and flexible as a melting watch in Salvador Dali painting.

“Wings of the Storm”

After the rockin’ comic relief Of “Kittens,” things gets deadly serious again with the driving metallic riffing of “Wings of the Storm.” Anyone notice the musical similarity between this number and “Bark at the Moon”? No surprise really, considering that bassist Rudy Sarzo and drummer Tommy Aldridge both laid rhythm for that mid-1980s Ozzy Osbourne classic.

Of course, Vai makes “Wings of the Storm” his own during the solo. Check out the extended descending fretboard run at 3:17 for proof.

“The Deeper the Love”

While “Now You’re Gone” may have been the heir apparent to “Here We Go Again,” “The Deeper the Love” is my pick as the stronger of the two power-ballad singles.

Coverdale layers his airy vocals like cotton candy over dreamy keyboards. The guitar work rocks you gently with Vai getting extra texture out of what sounds like a bit of finger-plucking at the end of the melody line. And that simple, insistent drum beat is the bedrock for what might have been a wildly popular hit single.

It all comes together in a more organic way than “Now You’re Gone,” which has just enough moving parts to feel unfortunately forced. “The Deeper the Love”, by comparison, just flows seamlessly. To paraphrase Marlon Brando, this one shoulda been more of a contender.

Coverdale has often been accused of being a Robert Plant rip-off and “Judgment Day” does little to counter that belief. A vaguely exotic stampede of percussive chords and subtle sitar work call to mind Led Zeppelin‘s “Kashmir.”

This song has an interesting, stuttering rhythm during the chorus. But otherwise it’s not too memorable, despite nice playing from Vai that almost recalls his gritty guitar work on “Tobacco Road” with David Lee Roth.

Opening with minstrel-like acoustic work reminiscent of Ritchie Blackmore, “Sailing Ships” is the perfect end to Slip of the Tongue.

Toward the end, an extended electrified coda erupts in a flurry of Led Zeppelin-esque sonic stomping. Sublime, soul-searching lyrics like “You’ll find that you’re the only one / can sail your ship across the sky” leave you with a sense of wonderment and awe at the possibilities of life.

In the last moments of the song, Coverdale hits a dramatic high note that rivals the one in “Still of the Night,” while Vai’s guitar echoes off into eternity.

Could this be Whitesnake’s “Stairway to Heaven,” with its meld of unique styles into an epic songwriting structure? Perhaps. This much is certain, though: Like a class act, Whitesnake leave you wanting more with “Sailing Ships.”

Be the first to review “WHITESNAKE: Slip of the tongue [Cassette Tape 1989] “Fool For Your Loving”, “Now You’re Gone”, “The Deeper The Love”, etc.” Cancel reply