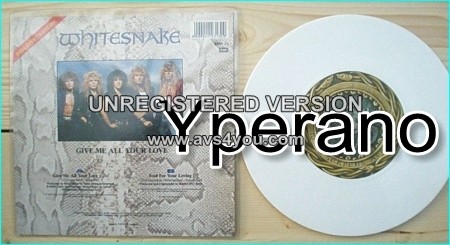 WHITESNAKE: Give Me All Your Love (edit) 7″ + Fool for you loving [Special Edition in White Vinyl]. Check video

“Give Me All Your Love” is a song by the English hard rock band Whitesnake. The song is taken from the bands 1987 multi-platinum self-titled album. The song was the fifth single from the album, and it reached number 48 on the US Top 100 charts, number 22 on the Mainstream Rock Charts and number 18 in the UK charts.
The song was originally written by singer David Coverdale and guitarist John Sykes, and has been a mainstay in Whitesnake’s set-list even to this day, even after Sykes’ leaving from the band.
A music video was also made for the song, and is the lowest budget out of all the music videos for 1987s Whitesnake. The music video starts with the band flying to the venue and arriving backstage. The rest of the video features the band performing the song on a concert stage. The music video differs grately from the others for Whitesnake, as it doesn’t feature David Coverdale then-girlfriend Tawny Kitaen.
In the songs 1988 single release featured a new guitar solo which had been recorded by the bands newest member, Vivian Campbell, known as “Give Me All Your Love (’88 Mix)” (this the version that is heard in the music video).

Be the first to review “WHITESNAKE: Give Me All Your Love (edit) 7″ + Fool for you loving [Special Edition in White Vinyl]. Check video” Cancel reply 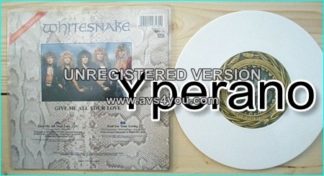 You're viewing: WHITESNAKE: Give Me All Your Love (edit) 7″ + Fool for you loving [Special Edition in White Vinyl]. Check video £4.50
Add to basket