Vandenberg is the début album by the Dutch Hard Rock band Vandenberg, released in 1982 on Atco Records and reaching #1 on the American Billboard charts the album spawned one single; the power ballad Burning Heart.
The album was produced by Adrian Vandenberg & Stuart Epps.

Legend has it after a failed audition with mega-group Thin Lizzy, Adrian Vandenberg went back to the drawing board and decided to start his own band. Poised with an axe to grind and several hard rock influences easily spotted from a mile away, Vandenberg and his band were poised to take over the hard rock scene with their 1982 début. Overall, Vandenberg is a fiery testament to Vandenbergs skill as a guitarist. He shreds with the best of them, taking cues from Hendrix, Page, and a little bit of Tony Iommi. Of course there are the gratuitous moments of guitar acrobatics (“Wait”) and the obligatory power ballad (“Burning Heart”) but that really doesn’t detract too much from the bands main focus: to deliver a solid hard rock record that is easily one of the most underrated début metal albums of the ’80s.

As part of Whitesnake Adrian Vandenberg would become famous, but the guitarist started his career with his Dutch band VANDENBERG in the early ’80s. The group’s self-titled debut still is a hard rock fan’s favorite world-wide. For Adrian Vandenberg all started in the late ’70s with his band Teaser releasing a LP plenty of hot riffs. On the strength of demos for a 2nd album they ink a deal with a major label, changed their name to “VANDENBERG” and flew from their native Netherlands to Jimmy Page’s studio in UK to record the debut under the new moniker.
Produced/Engineered by Stuart Epps, in October of 1982 the self-titled album was released.

“Vandenberg” was a superb effort, easily one of the best albums of that year and one of the best debuts of the era with the emphasis on consummate songwriting, exceptional arrangements, exemplary vocals (from Bert Heerink) and, of course, Adrian’s blistering guitar work.The album serves up a skilful blend of the fast-paced hard rockers infused with the more catchy aspects of European Rock&Pop, along with a few tracks that explore a more melodic and sometimes acoustic side.
“Vandenberg” also featured the hit single “Burning Heart” — one of the ’80’s first power ballads, and still one of its best.
This is one of my favorite earlier ’80s discs in this genre – melodic hard rock blended with commercial hooks – ahead for their time, when most the bands in Europe were still playing a more straight NWOBHM. “Vandenberg” really doesn’t have a weak track.

Burning heart | The story behind the song

The debut album from Vandenberg is an unsung jewel of classy, well-played, well-produced, and well-voiced Dutch hard rock. The bands namesake was guitar virtuoso (and artist) Adrian Vandenberg, who showcased his excellent songwriting, and tasteful guitar mastery throughout this superb, smooth record.
This is an album that can be played start to finish without any need for the skip button. Every song is a good one. The production is understated, but quite fitting for the bands disarming nature. You would be hard pressed to find an album that has a more even partitioning of the individual instruments; bass, guitar, drums, and voice. Adrian Vandenberg does not try to take over the show and outshine his band mates, although one could not blame him if he did, as he is quite the player indeed.
The bands other not-so-secret weapon was the bright and pitch-perfect voice of Bert Heernick. Hes a great singer; one I could listen to all day.
Favorites include the ballad Burning Heart, and rockers Your Love Is In Vain and Ready For You. Those of you who only know Adrian Vandenberg from his stint later on with Whitesnake should check out this excellent band that lasted for three solid albums. Start with Vandenberg, the first and best of the lot. 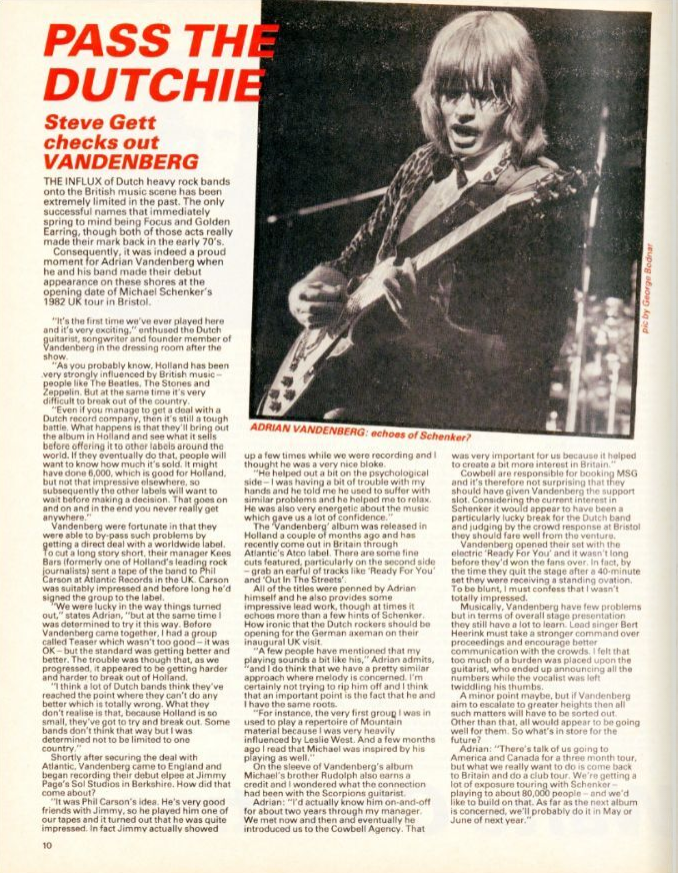