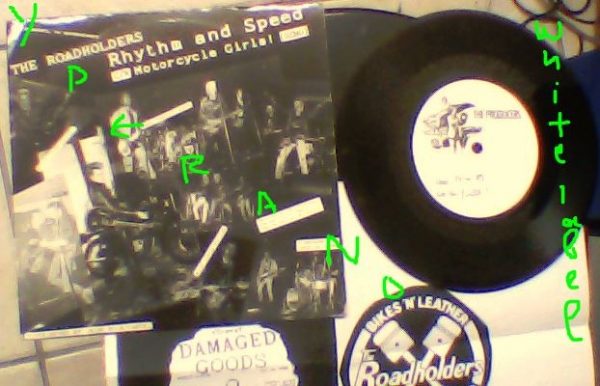 THE ROADHOLDERS: Rhythm and speed + Motorcycle girls! 7″ white label test pressing. The B side has a totally white label. The side you can see in this picture has:
the Date of the single was pressed 27-6-89 and
the catalogue Number YUBB 1

The Roadholders emerged in the early 1970s as a glam/punk experiment. Founder and drummer for both bands, Rocky Rhythm (a.k.a. Nicky Forbes), along with Sex Pistols bassist Glen Matlock joined forces to create The Roadholders. Their first release, Rhythm and Speed b/w Motorcycle Girls (on red clear vinyl) set out their store; for an anthem-like Glam/Punk sound with a difference. Teaming up with former Alien Sex Fiend/Danielle Dax guitarist, Stevie Savage, together with Bomb City Junkies bassist Eden and Gianfranco on drums, The Roadholders honed their sound, blending Rockabilly with their earlier Glam/Punk style to create blistering, danceable well-crafted songs and arrangements.

Nicky says; Id always been searching for my ideal. But could never quite find it so I formed The Roadholders to create the kind of music I liked. I wanted to form the ultimate glam/punk band and so teamed up with long-time friend, Stevie Savage.

Following collaborations with Danielle Dax in 1985, and the release of two solo albums under the name of Steve Reeves and The Ryme Intrinsica; Stevie Savage set up his own studio and production facility (Pinxis Productions). Supporting upcoming bands and artists, Pinxis produced several high quality recordings to help secure recording and publishing deals. By the early 90s though, Stevie, searching for a new project, found little to inspire until Nicky re-established contact and played some demos hed recorded.

Stevie comments; I was knocked over by what I heard; it was dynamic, ingenious and the songs were brilliantly crafted. I knew from the outset that it was something Id be into. It had all the qualities and elements from my favourite artists, yet was still a unique sound.

Toward the end of 90s, feeling increasingly frustrated with the scene, The Roadholders went into something of a voluntary cryogenic stasis, with all members pursuing other paths in the following years. Nicky released his autobiography, The Rhythm Method, to much critical acclaim while Stevie concentrated on session work and Gianfranco toured extensively with powerpunk trio Guitar Gangsters.

Fast-forward to early 2011, and The Roadholders are back, with new material being written, their mission , Nicky says; to write catchy songs of anthem-like rock with a modern twist incorporating elements of riffy surf guitar twang, near-punk rhythm and tub thumping drums. Convinced that a new generation of music lovers will join the original fans as the band take to the road.