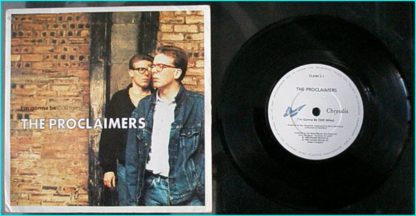 “I’m Gonna Be (500 Miles)” is a song written and performed by The Proclaimers. It was released on their 1988 Sunshine on Leith album, and subsequently as a single. It has become one of their most popular songs, reaching No. 11 in the UK charts and No. 1 on the Australian ARIA Charts in 1989, plus, five years later, No. 3 in the US Billboard Hot 100. The song has become a live staple at their concerts. The Proclaimers played it at Edinburgh 50,000 – The Final Push, the final concert of Live 8 at Murrayfield Stadium on 6 July 2005, to symbolise the conclusion of The Long Walk To Justice.
The song is popular in Scotland, where at Hampden Park, every time the national football team scores, the song is played and sung along to by Scotland fans. This also occurs at Murrayfield Stadium when the Scotland rugby union team scores a try, and Easter Road Stadium when Hibernian – the team The Proclaimers support – score. The song receives a similar kind of following at darts events when played as a “walk on” tune for Scottish player Robert Thornton. It was featured on the soundtrack to the 1993 film Benny & Joon, when one of the films stars, Mary Stuart Masterson, kept on playing Sunshine on Leith while filming the movie and the filmmakers took special notice of this song in particular. As a result the original music video was re-edited with clips from the film. The inclusion of the song on the popular film helped popularize the song in the United States, where it is mistakenly but commonly regarded as a 1990s song, despite being recorded and released in 1988.
In 2006, the song was featured as a cutaway gag on the Family Guy season 4 episode “You May Now Kiss the… Uh… Guy Who Receives”. The song was also the theme song for the Swedish TV-show, High Chaparall. It was also featured repeatedly in the How I Met Your Mother episode “Arrivederci, Fiero” as a “cassingle” of the song becomes stuck in the tape deck of Marshall Eriksens Pontiac Fiero, and remains there for the duration of 1994 to 2007. It was featured once again in How I Met Your Mother in the Season 5 episode “Duel Citizenship” as the roadtrip music for Ted and Marshall. It was also played over the end credits of the 2010 film Burke and Hare. The song has also been associated with Terry Foxs walk for cancer. On 11 September 2010, Matthew Wilkening of AOL Radio ranked the original version of the song at #50 on the list of the 100 Worst Songs Ever, exclaiming, “We’re halfway through our list! Doesn’t it feel like your ears have walked through 500 miles of bad songs?” In October 2010, the song was played during the Glasgow 2014 handover section of the closing ceremony of the 2010 Commonwealth Games. In the book I Am The Messenger , the main character listens to this song during hurting another character.
The song was also very popular in Spain in late 1990s thanks to TV advertisements. It was the reference song for the ads of one of the first telecommunications companies in Spain (after liberalization of the sector in 1997 which previously monopolized Telefónica), Retevisión (today ONO) First ads with the original chorus and later with restilizations of the song to a sound more personalized for the company in last years.

Be the first to review “The Proclaimers: I’m gonna be (500 miles) 7″ Check video” Cancel reply