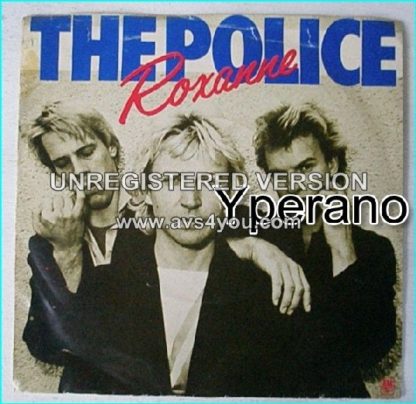 Producer – Police
This version has the A&M logo on the label in grey colour and blue letters.

“Roxanne” is a hit song by the rock band The Police, first released in 1978 as a single and on their album Outlandos d’Amour. It was written from the point-of-view of a man who falls in love with a prostitute.

Police lead singer Sting wrote the song, inspired by the prostitutes he saw near the bands seedy hotel while in Paris, France in October 1977 to perform at the Nashville Club. The title of the song comes from the name of the character in the play Cyrano de Bergerac, an old poster of which was hanging in the hotel foyer
Sting had originally conceived the song as a bossa nova, although he credits Police drummer Stewart Copeland for suggesting its final rhythmic form as a tango. During recording, Sting accidentally sat down on a piano keyboard in the studio, resulting in the atonal piano chord and laughter preserved at the beginning of the track. The Police were initially diffident about the song, but Miles Copeland III was immediately enthusiastic after hearing it, becoming their manager and getting them their first record deal with A&M Records. The single did not chart, but when re-released in April 1979, it reached #12 in the UK  In the US, the single entered the Billboard Hot 100 chart in February 1979 and peaked at #32 in April. The song went on to become a staple of Stings performances during his solo career.
Roxanne has appeared on all of the Polices Greatest hits albums. Rolling Stone ranked it #388 on their list of the 500 Greatest Songs of All Time.
This was also the first song the band performed live (at the 2007 Grammy Awards) to kick off their 30th Anniversary Reunion Tour.

Music video
There were three different music videos released for “Roxanne”. The first shows the band performing the song on a stage on what is perhaps a sound check to a show. Many slow motion shots of the group live appear here as well. The second version was shot on a soundstage and shows the band performing before a red backdrop. The third version is identical to the second except the footage was transferred from videotape to film and has a grainy quality to it

Cultural references:
In the 1980s-1990s, this song was used as the intro to Saturday Night Lives “Weekend Update” with Dennis Miller.
Rapper Cam’ron sampled “Roxanne” for his single “What Means The World to You?”.
Eddie Murphy (as convict Reggie Hammond) is found singing “Roxanne” in his prison cell in the 1982 movie 48 Hrs.
The song was one of the many remixed covers in the film Moulin Rouge!, named “El Tango de Roxanne”.
The Arctic Monkeys song “When the Sun Goes Down”, refers to Roxanne in the lyrics: and he told Roxanne to put on her red light.
The song was also featured in The A-Team episode, “Steel”, while being listened to by Hannibal (George Peppard), B.A. (Mr. T), and Murdock (Dwight Schultz), while posing as window washers before B.A. throws the stereo off the platform in anger and destroys it.
The song was briefly featured in Two and a Half Men episode, “Winky-Dink Time”, sung by Alan while he’s waiting for his prostitute to arrive.
In Family Guys “Oceans Three and a Half” episode, Brian lists many songs named after women. ‘Roxanne’ is the second mentioned.
In The Office, episode 03.16 “Phylliss Wedding”, Kevin Malones band Scrantonicity sings this song during the wedding reception.
In Friends, Phoebe emplores Ross to get tickets for a Sting concert by singing ‘Ross can’ to him.
“Roxanne” has been played during the 2009 John Galliano Haute Couture runway show.
In Community, the song plays during the episode “Remedial Chaos Theory”. 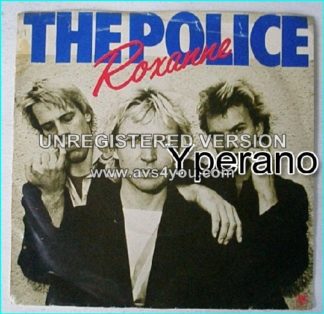