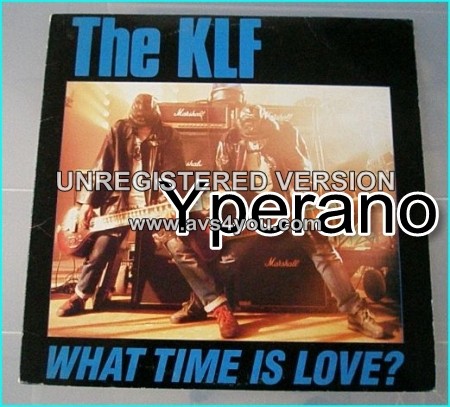 “What Time Is Love?” is a song released, in different mixes, as a series of singles by the band The KLF. It featured prominently and repeatedly in their output from 1988 to 1992. In its original form, the track was an instrumental acid house anthem; subsequent reworkings, with vocals and additional instrumentation, yielded the international hit singles “What Time Is Love? (Live at Trancentral)” (1990) and “America: What Time Is Love?” (1991), which respectively reached #5 and #4 in the UK Singles Chart and introduced The KLF to a mainstream international audience.

America: What Time Is Love?
The single release “America: What Time Is Love?” constituted a major reworking of the anthem and was The KLFs final UK commercial musical offering. It was released in February 1992 in the UK, four months after it was first made available in the US. The KLFs notorious BRIT Awards performance, with death metal band Extreme Noise Terror staged in the week prior to “America”s UK release, concluded with the announcement of their departure from the music industry. This was later confirmed by a full-page press announcement that used images from the set of the “America: What Time Is Love?” music video.
“America” has a markedly different tone to previous incarnations of the song: harder, heavier and more guitar-laden (featuring the riff from Motörheads Ace of Spades). It opens with a protracted narration by The KLFs regular narrator Scott Piering, about The JAMs’ odyssey of 992 to discover America. In common with previous single “Its Grim Up North”, it features a climactic orchestral section and a spoken list of towns and cities. However, in common with the “Stadium House” tracks, the mood of the song is one of jubilation. Between verses, a male chorus chants the word “America” to the tune of the song “Aquarius” from Hair. Isaac Bello again provided rap, and Glenn Hughes (formerly of Deep Purple) provided vocals a contribution which Hughes claimed “saved his life” from drug abuse.
In contrast, the B-side “America No More” is a sombre anti-war statement focussing on US foreign policy. With ambient overtones, it features forlorn guitars, austere brass and a pipe band, set against the backdrop of artillery noise and the recorded words of US politicians, commentators and evangelists speaking either about or during major 20th century US military conflicts. According to Drummond, it was the final track to be recorded by The KLF. Evangelists feature elsewhere in The KLFs music (Chill Out, “What Time Is Love? (Remodelled & Remixed)” and “Fuck the Millennium”), as does gunfire (in the three “Stadium House” singles).
Reviewing “America: What Time Is Love?”, Melody Maker found that “the whole bizarre concoctions brilliantly bonkers”, but questioned The KLFs strategy of recycling their songs. “America No More” was described by The Wire in 1997 as “a devastating protest-montage of helicopters, bagpipes and carpet-bombs”

Be the first to review “The KLF: what time is love 12″USA 1991. Featuring Glenn Hughes [The Voice Of Rock]. Check video!” Cancel reply 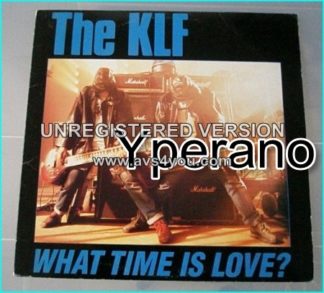