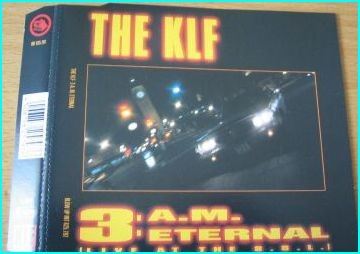 The KLF: 3 AM Eternal CD single Rare 1990 in limited quantity. Check video and audio (the other versions, on CD videos)

Collectors only very hard to find and long out of print EP KLF 005CD made in 1990 in limited quantity. Great condition.

“3 a.m. Eternal” is a song by the British acid house group The KLF. Numerous versions of the song were released as singles between 1989 and 1992. In January 1991, an acid house pop version of the song became an international top ten hit single, reaching number-one on the UK Singles Chart and number five on the U.S. Billboard Hot 100, and leading to The KLF becoming the internationally biggest-selling singles band of 1991 When, the following year, The KLF accepted an invitation to perform at the 1992 BRIT Awards ceremony, they caused controversy with a succession of anti-establishment gestures that included a duet performance of “3 a.m. Eternal” with the crust punk band Extreme Noise Terror, during which The KLF co-founder Bill Drummond fired machine-gun blanks over the audience of music industry luminaries. A studio-produced version of this song was issued as a limited edition mail order 7″ single, the final release by The KLF and their independent record label, KLF Communications. In 2003, Q Magazine ranked “3 a.m. Eternal” at number 150 in their list of the “1001 Best Songs Ever”.

Origins
The original 1989 12″ single release constituted the second of The KLF’s “Pure Trance” series. There were two issues, numbered 005T (pink writing on a black sleeve, with two KLF mixes) and 005R (black writing on a pink sleeve, with four more mixes, including remixes by the Cauty/Paterson incarnation of The Orb (“Blue Danube Orbital” and The Moody Boys).

Stadium House version
A version heavily reworked for a mainstream audience, “3 a.m. Eternal (Live at the S.S.L.)”, was issued in January 1991 and reached number one on the UK singles chart and number five on the US Billboard Hot 100. This version had a rap by Ricardo da Force. Although a lot of crowd noise appears on the mix, it is in fact a purely studio-based creation. The “S.S.L.” in the subtitle refers to a Solid State Logic mixing desk. The seven inch version of this mix appears on the album The White Room. The main B-side was a dub-based version of the same song, “3 a.m. Eternal (Guns of Mu Mu)”, featuring the bassline from The Clash’s “Guns of Brixton”. Concurrent with the chart-topping version, yet another 12″ was released, with resolutely underground remixes by The Moody Boys.

Music video
There are two video versions for the SSL video. The American version includes an opening with a travel through the mythical “Land of Mu Mu” where the KLF are performing inside a pyramid scenery with singers in a stadium. The European version shows the KLF vehicle (the police cruiser used in their Timelords incarnation) voyage around London with rapper Ricardo da Force singing in the backseat and a rave showing in the background.

The KLF vs Extreme Noise Terror
In January 1992, The KLF released a limited edition mail order only single containing a new version of “3 a.m.” featuring the grindcore/crust punk band Extreme Noise Terror (called the “Christmas Top of the Pops 1991” version as the KLF had hoped to perform it on the 1991 Christmas Top of the Pops but were rebuffed the BBC). The two bands instead performed a live version of the song at the BRIT Awards ceremony in February 1992. The Brits performance included a limping, kilted, cigar-chomping Drummond firing blanks from an automatic weapon over the heads of the crowd. After viewing the rehearsals, the NME writer Danny Kelly said: “Compared to what’s preceded it, this is a turbo-powered metallic wolf breaking into a coop full of particularly sick doves… And the noise? Well, the noise is hardcore punk thrash through a disco Techno hit played by crusties. All bases covered, brilliantly. Clever, clever bastards. At the end of the performance, Scott Piering announced to a stunned crowd that “The KLF have now left the music business”. Within a few months, they did just that – their records were deleted and The KLF retired from the industry. Kelly later described the Brits performance as The KLF’s “self-destruction in an orgy of punk rock…, mock outrage … and real bad taste”.

Critical reception
Larry Flick from Billboard commented, “Alternative dance act makes its label debut with an invigorating rave that picks up where the previous “What Time Is Love” left off. Sonic blast of techno/hip-hop, industrial riffs, and R&B diva vocals has the juice to kick hard on the dancefloor and ignite crossover radio action.”

Complex commented that “the message [of the song] is universal: Time is eternal.” Tom Ewing of Freaky Trigger described is as a “awe-inpsiring, colossal, unprecedented dancefloor bulldozer”. Dave Sholin from the Gavin Report wrote, “Production wizardry from these techno-talents earns three stars for a highly original effort. A #1 track in their native England, it’s won over audiences throughout Europe and stands to do the same in North America. Strengthened by a video that is nothing short of exceptional, it’s getting major exposure on MTV with five plays a day in “Buzz Bin” rotation.”

The “Pure Trance Original” was described by Record Mirror as a “euro-flavoured deep house pulser” with atmospheric chanting and a “cathedral-like resonance”.

Be the first to review “The KLF: 3 AM Eternal CD single Rare 1990 in limited quantity. Check video and audio (the other versions, on CD videos)” Cancel reply 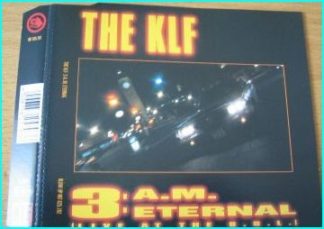 You're viewing: The KLF: 3 AM Eternal CD single Rare 1990 in limited quantity. Check video and audio (the other versions, on CD videos) € 7.19
Add to basket