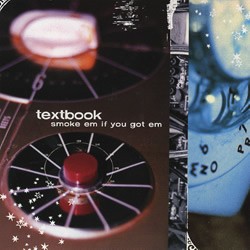 Textbook add some spice into the scene and make Smoke â€˜em If You Got â€˜em so much more than another Jimmy Eat World or Brandtson. The opening track boasts a little edge in â€œWish I Could Hide,â€ as slightly distorted guitars pinch a charmingly sung chorus pointing towards the title, â€I wish I could hide from suicide.â€ The harmonics of Lysienâs voice are delightfully positioned and the catchy guitar work refuses to stall as a few casual solos are thrown in the latter few minutes. The soft rock appeal flows into â€œThe Think Of You Interstateâ€ while a country rhythm is delivered on the inconsolable â€œRailway Station.â€ The piano that graces â€œChalkâ€ feeds the band the same box of cereal the Get Up Kids had for breakfast during their early recording sessions. The immense diversity of the record can be credited to the nine endowed musicians that partake in the created sounds. Four guitarists bounce back and forth creating the mixture that bounces from simple emo melodies to relaxing country tempo, even a little punk on â€œRosenwinkel.â€ The variety supplements the record well, despite the calming voice pouring out of the speakers itâs as if a new band appears on each track.

It was issued by Next to X Records in 2000. This is the dÃ©but album from Dave Lysien and ex-members of pop-punk band NOT REBECCA (who recorded for Johannâs Face Records). They have that midwestern pop-punk sound akin to the Get Up Kids, Dillinger Four, Texas Is the Reason and the Replacements. The band calls Chicago home.

Be the first to review “TEXTBOOK Smoke em if you got em CD. Great pop punk” Cancel reply

You're viewing: TEXTBOOK Smoke em if you got em CD. Great pop punk £2.80
Add to basket