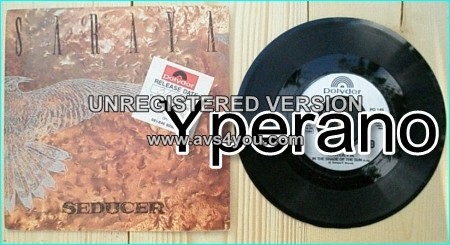 Sometimes you just want a little obscure Glam. Saraya were one of the few female fronted Glam bands of the 1980s. Hailing from the east coast, the band formed in the mid 1980s under a different name. Eventually becoming “Saraya” after lead singer Sandi Saraya, the band also featured Tony “Bruno” Rey (guitar), Gary Taylor (bass), Gregg Munier (keyboard) and Chuck Bonfante (drums). Saraya landed a deal with Polygram and released two albums. Sandi was once married to Brian Wheat, the bassist for Tesla. The marriage didn’t last and neither did Saraya…but the songs we have are true gems and so are the videos! Check out these *very* Glam clips:

5.0 out of 5 stars A perfect example of that special 80s sound, September 26, 2008
By R. Baxendale II
Like late-eighties bands Femme Fatale, Siren, and Transvision Vamp, Saraya was another all-male group with a female singer. Unlike those groups, however, Sandi Saraya’s band had a powerful sound and a punchy, hook-driven hit song: “”Love Has Taken Its Toll”” (a perfect example of the eighties sound I love so much). A close friend of mine was so taken with the group’s name that she christened her daughter Saraya.

5.0 out of 5 stars get it if you can…, November 16, 2007
By David Witt “”music fan”” ((far) outside detroit) –
i remember the first time i heard love has taken it’s toll on the radio back in ’89. i bought the cassette a few days later and was hooked. i still, to this day, have it. i picked up the LP about two years ago off of ebay for about $25 or $30, while trying to get some “”hard to find’s”” on disc. reasonable, for something nearly unavailable. it is one of three or four that i treasure in my collection! i don’t understand why they came and went so quickly. another poor job by record company big-wigs would be my guess. if you can stomach the price, get this rockin’ gem while you can.

5.0 out of 5 stars A Timeless Love, May 7, 2007
By H. Tapia “”The Hwyman”” (Ashburn, VA
I discovered Saraya in 1989 when I was a junior in high school. I originally had the cassette which I eventually wore out. I then spent near 3-4 years searching every used store I came across for this gem. I eventually found a copy all the way across the country in San Francisco. This of course was before online auctions really took off. Suffice it to say, this LP is that good! I never expected to love this LP as much as I would over time, but it’s just one of those rare albums that you can listen to for a while and then put away only to come back to several months later and have it be fresh. Sandi’s vocals are amazing, the lyrics are heart-felt (“”Love Has Taken Its Toll”” is a permenant fixture in the soundtrack of my life), and the instrumentation is moving (I especially love the instrumental part at the end of “”St. Christopher Medal””). Get this LP! They just don’t make music like this anymore.

5.0 out of 5 stars Unforgettable., February 10, 2006
By 2112
I first heard Saraya late one night in 1989 (spring?)on the radio, and was at the record store the very next day to buy this album. The other reviews here all have something important to say about the experience of hearing this band and the way you can become very attached to both the music and the memories attached to it. They really were a very “”solid”” band in every way, and Sandi’s vocals were my idea of perfection in that style of music. It’s just too bad they didn’t last longer than they did. I don’t know what happened, but I’ve always guessed they just came out at the wrong time. As someone else mentioned, the Seattle grunge sound got really big around that time, and I guess the music companies just went in another direction. Whatever the reason though, I think we all missed a lot of potentially great music with the loss of this band.
If you’ve never heard Saraya, but like ’80’s style hard rock along the lines of Heart, Pat Benatar and believe it or not, Dokken (the guitar is a little “”George Lynch-ish”” at times in my opinion), don’t hesitate to check this LP out. It’s worth every penny.

2 of 2 people found the following review helpful:
5.0 out of 5 stars Best Female AOR/Melodic Rock!!, September 20, 2005
By Stuart M. Tysinger “”Stryper Fan”” (Johnson City, TN)
Saraya is the best female AOR/Melodic Rock band in music. They released two vey solid albums but for some reason could not get support from the record labels. They should have been huge selling out arenas. But unfortunately this LP came out in 1989. And as we know, Grunge killed any hopes of success for AOR/Melodic Rock Bands. If you do not have this LP get it, you will not regret it.

2 of 2 people found the following review helpful:
5.0 out of 5 stars A GEM OF A LP!, July 29, 2005
I first purchased this on cassette tape not knowing much about the band but the tape ended up on heavy rotation in my Walkman. Luckily I was smart enough to get it on LP when it became available and all I can say is that it is still a gem in my book.
The band rocks, the songs are excellent and Sandi Saraya has a fantastic and beautiful voice. From the ballad-like ‘St’ Christopher’s Medal’ to the hard-chargin’ ‘Runnin Out Of Time’, she delivers! One of the best rock female vocalists I have heard and the band is right there with her. Just a brilliant LP. If you can find it, it’s a no-brainer!!

5.0 out of 5 stars A True Rock Gem, June 20, 2005
By peyeinthesky (Chicago) – See all my reviews
I first heard Saraya, by chance, walking by the television on MTV in 1989 and bought the album immediately. A musician myself, I was really into the album and wrote to Sandi to ask about her inspiration behind some of the tracks. Believe it or not she wrote back and took the time to converse with a 14 yr. old fan. You’ll find solid compositions and beautiful arrangements throughout the entire album. Put your headphones on and lay out under the stars and you’ll see what I mean!

4.0 out of 5 stars A lost gem, April 2, 2005
By Keen Anthony (Scottsdale, AZ) – See all my reviews
Once known as “”Alsace Lorraine””, the New Jersey based Saraya was groomed by Polygram to be the next Bon Jovi. Unfortunately, Saraya never achieved that critical success, and the band faded into rock & roll obscurity fairly quickly after just releasing two albums.

Musically, Saraya had a straight-forward hard rock style coupled with heavy metal riffs and passionate singing that made the band fit in well in the late 80s hair metal scene. While they lacked the punch of many of the heavier hair metal acts of the day, Saraya’s music was not bubblegum-flavored pop metal. The group was influenced by the female-powered rock & roll of Pat Benetar, Heart, and The Pretenders, and Sandi Saraya’s heart-felt vocals elevated their music above the commercial fray. Her singing never came across as shallow or manufactured, a fact that won the Saraya many loyal fans.

Saraya’s 1989 self-titled debut was not a landmark album by any means, although it did peak at #79 on the Billboard 200 that year. It is a good solid body of work from end to end , opening with “”Love Has Taken It’s Toll”” a favorite play on MTV’s original “”Dial MTV”” and “”Hard 30″” afternoons shows. This album, as with their second recording, “”When the Blackbird Sings””, is a now out of print. Both albums are worthwhile purchases, but unfortunately, neither album features “”Timeless Love””, a power-ballad that appeared on the motion picture soundtrack to Wes Craven’s Shocker. “”Timeless Love”” is a clear example of the power and emotion Saraya was capable of achieving, and it is perhaps one of the best rock power-ballads ever performed.
This album takes me back to such a fun time in my life. Iwas 18 and could relate to these tunes so easily, whether I was having trouble at home with my folks or trouble with my girlfriend at the time or something like that. I miss music like this so much. Saraya is awesome.

5.0 out of 5 stars Cutting Edge sound for its time, September 27, 2003
By Phillip W. Tripp (Plainfield, IN United States) –
Saraya was one of the best female lead hard rock bands of the Late 80’s. Sandi Saraya, once married to Brain Wheat, the bass player for Tesla, has such an awesome vocal range. Each track blew me away the first time I heard it, and it still continues to melt my heart away to this day. “”Love Has Taken It’s Toll,”” was the first and best selling single from the LP, followed by, “”Back To The Bullet.”” Every song is a personal favorite! If you can get it, get it!!! “ 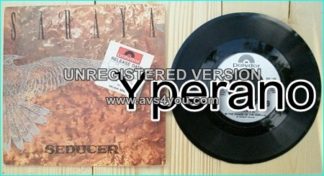