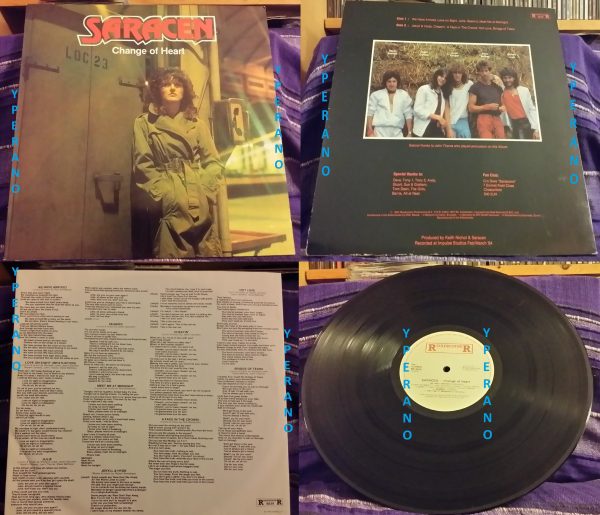 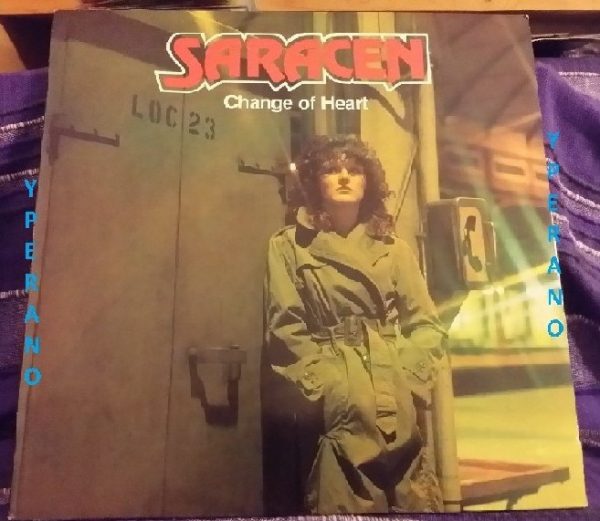 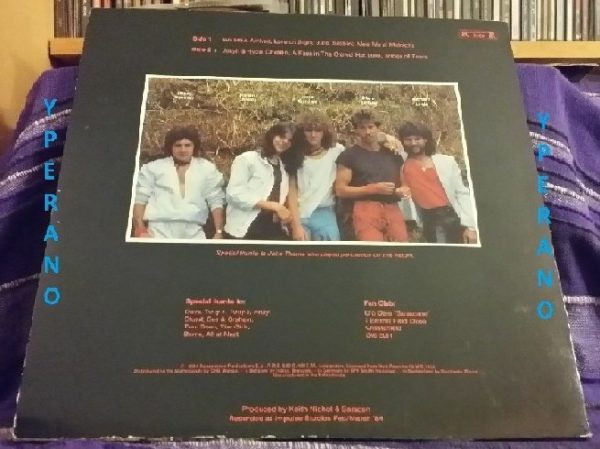 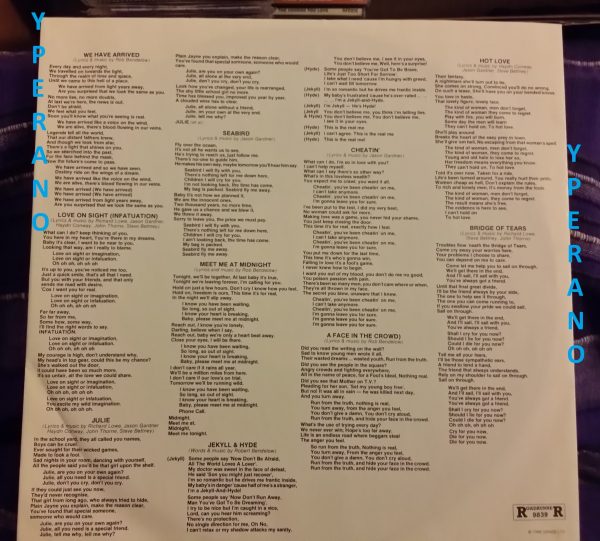 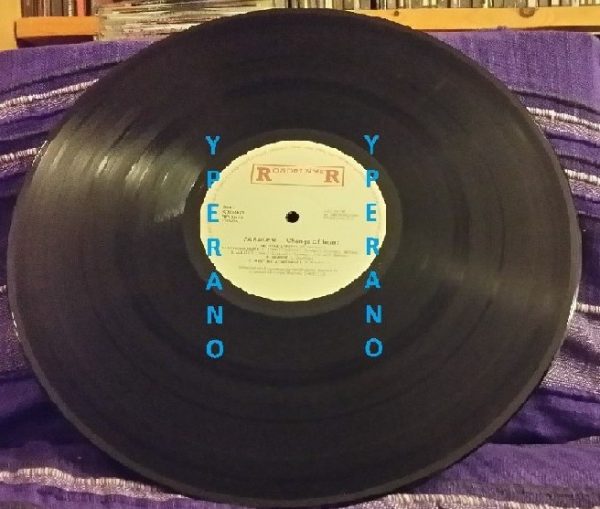 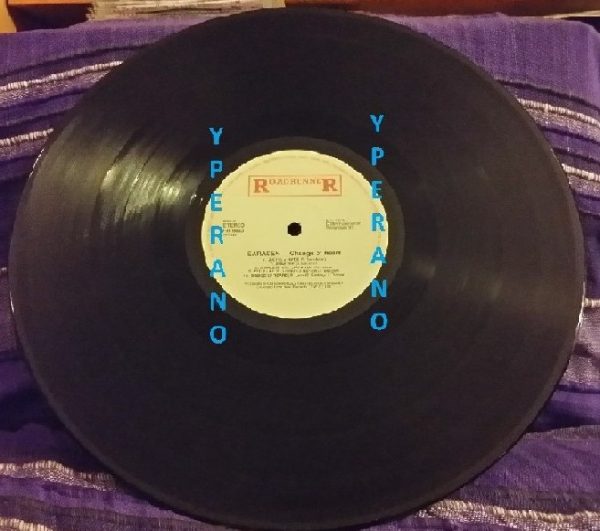 Saracen is NWOBHM band formed in 1976 in Matlock, Derbyshire under the moniker Lammergier. As Lammegier they toured extensively cross the English ‘Midlands’ during the ensuing years. In 1981 they re-emerged as Saracen.

An Exercise in Songwriting Brilliance – 85%
Music appreciation is a weird thing. For a band to be considered good usually it musters up the ability to perform a genre well, am I right? But also, we want some spice to the sound of a band (and its execution); putting its own spin on the genre its own take so to speak. People argue that a band sucks, or an album sucks, because its groove, not thrash, or its too hard rock, not heavy metal or a bands release was too thrashy, and and not deathy enough. Interesting, then on the other hand bands get blasted for performing a genre without straying from the straight forward formula (riffs, subject matter, song titles, speed etc); so what we want as music fans in an album or band is a mixture of a genre performed well (with all of its hallmarks, clichés and expected attributes) coupled with a bands original spin or take; an original flavour something that makes it stand out within a field, yet it still can be classifiable as fitting within the boundaries of said genre. Saracen is a great example of this issue; retaining just enough of the NWOBHM sound (the signature British toned vocals of Steve Bettney, the low, speedy rockin-ness of tracks like Rock of Ages) but offer far more depth in their approach, which arguably sits astride the boundary of 70s progressive rock. This is an enjoyable mix which is at times amazing (largely evidenced in their debut full-length) and perhaps one of the best examples of how to be part of a genre and have a powerful unique sound added into the mix.

On this album, Saracen retains much of the keyboard infused, deep lyric-focused progressive elements of their first album, crafted together with attributes of the NWOBHM. While this one is interesting, thoroughly enjoyable and drenched in songwriting proficiency and re-playability it perhaps fails to top their more epic début album. On here we have some great progressive numbers, as well as some more melodic, softer, pop rock sounding songs exhibiting the bands Yes and Heart influences. While there are strong numbers a plenty they fail to have that mindblowing epicness you find on the first one (with at least four songs over six minutes to my memory) with Ready to Fly being an obvious masterpiece). Anyway, while we still have some deep subject matter much of the content seems to be more down-to-earth such as the pop-sounding Julie – a very sift edged number. Saracen, though producing an awesome album here, seems to shift focus to a more conventional 3-minute song formula and while they do this incredibly well (The thundering Jekyll & Hyde) it does make the album seem to lack in the mind-blowing epic qualities of the first album.

That said there are some amazing cuts on this offering. The aforementioned features great subject matter and showcases awesome lyrics, in a more straightforward, heavy (cf. the majority of their material) NWOBHM sounding song. The strong opener We Have Arrived with its title that seems to conjure up something like youd find on Def Leppards début, is actually an energetic, progressively space-themed rocker, with heavy doses of keyboards and those trademark vocal harmonies and choruses. An extremely well-written song that showcases Bettneys awesome vocals. Though his voice has that very typical NWOBHM tone he can hit notes very well, sounding full of conviction and passion, and he executes with a beautiful vibrato. They keyboard solo in this one is very sweet, and the guitar lead, which comes in harmonizing is very much the icing on the cake. Phenomenal number this one, with a chorus that you may just want to sing along to.

The strong ballad Bridge of Tears features piano, bongo drums and soulful guitar leads. Vocals are awesome on this one, again evoking that Rob Halford comparison, with that meaningful vibrato, and heartfelt lyrics. Here Saracen not only shows their originality within the genre, but proves they are probably one of the best NWOBHM bands to attempt the ballad yes its its that good, reminding me of Last Rose of Summer by Judas Priest. Not exactly conventional for the NWOBHM genre, but here they really shine through with their originality as a band. Guitar leads in this are as well structured and toned for the subject matter as youre going to get.

Cheatin though not a favourite track, is a very well sung symphony or almost Halford like vocal harmonies, crisp drums and dramatic guitar leads bearing much similarity to 70s rock like Grand Funk Railroad. Love on Sight is another more conventional, pop-rock sounding number, rich in female backup vocals, features a slower pace, and straightforward love-themed lyrics. A very poppy chorus on this one is the focus, and this song doesn’t feature the complexities of their other works. The pop sound is perhaps most palpable in the track Julie as I mentioned before which is kinda run-of-mill, though not a bad cut; the subject matter is a little familiar, and it doesn’t grab your heart like Seabird or Bridge of Tears. Back to the more straightforward rockers now Hot Love is arguably the most NWOBHM sounding track on the LP and does kick a bit of ass. When this band attempts the genre, they do it better than many, bringing interesting riffs, good structures, more impressive lyrics, and enough of that ass-kicking roughness that made bands like Badger so great. Keys continue to feature in even these tracks, bring additional melody and thickness.

All in all a great album indeed. Saracen are easily one of the more original, and technically proficient bands of the NWOBHM. With the ability to tackle various sub-types of song, and perform either the progressive 70s rock stuff, the poppy Heart-influenced stuff, or the rough and ready NWOBHM stuff, and to do it well, Saracen are certainly a force to be reckoned with. More emotion is detectable in the songs, and riffs stick out more. The harmonies in this one are awesome and showcase song-writing talent. Basically, Saracen are experts at blending various genres/influence to craft a unique sound of their own. Their originality and depth makes them streets ahead of many contemporaries, but their ability to write ass-kicking rockers means they can hold their own against bands like Samson and Diamond Head. While this album kicks a tonne of ass, the lack of drawn out epics a la the début album is a slight disappointment deeper themes are explores, but not elaborated upon like they were in tracks like Dolphin Ride and Crusader and the aforementioned Ready to Fly off the first album. Either way this is still a killer album that sits right up there in my favourite NWOBHM records. Well worth investing in.