CD is housed in a jewel-case with front and back artwork. 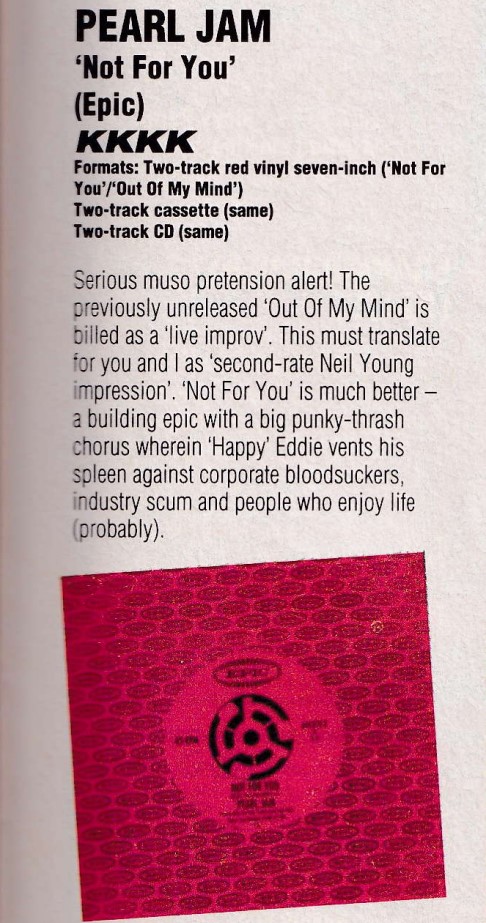 “Not for You” is a song by the American rock band Pearl Jam, released on March 21, 1995 as the second single from the bands third studio album, Vitalogy (1994). Although credited to all members of Pearl Jam, it was primarily written by vocalist Eddie Vedder. The song peaked at number 12 on the Billboard Mainstream Rock Tracks chart.

Origin and recording:
Guitarist Mike McCready on “Not for You”:
Tom Petty sent me this amazing 12-string Rickenbacker, and “Not for You” was the first time I used it. It was like a Christmas present. One day it just showed up at my door. I called him up and thanked him. But its a cool songan Eddie song.

Lyrics:
Vocalist Eddie Vedder about “Not for You”:
I believe…that there is something sacred about youth, and the song is about how youth is being sold and exploited. I think I felt like I had become part of that too. Maybe thats why sometimes I have a hard time with the TV end of music and much of the media and the magazines. When I pick up a magazine, I just count how many pages of ads before the first article starts. You go one, two…up to fifteen to twenty or more. And then in the back you have phone sex ads. So I’ve pretty much had it. I don’t want to be the traveling medicine show where we go out and do the song and dance and someone else drops the back of the wagon and starts selling crap. I don’t want our music to sell anythingor anyone else use it. There are a lot of middlemen, somewhere between the band and the audience. I know you need some people to help facilitate things for the live show, and I’m not saying that I don’t appreciate these people but…In the last ten or fifteen years, there have been a lot of changes in music, and somehow the percentages being charged [by the concert industry] got out of hand. We also don’t want to be part of all the marketing tools or whatever, but believe me, we have been. [That happened] on the first album and thats probably why we are where we are now, but it was hell and I feel awful about it and I’m not going to do it anymore.
In another interview, Vedder stated:
These attitudes out there…that its the industrys music… And its not. Its mine. And its yours. Whoevers listening to it. Its mine and its yours. And everybody in between, they’re the distributors. I think that something like a music channel can be very powerful. Sometimes they think they’re the ones who decide whats heard. I think thats a dangerous situation. And, I think, whats more dangerous is that they think it belongs to them. Thats probably what “Not for You” is about.

Release and reception:
“Not for You” was released as a single in 1995 with a previously unreleased B-side titled “Out of My Mind”. The song peaked at number 12 on the Billboard Mainstream Rock Tracks chart and number 38 on the Billboard Modern Rock Tracks chart. Outside the United States, the single was released commercially in Australia, Austria, Canada, Japan, the Netherlands, South Africa, and the United Kingdom. “Not for You” reached the top 40 in the UK and peaked at number 29 on the Australian Singles Chart. “Not for You” reached the top 30 in Ireland and was a top ten success in New Zealand.

“Not for You” was first performed live at the bands March 7, 1994 concert in Denver, Colorado at the Paramount Theatre. The song was performed on Saturday Night Live – without the explicit lyrics – in April 1994

Be the first to review “PEARL JAM: Not for you CD PROMO. Rare 1995 US 1-track promo CD single ESK6858. Check videos” Cancel reply