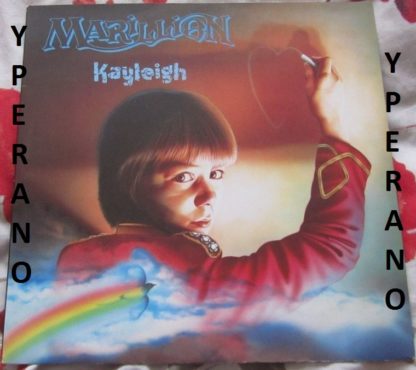 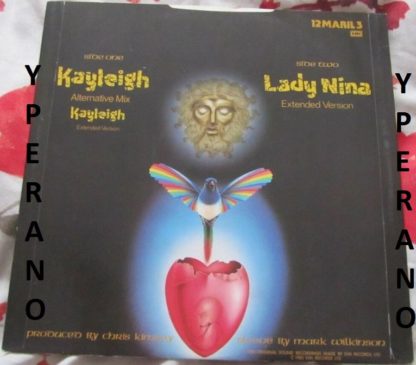 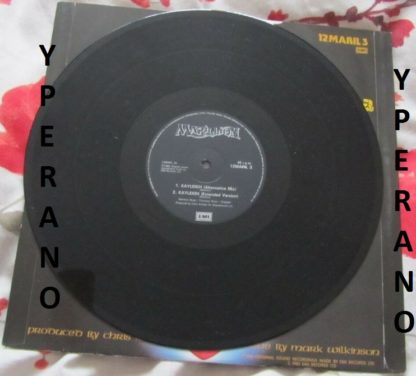 MARILLION Kayleigh [Kayleigh (Alternate Mix), Kayleigh (Extended version), Lady Nina (Extended) These versions here (on this 12″) are different from both the 7″ version AND the album version!

No durations on this issue

The song ‘Kayleigh’ has become one of those indestructible rock anthems from the Eighties, a staple on the radio and a big hit when it was originally released as a single in 1985. Although the lead singer and lyricist of the band, Fish, had at one point dated a woman whose forenames were Kay Lee, the song was more a compilation of several different women with whom he had had relationships. According to him, the song was ‘his way of apologising to some of the women he had dated in the past.’

The single reached number 2 in the UK singles chart and number 16 in the Dutch Top 40. The name Kayleigh became very popular as a result of this song. In late 2005, 96% of Kayleighs living in the United Kingdom were born after 1985.

Marillion won’t ever sell out. Very English and very Marillion, but desperately attractive and potentially commercial too.

In 1985, five years and three albums after their formation in Aylesbury, Marillion became one of Britain’s biggest rock bands. Their Misplaced Childhood album topped the UK album chart and on during its tour, they played seven nights at London’s Hammersmith Odeon. They even played between Bon Jovi and headliners ZZ Top at Donington.

Given that Misplaced Childhood was a full-blown concept album, such feats are difficult to credit. Reading between the lines, Marillion’s unlikely defiance of the UK’s anti-prog rock bias is attributable to one song in particular from that album.

EMI Records, understandably hesitant after Marillion’s Fugazi, had allowed them to proceed down the conceptual path on the condition that the next album contained a hit single. And Kayleigh, written as a misty-eyed apology to several of Fish’s past girlfriends, was a sure-fire crossover success from the moment that Steve Rothery’s fragile, icing-sugar-topped guitar motif jangled over the airwaves.

Rothery came up with the distinctive riff while trying to show his then girlfriend how to combine melody and rhythm in one piece of music.

“I sometimes wonder if we would still have written Kayleigh had she asked whether there was something good on the telly instead,” he recalls.

“I’d wanted to write a song about a girlfriend I’d split up with, whose name was Kay,” Fish explains. “Which of course we couldn’t do. So we added her middle name, Lee, and it became Kayleigh instead.”

In the sleeve notes for 1998’s remastered edition of Misplaced Childhood, Fish states that Kayleigh catalogued his “total inability to enter into and maintain any relationship”. The lyrics seem to cast him as the mistreater rather than the mistreated.

“Because I was in denial I might have swapped things around,” he acknowledges. “But it wasn’t just about Kay, it was inspired by three or four different people in my life.” Blame issues aside, as an exercise in catharsis the song allowed Fish to spew his guts in a poetic way, reminiscing about ‘dancing in stilettos in the snow’ and ‘loving on the floor in Belsize Park’.

“That actually happened in Galashiels with a girlfriend called Lesley. But every one of those lyrics is true,” the singer affirms. “My favourite line was the one about ‘cherry blossom in the market square’. That’s beautiful.”

Aware of the song’s importance, Marillion allowed it to develop at its own pace. When they previewed half of the Misplaced Childhood album at Hammersmith Odeon in December 94, Kayleigh was included but in extremely formative lyrical state.

“We would just jam it, and then see what worked and what didn’t,” Fish recalls.

Even when the band arrived at Hansa Studios in Berlin to begin recording, the second verse of Kayleigh still remained unfinished. Fortunately producer Chris Kimsey had a solution.

“He told me: ‘We’re all going out for a meal. We’ll be back in two-and-a-half hours; get it fucking done’,” Fish guffaws, adding: “Chris did at least gave me a load of booze and some other stuff, which I’ll leave to your imagination.”

Understandably, the band were disappointed when Kayleigh was kept off the top spot in the UK chart by You’ll Never Walk Alone, a charity single by The Crowd that was released in the wake of the Bradford City fire disaster. In the US Kayleigh reached No.74 [it would be their only ever entry in the BillboardHot 100].

Of the immediate effect on the band’s career, Fish says:

“Releasing a song like Kayleigh sent our career into hyperdrive – like that moment in Star Trek when the screen goes white. One minute we were playing in France, I think it was in Toulouse, to 100 fans, and the next we had our own private Learjet. I still remember singing it on the Wogan show. Unintentionally, I gave a cheeky little smile to the camera at the end, and afterwards our TV plugger said: ‘That was brilliant. You just sold another 100,000 singles’.”

But there was a flip-side. As well as Marillion suddenly finding themselves in demand with TV and radio shows and newspapers and magazines that previously hadn’t known or cared about them – and might never do so again – the pressure to deliver an equally commercial follow-up became an unbearable burden.