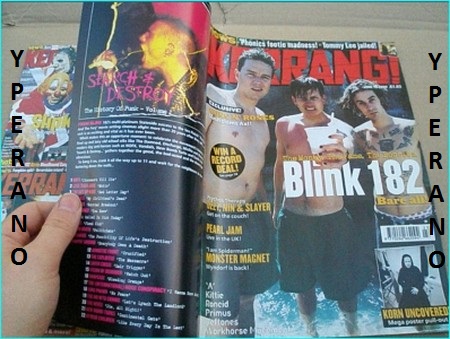 Kerrang – the longest running and most famous UK Rock and Heavy Metal magazine. These mags have now become ultra collectable pieces of music memorabilia and have featured some of the biggest and smallest names in Rock/HM.
Buy a piece of rock history today!!!!

here’s to the June 10, 2000 issue of Kerrang!, where we were splashing around with pop-punk phenomenon blink-182, who were then known simply as Blink 182.

The Get Up Kids and The Exploited on the same album together? FINALLY!

There are some banging songs on the CD and in the days of pre-streaming, probably introduced a hell of a lot of people to their first experience of many brilliant bands.

metal master Ozzy Osbourne was to join hip-hop masters Wu-Tang Clan to collab on a song called For Heaven’s Sake, for the fantastically titled LOUD ROCKS compilation album later in the year.

… a virtual snigger in the direction of the likes of Dave Wyndorf likening himself to Spiderman, Slash claiming that he’d never go back to GN’R for “any amount of money” and blink-182 chap Mark Hoppus promising K! writer Paul Brannigan that even the band’s penises were offensive.

top photo of Christina Aguilera being held up by the band Lit. Frontman A. Jay Popoff appeared to be about to lick her ankle. We’re not sure why, but that’s okay. Sometimes it’s best not to know everything. Enjoy the snap. And, Axl Rose’s head onto the body of a musclebound chap doing weights.

Here’s something that seems quite innocent now – putting rockstars’ names into a computer spellcheck for a panel.

Pearl Jam ‘s Wembley Arena  performance was worth the full 5K treatment. ‘Pearl Jam are having fun’. So there you have it.

Ozzy Osbourne playing with Primus at The Roxy in Los Angeles. all five of the Ks available were promptly dished out.

Deftones’ monolithic White Pony album was the lead album review that issue; elsewhere in reviews Cro-Mags’ Hard Times In An Age Of Quarrel only got 2Ks, and a band called the Groovy Ghoulies were also given just 2Ks for their album Travels With My Amp.

riff deity Slash,  mentioned that Guns were considering getting back together.

And so to our cover story with cheeky pop-punk upstarts (well, then they were) blink-182. The lads were on a charm offensive, or maybe it was just the latter, so keen were they to say and do outrageous shit to make an impression on us. Tom Delonge wanted to show his penis when he wasn’t farting mid-interview. Mark Hoppus revealed how his fiancée was horrified when he was onstage joking about masturbation and eating poop. Travis didn’t really say anything. “If we took ourselves seriously I feel like we’d be throwing away a great opportunity to act like idiots for a few more years,” Mark said. 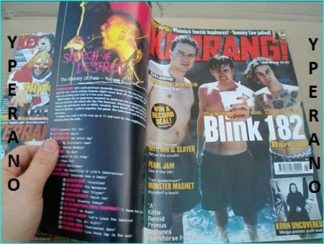