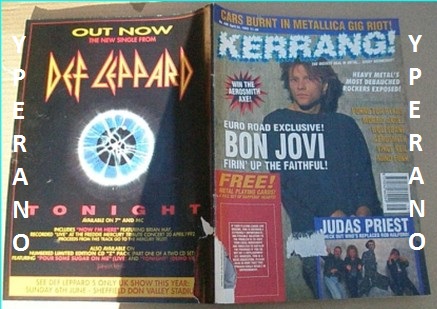 ALL PAGES ARE IN GREAT CONDITION. Only the front cover is a bit damaged. Pages inside are more than OK.

Kerrang – the longest running and most famous UK Rock and Heavy Metal magazine. These mags have now become ultra collectable pieces of music memorabilia and have featured some of the biggest and smallest names in Rock/HM.
Buy a piece of rock history today!!!!!

ALL PAGES ARE IN GREAT CONDITION. Only the front cover is a bit damaged. Pages inside are more than OK.

First up, check out this gnarly photo of Alice Cooper doing something gnarly to one of his gnarly-looking stage mannequins. At least, we hope that’s a mannequin, otherwise the poor lass is / was in a very bad way indeed. Still, we thought it fitting to accompany this image with a really rather serious quote from the great man opening up about his addictions. Oops…

Bare arse #1 klaxon! Here we have Mr Ozzy of Osbourne being a naughty boy onstage, flashing his buttocks for all to see. ‘A man who perpetually plays ping-pong with insanity’ we said. It was all part of our investigation into the most debauched characters in rock. Yeah, fair.

Aerosmith were scooping four kookin’ Ks for their 11th album, Get A Grip.

the Judas Priestlads hit top marks for their Metal Works ‘73-‘93 anthology, which we declared “the heavy metal album of 1993 and make no fucking mistake”…

hair rockers Warrant was a hot new band on the scene worth paying attention to. Here singer Jani Lane passed out on the band’s tour bus, wearing a Warrant cap. This image accompanied the news that he had just left the band to pursue a solo career. Though he would of course return again later that same year in September.

8-page Metallica-themed poster special? Yes please and thanks very much.

Want a sign of the times? How about this Metal Briefs guide to Kurt Cobain, a year before the Nirvana frontman’s untimely passing, in which we decreed that his band were better than Boston (listen to Smells Like Teen Spirit and More Than A Feeling, if for some reason you need context on that one), referred to him and Courtney Love as a “cute couple” and foolishly dismissed Dave Grohl and Krist Novoselic as “a couple of mates” who “stand in the background”…

So, back then quizzes were all the rage. And Kerrang! was no different. How did you find out if your answers were right or not? You turned the magazine upside down, didn’t you! That’s where we’d print the correct ones, elsewhere on the page. This did of course mean you could just cheat, but you’d only be cheating yourself. And people were a lot more honest back then. Presumably.

And so to our world exclusive cover feature with Bon Jovi on the road in Milan, where they were promoting their latest album, Keep The Faith. Frontman Jon Bon Jovi was in a quite downbeat and tetchy form, alas, bemoaning his band’s apparent lack of scene love and respect, as a result of their enormous commercial success. He needn’t have worried about that too much, because that album sold truckloads of copies as well, even if he never did quite get that elusive acceptance.

And that’s the price paid for riding the wave, friends…

Check out this pic of drummer Tico Torres bashing the life out of his kit, with a brilliant caption that requires no further comment really. Think about that the next time you go see the New Jersey behemoths live. And just watch you don’t get your ass kicked.

And on that note, here’s bare arse image #2! There’s no real reason for this one either, apparently, other than a slim excuse to use the phrase ‘bare all’ in regards to Iron Maiden bassist Steve Harris chatting about Bruce Dickinson’s recent departure from the band. Once more with feeling: it was just a different time.

They were halcyon days.… 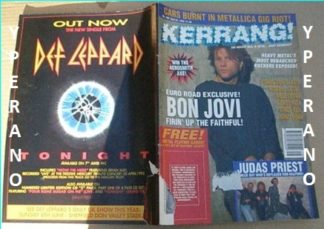